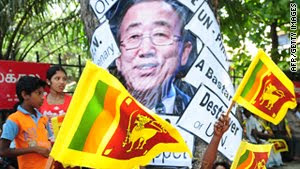 (see first post in this series: Mind the Impunity Gaps)

There is increasing pressure for justice in Sri Lanka for crimes committed in the long civil war between the Government and secessionist Tamil Tigers (LTTE) and that ended in May 2009. While the Sri Lankan government has publicly pledged to ensure justice, there are legitimate concerns its current approach will not be genuine and sufficiently punitive, and will place the burden of guilt for war crimes and crimes against humanity on the LTTE while institutionalizing impunity for crimes committed by Government forces.

“Sri Lanka’s Killing Fields”
The airing of a documentary called “Sri Lanka’s Killing Fields” on UK’s Channel 4 sparked new interest and pressure. It has now been shown to wide acclaim at the UN in New York and Geneva and recently by human rights groups in Washington, DC. The footage is indeed shocking. It documents extrajudicial killings, torture, and sexual violence allegedly committed by Government forces against Tamil civilians. The documentary is available on YouTube.

The Sri Lankan government has reacted angrily to the footage and accompanying accusations; it also claims that portions of the film have been doctored or are misleading. A BBC Hardtalk interview with a Sri Lankan MP and adviser to the President is revealing with regard to the determination of the Government’s denial and rejection of international pressure to investigate its own crimes.

UN Probe Alleges Crimes Committed by “Both Sides”
A United Nations Panel of Experts released a report in April, 2011 stipulates there are credible allegations of war crimes and crimes against humanity committed by both sides in the final stages of the war (Sept 2009-May 2009). Crimes committed by the LTTE throughout the civil war are well known, including killings, forced displacement, use of child soldiers, etc. But crimes committed by Government forces have been less exposed.

The Panel’s notable allegations are as follows:

The Government says it pursued a “humanitarian rescue operation” with a policy of “zero civilian casualties.” In stark contrast, the Panel found credible allegations, which if proven, indicate that a wide range of serious violations of international humanitarian law and international human rights law was committed both by the Government of Sri Lanka and the LTTE, some of which would amount to war crimes and crimes against humanity….330,000 civilians were trapped into an ever decreasing area, fleeing the shelling but kept hostage by the LTTE….Most civilians in the final phases of the war were caused by Government shelling…..(p ii)

The Panel was also highly critical of the Government’s commitment to accountability thus far:

The Government has stated that it is seeking to balance reconciliation and accountability, with an emphasis on restorative justice. The assertion of a choice between restorative and retributive presents a false dichotomy….The Government’s two-pronged notion of accountability, as explained to the Panel, focusing on the responsibility of past Governments and of the LTTE, does not envisage a serious examination of the Government’s decisions and conduct in prosecuting the final stages of the war or the aftermath, nor of the violations of law that may have occurred as a result. The Panel has concluded that the Government’s notion of accountability is not in accordance with international standards. (p iv)

The Government’s “Lessons Learnt and Reconciliation Commission” was described by the Panel as “deeply flawed.” (p v).

In response, the Sri Lankan Government vociferously rejects the prospect of international judicial intervention, argues the “report is based on patently biased material which is presented without verification,” and claims that reconciliation should come above all else. A commitment to reconciliation above prosecutions is a familiar refrain for governments wishing to disguise impunity for their own crimes (e.g. Indonesia, Rwanda, etc.)

The impartiality of investigations does not always translate into a balanced prosecutorial strategy. This will be a considerable challenge for international or national trials for Sri Lankan atrocities. International courts struggle to prosecute the winners of conflict, particularly because of a reluctance to create a moral equivalency of crimes on both sides, and if perpetrators are in positions of political power and prosecuting them could risk instability or a loss of cooperation. Impartial prosecutions in national trials are likely to be impossible in this case, owing in no small part to what the Panel calls the Sri Lankan government’s discourse of “triumphalism” over Tamils and “exclusionary policies” that prevent domestic victims’ groups from successfully exerting pressure on the government.

Prospects for Closing the Impunity Gap
Pressure from the UK and advocacy from human rights groups seems to be having no effect so far. Most of the pressure is on the UN Secretary-General because the Panel was commissioned by his office and with the purpose of advising him on further investigations and accountability. Victims and human rights groups are pressing him to take up the Panel’s clear recommendation to establish and official international commission of inquiry. Such a formal inquiry, as past experience has shown, would pressure the Sri Lankan government to genuinely investigate and hold war criminals accountable, and absent such a response would generate support for an international tribunal. If not an ad hoc or hybrid tribunal, a referral to the International Criminal Court would have to come from the Security Council as Sri Lanka is not a State Party to the Rome Statute. But China’s support for Sri Lanka and its autonomy in accountability makes this unlikely to happen. There is great risk that the Sri Lanka case will fall through the cracks.