Friday Nerd Blogging: Late to the Party (Part the Second)

We saw HPatDHpt2 (as the young’ns are calling it) this evening. It was quite good: action-packed, emotionally satisfying, and all that. We sat next to a group of hipster teenagers who were extremely psyched throughout the whole thing–they clapped, they cheered, and were very upset when my daughter interjected commentary (“That’s a lot of Death Eaters!”). This provided an important reminder of how a whole generation of kids grew up with — or, more accurately, aged along with — the Harry Potter novels. Anyway, I may be doing a review for a “real” online outlet this weekend; I’ll post a link if it comes together.

But that’s not the subject of this post. I discovered web comics relatively recently; although that makes me very late to the party, I still want to point to two superlative sf/fantasy publications available online.

First, Girl Genius. While my wife was out of the country last year, I stayed up all night reading the adventures of Agatha Heterodyne and her (ever-increasing) cast of supporting characters. Produced out of the gleefully demented minds of Phil and Kaja Foglio, Girl Genius has won numerous accolades — in this case, well-deserved ones. 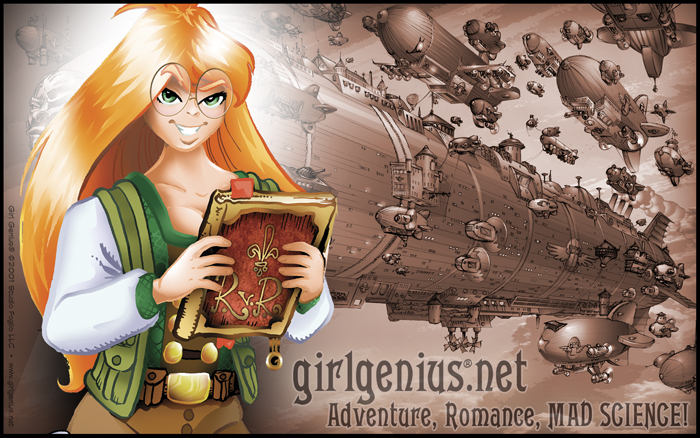 Agatha lives in a “steam punk” world, but that dubious quality doesn’t overwhelm the comic. Instead, it provides a whimsical  backdrop for wacky adventures in the mold of late nineteenth- and early twentieth-century fantastic adventures –albeit updated in sensibility, particularly in terms of gender roles.

In Girl Genius, “sparks” — super-genius mad scientists — are in the driver’s seat of world events. At its start, a powerful spark exerts hegemony over Europea from his “city” of dirigibles and other aircraft. His position comes as much as anything else from a power vacuum left by the departure of the Heterodyne brothers — members of a long line of “sparks” who turned from villainy to heroism, but then disappeared under mysterious circumstances. The plot becomes more convoluted every few weeks, so that’s as far as I’ll attempt to explain it. The key points: Girl Genius is more than a page-turning yarn, it is often downright hilarious. I snorted a caffeinated beverage during a certain sequence involving a coffee machine.

Second, Gunnerkrigg Court. This gem is even harder to describe than Girl Genius. A female-centric Harry Potter on acid? Maybe. Antimony (Annie) Carver arrives at the mysterious Gunnerkrigg Court. Within a few panels, she befriends a sentient shadow and builds a robot. Then the series gets weirder. Annie’s mother is dead, her father has disappeared. She becomes best friends with Katja Donlan, a scientific genius (she makes a gravity-field generator out of a thermos and coat hangers). Katja’s parents not only teach at the school, but also were schoolmates with Annie’s father and mother. 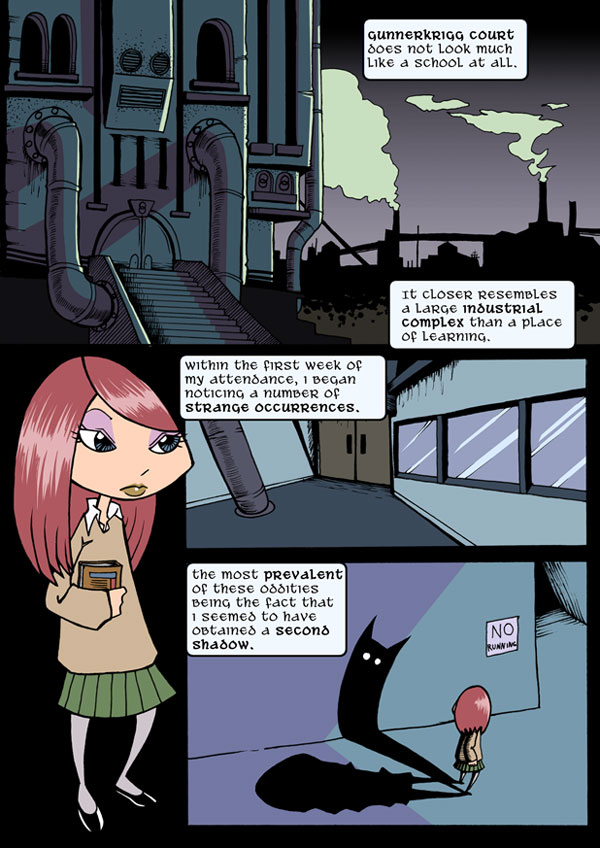 Gunnerkirgg Court’s author, Tom Siddell, pilfers liberally from Native American and European folklore, Egyptian mythology, and just about any other source you might imagine. The drawings are deceptively simple, evocative, and sometimes a joy to behold. Despite my — and particularly my wife’s — concern that some of the subject matter is inappropriate (which it is), Lyra loves it so much that she’s stolen my print version, makes me read it aloud, and reads it to herself day and night. I console myself with the fact that Gunnerkrigg Court is full of powerful, competent, and resourceful female characters. And that Siddell does a wonderful job alternating between melancholy, a little bit scary, and hilarity.

Gunnerkrigg court is also the recipient of a number of completely justified awards.

So, if you’re like me and have been missing out, go read. If you prefer print versions, there are bound collections of the comic, as well as a novel. Same goes, as I’ve already implied, for Gunnerkrigg Court, although only the first volume is currently available (at least for a reasonable price).