Assessing the Arguments Against GI Jane: The Combat Exclusion for Women Part I 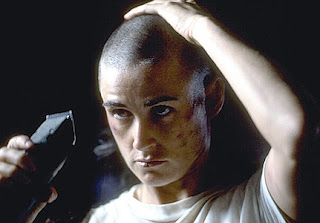 As American troops trickle back from Iraq and-eventually- Afghanistan, it seems like the perfect time to examine the lessons learned from the last decade of warfare. One of the policies requiring a review is the combat exclusion for women. Although most positions within the US forces have been opened up to women over the last 50 years, there has been adamant efforts to sustain rules which prohibit women from joining the so-called front lines of conflict in combat roles. Many of the remaining justifications for this exclusion are based on expired research (or no research at all), and outdated or irrelevant assumptions about military operations (including the idea of a clear front line).

First, some quick facts: over 130 women have died in Operation Enduring Freedom and Operation Iraqi Freedom; women are excluded from 9% of all army roles, and 30% of active duty roles and 38% of marine positions are closed to women; two servicewomen have been awarded the Silver Star- the military’s third highest honor for valor in combat.

The arguments for sustaining the exclusion can be divided into three categories: physical standards, the moral argument, and the cohesion hypothesis.

The focus on physical standards is a legitimate one. Women and men are just different physically, particularly in terms of body fat and upper body strength- not to mention the fact that women menstruate and get pregnant. There are no feminist arguments that can undo these differences. There are a couple of worthwhile considerations here: 1. standards have increasingly been adjusted in training to recognize the difference in male and female bodies 2. there is growing research indicating that a single standard isn’t necessary for operational effectiveness 3. some research shows that tasks can be adapted (using two people to lift, for example) to allow women to succeed.

The second argument against women in combat is less tangible and certainly impossible to measure- the moral argument. This is the position that women simply ‘don’t belong’ in combat. It may seem like this would be irrelevant to policy-makers; however, in senate hearings and in much of the literature on the combat exclusion this position emerges. A quote from Gen. Merrill A. McPeak, a former Air Force chief of staff summarizes this position, “I just can’t get over this feeling of old men ordering young women into combat…I have a gut-based hang-up there. And it doesn’t make a lot of sense in every way. I apologize for it.” The moral argument is an important one to take notice of. Research and the interviewee’s response indicate the existence of deeply embedded beliefs about men and women’s valid place during conflict. In many ways it is difficult to disentangle the moral argument from the physical standards and the cohesion hypothesis as these embedded beliefs seem to inform and influence much of the debates surrounding women’s participation in combat.

The final, and perhaps most significant, argument for keeping women out of combat roles is the cohesion argument. Or, what I call the cohesion hypothesis. According to this position, the presence of women affects the emotional bonds, friendships, and trust amongst troops and therefore jeopardizes the overall effectiveness of military units. The cohesion hypothesis is used by other defense forces across the world, and was also used to support Don’t Ask Don’t Tell. There are a couple of difficulties with the cohesion hypothesis: 1. cohesion is difficult to define and measure. In military scholarship it is defined as anything from commitment to a shared mission, trust, bonds, to ‘liking’ one another. As a result, it has become nearly impossible to test the cohesion hypothesis conclusively. 2. partially as a result of disparate definitions and partially as a result of the lack of test population, research on cohesion is all over the map when it comes to combat cohesion women.

RAND did a large study on women’s impact on cohesion in non-combat units, concluding that it was largely leadership, not the presence of women, that impacted cohesion. Despite some research indicating that women don’t spoil cohesion, it is impossible to conclusively determine if women would spoil cohesion in combat units. As the 1992 Presidential Commission looking at women in military found, “[t]here are no authoritative military studies of mixed-gender ground combat cohesion, since available cohesion research has been conducted among male-only ground combat units.”

The arguments against so-called GI Janes seem to defy the reality that women have been and are operating in dangerous, physically demanding roles in the US forces. Arguments about cohesion and standards were used to exclude African Americans and homosexuals from the US forces. These arguments were dropped and largely discredited as soon as policies changed, yet they continue to be used to exclude women from many positions with the US forces. Is the US military ready to open all positions to women? Will the removal of the combat exclusion be on the table for policy makers over the next 5 years?