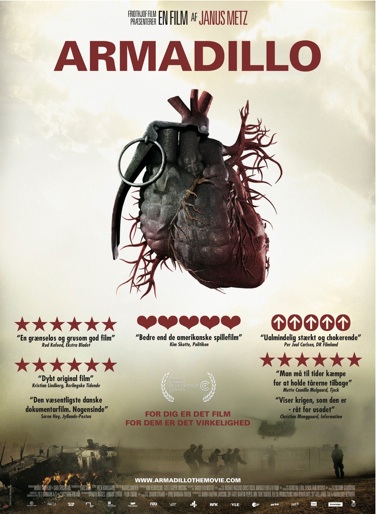 Although much of the documentary portrays standard tropes and follows a time honored narrative arc from a long line of war films, Janus Metz‘s work sparked debate in Europe because it appeared to depict Danish soldiers “liquidating” wounded Taliban fighters and piling up the bodies to take trophy photos. Thus, as the director notes, the film challenges the notion of soldiers as heroes while also showing the ways in which the experience of combat perverts the psychological state of the soldiers.

More subtly and perhaps more subversively, the film allows Afghan civilians, who are caught in the conflict between ISAF and the Taliban, to speak for themselves. Children beg for food, but they also heckle the soldiers for killing their livestock and wounding their family members and they bluntly tell the soldiers to just go home. Village elders seek compensation for destruction to their property and livelihood by ISAF forces while also trying to keep the somewhat oblivious soldiers off of their crops. There is even a wonderfully absurd encounter at a madrassa where the Danish troops try to secure support and information from the teacher at the madrassa by telling him that with his cooperation they will be able to build schools for children in the village — as if a madrassa were not a school.  The arguments of the soldiers about creating security if only the villagers would collaborate with the ISAF troops are calmly defeated through knowing smiles and gestures explaining what the Taliban will do to collaborators… The hopeless and confused nature of the conflict where violence begets more violence becomes startlingly apparent in these brief interactions.

If you did not get a chance to see this film, the full length version is available at PBS POV.