The Economist reports on advances in non-lethal weaponry, emphasizing the latest line of research into electro-magnetic weapons:

BULLETS and bombs are so 20th-century. The wars of the 21st will be dominated by ray guns. That, at least, is the vision of a band of military technologists who are building weapons that work by zapping the enemy’s electronics, rather than blowing him to bits. The result could be conflict that is less bloody, yet more effective, than what is now seen as conventional battle…

The logical conclusion of all this is a so-called “human-safe” missile, which carries an electromagnetic gun instead of an explosive warhead. This gentle way of handling the enemy – stopping his speedboats, stalling his tanks—has surprising advantages. For example, it expands the range of targets that can be attacked. Some favourite tricks of modern warfare, such as building communications centres in hospitals, or protecting sites with civilian “human shields”, cease to be effective if it is simply the electronics of the equipment being attacked that are destroyed. Though disabling an aircraft’s avionics will obviously cause it to crash, in many other cases, no direct harm is done to people at all.

This rosy view assumes weapons would only affect (or be directed at) “the enemy” – the author is grievously blind to the civilian costs of messing with power grids. While it doesn’t “blow people to bits” (and is certainly a step up from demolishing concrete buildings in urban areas), sudden loss of electrical power can be deadly to civilians: depriving them of life-sustaining medical care, causing vehicular accidents, deaths from exposure to heat or cold and disease from the collapse of water and sewage systems.

Discussing the Active Denial System later in the piece (a ‘non-lethal’ weapon that roasts people with microwaves but leaves no permanent injury) the article compares such a weapon to a “ray-gun” and suggests that the decision to end its deployment in Afghanistan stemmed from public aversion to sci-fi ray guns. (Actually, the Pentagon, not known for caving to bleeding hearts at home, had decided for itself that a pain ray might not be the best way to win hearts and minds.)

Anyway: note the fallacy in the characterization of public opposition to “ray guns.” The “ray guns” of science fiction to which the authors refer – lethal energy weapons like the Star Wars “blaster,” or the Star Trek “phaser” (a non-lethal on certain settings) are designed to kill instantly or stun, not to inflict agonizing pain on the individual. (Though they can be used improperly to inflict severe burns on certain settings, they are not designed to be used this way intentionally nor are such uses typical. In fact, in the Star Trek: TNG universe, there are treaties against weapons designed to inflict superfluous suffering – sort of a 24th century version of the Hague Conventions.) 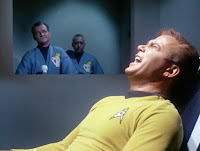 By contrast, the Active Denial System hardly fits the popular perception of a “ray-gun” at all. Indeed, it is designed not to incapacitate but to modify behavior through pain. It’s more analogous to the “neural neutralizer” or other torture devices that are depicted in the first two Star Trek series.

So to the extent that public opinion a) matters at all in weapons deployment and b) is primed by science fiction narratives (both are hypotheses not facts) I would guess that a useful first step is to understand both the weapons and the sci-fi.