What ‘Hot’ Guys Can Tell us About Masculinities and Social Norms 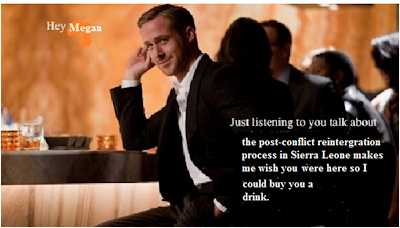 My second option for a title was: ‘How to teach masculinities by looking at pictures of handsome men.’ (Note: this photo was sent to me as a humor-gift from one of my students…I didn’t do it myself!)

Feminist Ryan Gosling, a website featuring photos of actor Ryan Gosling posed next to intelligent quips about feminist politics is a perfect tool to use in a lecture on gender- no really. Why has this website gone viral (it was even re-posted on the Duck last week)? We know from movies and interviews that Gosling is buff (he sports a mean six pack in Crazy Stupid Love) and tough (he recently broke up a fight on the street in NYC)- classic ‘manly’ stuff. Bim Adewumni at the Guardian goes further in her answer to the question ‘Why do Feminists love Gosling?’ claiming “It goes beyond looks. He was raised by a single mother to whom he’s close, and he waxes lyrical about his female co-stars and ex-girlfriends. Guys love him too- he kissed Drive director Nicolas Winding Refn on the Cannes red carpet…Basically, he’s perfect.” Putting him next to feminist engagement is so unexpected that viewers seem to find it titillating and super-sexy (or so I’ve heard). Discussions of these types of gender contrasts, as well as broader debates of who is considered a male icon (sexy, ‘hot’) at particular moments in time can actually be very useful when trying to talk about different forms of masculinity and the social expectations placed on men and women in class.
Every year when I give my first lecture on gender I struggle to find new ways to make it resonate with students. Most men in the class assume that gender is ‘not about them’ or that they can’t say anything in a gender lecture without getting lashed from me or the female students. The female students- on the other hand- appear equally isolated in lectures on gender: they seem to feel like they are supposed to have an opinion or respond a certain way about gender.
Each year I start this lecture with a brainstorming session- getting students to list the qualities associated with both masculinity and femininity. Then we have a chat about what characteristics are valued in different roles or different elements of society. I often put a box around the set of characteristics- to illustrate gender stereotypes and social expectations- and have them talk about how individual men or women that have characteristics that are outside their sex-specific box are often seen as different- or even problematic. For example, a guy who is otherwise quite ‘manly’ but spends too much time on his hair and clothing choices is meterosexual (students still think this categorization is hilarious). If this same guy was less ‘manly’ (too sensitive, too weak etc) people would probably assume he was gay- he would be too far outside his gender box. We think Ryan Gosling with feminist quotes is sexy because it is just slightly outside of the box- the contrast is interesting and exciting. He seems even more manly because he can pose next to quotations about Enloe or Mohanty but still flex his arms and seem pensive.
While working in and out of these boxes can be a boon for your hotness factor, the problem is that these boxes cause all kinds of problems for individuals who don’t fit in them. Take gay male military service members. Somehow people can’t quite get their heads around a physically dominating man serving his country in one of the most hyper-masculine institutions in the world. The public- and policy makers- have often assumed that gay servicemen must be somehow weaker and less able to bond with their platoons- that they are a threat to the military somehow. Surely they can’t embody hypermasculinity AND want to have sex with men? It is a real head trip for people with strict gender boxes.
So next time you see something like the Feminist Ryan Gosling, or semi-pornographic photos of women in bikinis with AK47s, websites like Hot Navy Chicks (for real) that feature female service members that are also apparently sexy- remember that the reason why these are sexy and exciting is that they challenge the gender stereotypes we have engraved in our minds. Unfortunately, while Feminist Ryan Gosling and other gender contrasts may have elements of ‘inside/outside’ the box, they don’t exactly do much to erase our gender boundaries. That said, I think its safe to say that these photos will keep my students awake and engaged through my first gender lecture of the year next year…we can slowly work on getting rid of the boxes.