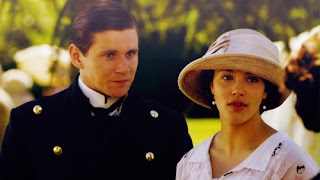 People are going mad about Downton Abbey. The Rolling Stone calls it “crack for Anglophiles.” The demand was enough to create a second “season,” and is even giving PBS the notion that it might begin to draw in some of the types who watch Showtime and HBO series, maybe even Game of Thrones fans. I doubt it, if for no other reason that there are a lot more gratuitous boobs and f-bombs on the cable networks.

I have watched it. I like it. I will keep watching it. But I am curious as to why this particular British BBC import has done so well in the US, because, as I can tell, it is a pretty garden variety Masterpiece Theater-type show. It hits on all the usual themes of British period dramas — class relations between nobles and the uppity bourgeoisie, upstairs-downstairs dynamics, the difficulties the British aristocracy faces in keeping their estates alive in a time of industrialization, the importation of wealthy American wives to solve that problem, soul mates who never love each other at the same time, the noble archetype character who loves so much but is too honorable to every say it because he feels so unworthy of receiving love (Mr. Bates), etc. And Maggie Smith as a bitch. Why do you all think it is so popular? No one has ever watched PBS before.

The thing that I find particularly interesting and noteworthy is that it shows how international conflicts change class dynamics at home. Most of these period dramas are set before or after WWI. Downton Abbey will straddle that war and show us the whole process. It is fascinating to watch the aristocracy bow to the inevitable decline in their position, even accept the legitimacy of that change, yet strive to maintain something of their former lives. But it probably appeals to me most because I am interested in war. Is that why everyone else likes it? I’d be curious to hear what you all think.

Except for you, nerds. Go back to your video games. NEEEEERRRRRDDDDSSSSS!