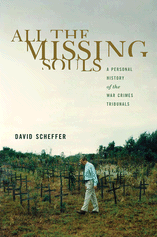 There are many good reasons to read David Scheffer’s All the Missing Souls: its insider story of the war crimes trials, written by one of their architects, the in-depth case studies on Bosnia, Rwanda, Cambodia, the impassioned defense of international justice as a moral idea.

But the part I found most useful is in the post-script, where Scheffer re-articulates his theory that we need a new concept to describe the types of crimes dealt with by the emerging law of war crimes tribunals, because these types of “mega-crimes” fall at the intersection of a patchwork of broader legal regimes, leading to conceptual confusion:

Yet none of these long-standing fields of international law suffice to describe comprehensively the legal framework of the war crimes tribunals. No term describes how the crimes being prosecuted should be described collectively. Where is the term that easily and accurately describes the totality of these crimes so that both dialogue and action can coexist?

Why care? Because clarify and cimplicity in law promote public understanding and support for the pursuit of justice… if we can discover such a term, it might help avoid the paralysis that overtakes bureaucracies mired in definition hunting rather than effective responses to evil.” – Scheffer, p. 425 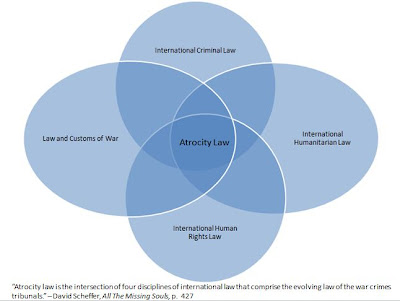 I like this venn diagram because it’s a useful teaching tool for distinguishing legal traditions that often confuse students. But I’ve also been thinking about whether Scheffer’s insight – meant to help analytically with a set of crimes that are already being prosecuted – can also help us think about public debates about whether certain actions constitute potentially judiciable crimes.

For example, how might this come to bear on the central problem in the targeted killings debate: the fact that no single legal regime holistically covers the kind of international legal problem posed by the US’ assassination campaign abroad? For law of armed conflict types, the question is whether the weapons themselves violate the law (I think not) and/or are being used by the appropriate actors (it depends), consistently with the principles of proportionality (it depends). From a human rights law perspective, these are summary executions plain and simple, but it’s tricky because if war law applies (I think not) then some of these provisions are arguably murkier. In terms of humanitarian law, which also outlaws summary executions of both civilians and noncombatant soldiers even in time of war, a question is whether the targets are non-combatants when targeted (I think generally yes). Since commentators can bicker over which of these regimes applies, the question of international criminal culpability, either by specific pilots or by national leaders rarely comes up.

How would the concept of “atrocity law” help? Does the US’ “targeted killings” campaign constitute the type of international crime that could be construed as falling unquestionably at this intersection? I don’t know but I’ll punt this to readers: have a look at Scheffer’s definition (pp 429-430):*

“These are high-impact crimes of severe gravity and a highly orchestrated character, that shock the conscience of humankind, result in a significant number of victims or large-scale property damage, and merit an international response to hold at least the top war criminals accountable under the law.”

The definition is vague and subjective of course, but that is part of its utility, at least as a means of popularizing the core of this emerging legal nexus in the media and popular discourse (a nexus that lacks a single codified body of law itself). A piece of that core is the notion (which as precedent in the Martens Clause of the 1899 Hague Convention) that a measure of what makes certain things unlawful when their technical legality is contested is the extent to which they “shock the collective conscience.”

I think there is significant and mounting evidence of normative opposition to the targeted killings campaign (regardless of arguments some may make about its technical legality under different legal traditions), and according to even the most conservative estimates it meets the other criteria of a significant number victims and large-scale damage. No one can doubt it’s highly orchestrated character.

I wonder if others who generally oppose “targeted killings”** think the concept of “atrocity law” might be a more useful way of framing this problem publicly than talking about “war crimes” or “human rights” specifically – concepts that by their nature draw the listener’s attention to a legal regime that only partially bears on the activity in question and invites contrasting legal views drawn from contrasting legal regimes. Perhaps we can use Scheffer’s concept to combat the “blind men and the elephant” problem with respect to the drone debate. Thoughts?

*As a disclaimer I should say I am less enthused about Scheffer’s more specific criteria for this concept, which in a number of ways don’t mesh well with this general definition and defeat his goal of simplifying by introducing unhelpful redundancies.

**I recognize that not all readers of this post will fall into this category.