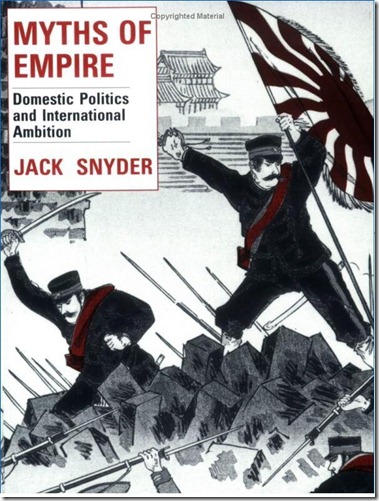 So I am re-reading Snyder’s Myths of Empire for an  R&R. (Btw, not that this is bad book, but is anyone’s reading list in life now primarily driven by anonymous reviewers and the need to get in print for promotion?

The book is theoretically complex (almost too many moving parts to my mind), and the cases are an exciting read. But when it was big in the 90s (when I first read it), no one really thought about China as fitting the argument. But today, it strikes me that China would be an interesting prediction case for the book. Certainly China looks a lot like the kind of expansionist state Snyder describes – rapid late developer, nationalist-militarist elites suspicious that the extant international system is keeping them down, growing factionalization, nationalist mass ideology, etc.
In my grad school classes, one of the big criticisms was that the theory is not very generalizable. By Synder’s own admission in the book, it can’t explain pre-industrial empire (a pretty huge scope condition to my mind); he also has only one non-western case in the book (Japan – the others are Germany, GB, US, and USSR). But China fits a lot of the basics for the applicability of Snyder’s theory – it’s industrial, a great power, growing fast, faces possible encirclement, etc. – so here is a nice example of both theory extension – trying on a new case that ‘should’ fit – and even better, prediction. Prediction is the gold standard of social science, so what would Snyder’s Myths say about China’s future behavior? Can we test the book’s argument against China over the next decade or two?

1. Synder’s Theory (it’s really complicated, so tell me if I am wrong)

Here is the causal chain in the book as best I get it: late modernization/development is state-led and almost always focuses on Lenin’s ‘commanding heights’ industries – coal, steel, oil, heavy manufacture. (Although Snyder doesn’t actually say so, I think both state direction and the focus on heavy industry characterize the late developer, because it needs to emulate quickly under anarchy to avoid military domination by other powers; postwar SK followed this too, btw). Borrowing from Huntington’s military modernizers, only the military usually has the focus and coherence to force this sort of rapid, painful development down the throat of the population. So you get the military and heavy industry collaborating in top-down modernization.

Such military/state-led heavy modernization generates huge conglomerates (zaibatsu, chaebol, Kartell). Because of their sheer size, as well as import for national security, these kereitsu-ized sectors inevitably get close to the state and corrupt its politics with their own selfish rent-seeking behavior. Their preferred protections and assistance often conflict with Snyder’s more liberal-minded ‘labor-export’ coalition. The big industrialists in bed with the state want mercantilism and big-steel military spending. The outcome is a sort of authoritarian corporatism that reminded me of Cumings’ bureaucratic authoritarian industrializing regime. Snyder’s cases for this model are Germany and Japan.

Now it’s true that ‘late, late’ developers (Snyder’s case is the USSR) also pursue state-led heavy manufacture strategies of development, but those states have a ‘unitary executive’ (i.e., a dictator or autonomous state oligarchy) capable of disciplining the militaristic factionalization of the late developers. I think the idea is that very late developers are so far behind, they need a Stalinesque tyrant to whip the masses through history as fast as possible; so development is no longer just state-led, it is the state (but Snyder doesn’t really go into this). And early developers (Snyder’s cases are the US and GB), who are not reacting to anyone else’s previous development, see modernization come much more organically and slowly, resulting in fewer state-incentivized mega-conglomerates. Early developers therefore get a democratic politics more reflective of the general will and less prone to interest group capture by huge corporations, because there are fewer of those corporations and they don’t dominate the commanding heights they way the Kartell do.

So late development produces a politics that is neither democratic (early developers) nor unitary dictatorial (late, late developers), but somewhere in between – with enough democracy to make interest-group politics possible, but not enough to drown them in a huge pool of interest groups broadly reflective of the general will. Snyder calls this interest-group capture argument ‘cartelization,’ by which I understand a highly concentrated, heavy industry interest group pluralism with so few meaningful groups, it’s probably better to call it oligarchy than pluralism. And these oligarchs of authoritarian corporatism are concentrated in sectors most amenable to ‘myths of empire’ – heavy industry and the military.

But this is not enough. These militaristic interest groups realize that the public doesn’t really want to follow them into the risks of expansion, so they roll out an ideology of international persecution, encirclement by others, lack of a place in the sun, etc. None of them really want a war, but their belligerent preferences all added together (logrolling) produce a more virulent xenophobic ideology than anyone had wanted/expected. This talk may be instrumental at first – to justify the continued dominance of politics by the military-heavy industry cartel – but say it long enough, and people will start to believe it. Slowly the elite gets entrapped by its own rhetoric (blowback).

In the end, you get a belligerent militaristic coalition at the top leading a propagandized, nationalistic population below with ever more room for extremists baying for reckless foreign policy. Other countries hear this stuff, and start to freak out and line up against you. Pretty soon all the myths about how the world is keeping you down and encircling you start to look real, even though you had provoked this counter-coalition, and a war to break the ring of steel becomes increasingly likely.

So causal arrow goes: late-development –>; military-led modernization –> heavy industry oligopolization of the economy –> military –> heavy industry cartelized coalition leading the state –> ideological propagandization of the public into extreme nationalism –> spiraling self-inflicted international crises leading to encirclement –>; breakout war to crack the ring –> crushing defeat by a huge counter-coalition. Wow. That’s a lot of steps, hence my earlier point about too many moving parts. But the parallels with Chinese case are enough for an extended validity test.

1. Even though China might look like a late, late developer under a Maoist unitary executive, it isn’t. Mao was not a Stalin-style figure forcing modernization on a recalcitrant population. His economics were far too erratic and confused for that, and sometimes, as in the Cultural Revolution, Mao seemed to want to prevent modernization and perpetuate the chaos of a ‘permanent revolution.’ Instead, its Deng who really ignited Chinese modernization, and he never ruled as the late, late unitary tyrant Snyder foresees disciplining the inevitable interest groups to arise from industrial growth. Instead Deng worked with them as a late developer would, as a coalition broker, and, as Snyder notes with post-Bismarckian Germany, Deng’s successors have had ever more trouble brokering/controlling the factionalization of the center. So I think it is better to call China a late developer in Snyder’s scheme, even if chronologically that’s awkward.

Part 2 will come in four days.