It’s Time to De-Russianize the BRICS 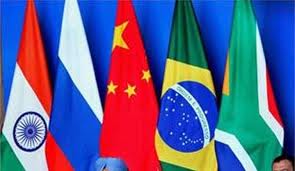 With Putin’s ‘return’ to the presidency, Russia is now officially a joke as a serious great power state. True, Putin has been ridiculous for awhile, what with those shirtless photo-ops that came across like desperate, bizarre geopolitical ‘ads’ that Russia is still a superpower. But this is different. Not even Chinese elites play the sorts of merry-go-round games at the top that Putin has engineered in the last 6 months. To their great credit, Chinese presidents and premiers serve and go. Russia is now the only one of the BRICS in which power does not rotate. Instead, Putin is starting to look like one of those oil-rich Arab dictators who never leaves, continually gimmicking the the ‘institutions’ and ‘constitution’ to justify how, mirabile dictu, he keeps staying in power. In the meantime, the real power structure morphs into an oil-dependent, rent-seeking, cronyistic despotism. And like those Arab dictators, Putin is facing a local resistance that increasingly realizes that Putinism is taking their country nowhere but nest-feathering. To paraphrase Helmut Schmidt, Russia’s pretty much a petro-state with nukes at this point.

I know a lot of people hate the term BRIC or BRICS. It comes off like a pseudotechnical buzzword for investment banker conference calls. It’s the kind of faux-concept CNN reporters use when they go to Davos and desperate undergrads roll out when term papers are due. But I do think it is a useful colloquialism for something Khanna captures well – rising ‘second world’ states whose sheer, and growing, demographic and economic size will inevitably impact global governance. But in contrast Russia isn’t rising from the second to the first world; it’s falling from the first to the second, and further if it’s not careful. This is what the protestors in Russia now, like the Arab Spring protestors before them, intuit – their badly governed states are stagnating in a world of rapid change and falling behind the exciting world of modernity available in the West and sizeable chunks of Asia and Latin America.

So let’s be honest, Russia isn’t a great power anymore. It’s not rising in any meaningful sense of that word in international relations theory. Its population is contracting at a startling rate. The average lifespan is declining. Alcoholism is a uniquely terrible scourge. Infrastructure is a mess. Its bureaucracy has scarcely budged in 20 years. It has basically missed the globalization boat that has linked in the other BRICS to the US and western economies, and that has allowed them to export their way into the middle class. (Russia’s still not in the WTO, and who wants to invest there now?) It suffers from a terrible brain drain. Consider that those ‘mail-order’ Russian brides represent young, healthy, reasonably educated Russians so desperate to flee that they prefer shot-gun marriages to scarcely-known obese foreign guys, over staying in Putin-land. Holding constant the otherwise very disturbing ethical issues, that actually says a lot about the contemporary state of Russia if you think about it, because ‘bride export’ is common trait of third world states.

And the list goes on: After 250 years, Siberia is still an undeveloped backwater. Russia’s budget is extraordinarily dependent on the price of carbon for a second world ‘riser.’ Off the top of my head, I can’t think of one major Russian manufactured export item, other than weapons. (Yes, I am sure I could dig one up, but the fact that nothing immediately, obviously comes to mind is a red-flag itself.) Unlike the other BRICS, its foreign policy obsesses over ephemeral ‘parity’ with the US and realpolitik ‘spheres of influence’, while the wealth-creating, day-to-day reality of the liberal world economy (the WTO, globalization) passes it by. In short, Russia’s a hugely corrupt, dysfunctional, authoritarian, oil rentier-state, just like so many others we know. Now why would that get lumped in with second risers like the other BRICS, Turkey, Indonesia, etc? It’s more reasonable to compare Russia to OPEC states at this point.

Placing Russia in a developmental category with Brazil, India, China, and South Africa does a disservice to the notions of quickening modernity, rapidly expanding GDP based on global integration and law, growing democratization and liberalization, greater responsibility for global governance, and, for lack of a better word, growing ‘normality’ that the other BRICS have striven so hard to achieve. Putin is going the other way; just go read his victory speech with the usual paranoia of foreign influences and all that. That’s exactly the kind of talk that the BRIC moniker implies is being jettisoned for more comfortable cosmopolitan outlook. Even the Chinese, the most politically closed among the other BRICS, don’t talk like that anymore. Brazil, China, India, and South Africa all have rotations of power at the top. All endorse some basic level of friendly interaction with the US, Western, and global governance institutions. All accept the basic structure of the world economy, even if they complain ceaselessly about US leadership. Russia doesn’t make this cut anymore; ten years ago, when Putin seemed to be bring much-needed order, yes. But not now. ‘Presidency-swapping’ is the kind of the thing the Kims of North Korea or the Assads of Syria do, not one of the rising BRICS whose opinions the rest of us should respect.

1. It doesn’t really matter that Russia has nukes. Yes, it looks like it matters. You can always wow people by invoking mushrooms clouds, the scariness of the Cuban Missile Crisis, and your cool submarines and MIRVs. And certainly, with so many other diminishing assets, Russia will waive the nuclear stick to get attention. But what exactly do nukes get Russia now, after the Cold War? Prestige? De Gaulle famously called nukes a short-cut to great-powerdom. Ok, but that is a ‘psychic’ benefit – that little tingle you get from saying ‘Russia is bada–!’ What else do nukes get Russia?

2. Russia’s size doesn’t matter – although it might if Russia could ever get its act together. Yes, Russia is really big and covers 11 time-zones, but again, what real tangible benefit does that capture for it? Siberia’s endemic backwardness is the obvious marker. Despite almost 3 centuries of control, no planner in Moscow has yet figured out how to sustainably access that potential. Anyone who’s anyone still lives in Moscow or St. Petersberg.

3. The UN Security Council veto, from its status as one of the permanent five (P-5) members, is a Soviet legacy prestige asset, not a real institutional one. Yes, the Russians can block R2P stuff at the UN for a little while. But that doesn’t really slow down the West (or China) too much if an issue is genuinely important to them. There is no way the other P-5s would give Russia real veto power like that. Bosnia, Kosovo, and Libya showed that. Even on Syria, Obama has begun entertaining military options, regardless of what Putin thinks.

The only way out of this is for Russia to modernize its bureaucracy and open its economy to foreigners. The first is necessary so that people can trust the law and so feel safe investing and otherwise generating wealth locally. That is, if Russians feel like they’ll keep the fruits of their labor instead of seeing it ripped off by corrupt officials, they’ll start working harder and Russia will see real GDP growth outside of the resource sector. Second, as the other BRICS have shown, this process goes so much faster if foreigners are allowed in.

Remember that this is the stuff Medvedev said he would do and didn’t. Does anyone really believe Putin will, at this point? That answer’s itself, so good luck to the protestors.