Political scientists like fantasy role-playing games. But this does not mean they are simple nerds. They like a particularly elegant and sophisticated escapism called game theory. While it might seem obscure and overly complicated at first, you can grasp game theory and impress your political scientist friends with a very simple insight — game theory is just like Dungeons & Dragons.

Like Dungeons & Dragons, game theory players embark upon imaginary adventures in which they interact with others in situations never before seen in the real world. The game theorist operates as the dungeon master, setting up a stylized environment in which players cooperate and compete over some prize such as being elected, winning a missile crisis, or maintaining a fixed exchange rate system. He, always he, sets up the game tree or matrix that describes the actions that are possible at different moments in the adventure or campaign and gives them their powers like the ability to veto or escalate. The outcomes are based on probabilities, although game theorists do not use dodecahedron dice. And like Dungeons & Dragons, the outcome is of no consequence for understanding the actual world around us.

Game theorists believe that active use of imagination clarifies complex situations and concepts. They point out that simple games like Chicken, the Prisoner’s Dilemma or the Battle of the Sexes are apt metaphors that help us understand any number of strategic interactions in the real world. It is unclear how game theorists came about the inspiration for those games, as no game theorist has ever talked to a girl, much less been forced to choose between a romantic beach or mountain holiday. Their interactions with the opposite sex generally revolve around Japanese anime. And they aren’t exactly James Dean or hardened felons either. 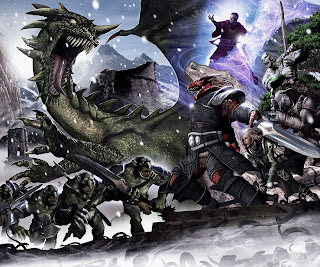 Bargaining must have broken down due to incentives to dissemble. Dragons do indeed have a hard time making credible commitments as they make the offense dominant.

Game theory is sometimes called formal modeling, which is an unfortunate term, as no game theorist has ever worn a tuxedo, ever. They are generally pleased to find some sweatpants at the bottom of the laundry basket without a stain. And game theorists avoid having their picture taken when possible because… well, there is the sweatpants, for one.

It is not known whether a successful career in game theory is correlated with prior experience as a dungeon master although there are clear signs that this might be the case. Game theorists and D&D players both spend considerable time in windowless rooms. And both try to avoid any contact with genuine empirical data, whether it be books or the reality that there are no sexy witches in the real world.

However, there are clear differences as well. Game theorists make considerable sums of money while most D&D players, even adult ones, still live in their parents’ basement. And game theorists have clearly lost all sense of mystery. Their players are all colorless automotons who cannot talk to each without fearing that the other is lying, much less fly. They are, however, remarkably capable of making precise estimates of probability which is kind of like magic.

It is possible that game theorists are fantasy enthusiasts who no longer possess an inner child’s sense of wonder. This is perhaps due to the crushing experience of interacting with other game theorists on a regular basis.Contrary to longstanding rumors, however, game theorists are not Satanists. It is all just good clean fun. Indeed their preferred environment, a godless dystopia of egoistic utility maximizers, suggests that they are much more likely to be atheists. It is also not possible to harm a game theorist with silver, although they do suffer great pain when their on-line access to the American Political Science Review is cut off.