Why don’t Korea and Japan Align, even though IR says they should? 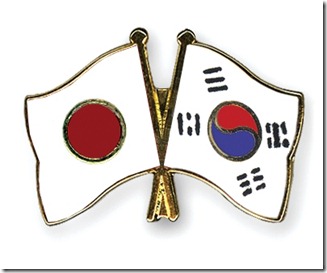 For awhile I was collecting links and such to make an argument about Korea and Japan working together on big issues like China and NK, or finally clinching the much-discussed but little worked-on FTA. Both the realist and the liberal in me wanted to see two liberal democracies working together in a tough environment with similar structural threats. Initially I had written: “This may be the biggest news of the year if it actualizes: Japan is apparently considering real defense cooperation with SK. If you follow East Asian security, this is a revolution. Try here, here and here.” But this is sorta cheating on social science, right? Looking around for any scrap of data to support an outcome we like, even though it isn’t really happening?

Well, I give up. Instead of more normative, but ultimately speculative, essays on why East Asian states should align, found an Asian Union or Community, build a local alternate to the IMF, forge a common currency, take ASEM seriously, etc., I think we should start asking why Asian states cooperate so badly. (My short answer: they’re too nationalist.)

My students bring integration up all the time. Until the euro crisis got really bad, students used to tell me all the time that Asia needs an EU or coordination against the (much-loathed) IMF. And I’ve read lots of term-papers on this. But the more I look at the most important Asian IO, ASEAN, the more it just doesn’t impress me no matter how much hype it gets (which is a lot out here at the conferences and in business advertising in the media). ASEAN is around 60% of the age of the EU and has done maybe 20% of the integration/cooperation the EU has. I argued in ISR a few years ago that lots of IOs aren’t actually about integration at all, but rather the joint self-defense of weak and/or authoritarian elites (OAU, GCC, SCO). But that still doesn’t explain why Korea and Japan are so distant. And now for an r&r, I’m revisiting Walt’s Origins of Alliances. Balance of threat feels pretty persuasive too, but I think it would struggle with the Korea-Japan case, as would the democratic peace.

So if I had the time, I would write this up as a real journal submission. This case creates trouble for both standard realist and liberal arguments that have underlain my own personal (as well as USPACOM’s) enthusiasm for this alliance-that-refuses-to-be for awhile. I flagged this earlier as a good non-western puzzle for IR that doesn’t really get the attention it deserves, because we don’t know Asian cases very well (Kang is very important on this, IMO). Walt and Doyle tell me this alliance should happen, but Koreans stubbornly refuse to do what social science tells them to. (Cue your orwellian fantasy of intellectuals with their hands on the whip at last to force the world to fit theory.) When I mention idea this at conferences or to my students, I get lots of blasé disinterest.
In short, all three big paradigms of IR broadly seem to suggest that Korea and Japan should be much closer than they are. But Korea just won’t do it, and my sense is the Japanese don’t really want to either. Here’s the basic theoretical run down as I see it:

1. Realism: Korea and Japan face a very similar structural environment. They are geographically in basically the same place facing the same regional security complex. So if states balance power (Waltz), wouldn’t Japan and Korea be cooperating to hedge China, and mildly cooperating to more balance NK? If states balance threats, especially proximate ones with offensive power (Walt), shouldn’t Korea and Japan be pretty publicly aligning against freaky, unpredictable NK, and mildly cooperating to hedge China? But they really aren’t doing any of those things. Sure, they’re on the same side of the table in the NK talks, but there’s no real coordination. Diplomatically, Korea can barely talk to Japan, and Koreans can be downright japanophic if you get them going on Japan’s colonial history here. The Liancourt Rocks and the history issues constantly interrupt. As everyone knows, the US relationship with them is ‘hub-and-spoke’ bilateral rather than NATO-style multilateral. The US would love for them to cooperate, but they don’t. It’s more like Schweller’s ‘underbalancing’ than Walt’s balance of threat, even though Walt should fit here pretty well, no?

2. Liberalism: Shouldn’t two liberal democracies be friends, if not allies? The democratic peace, security community, and other liberal theory broadly tells me that Korea and Japan should be closer than they are. I guess one could say that the democratic peace explains why they don’t fight even though they don’t like each other much. That might actually be a pretty good finding: two otherwise hostile states are able to channel their disputes through conflict-dampening democratic transgovernmentalism. (But even that might be spurious, as one argue that it is the mutual US senior alliance partner that tamps down the conflict, as many would argue is the case between Greece and Turkey too.)

But the more norm-based, neocon, or ‘strong’ versions of the democratic peace anticipate a sense of ‘we-ness’ or community among democracies, like in NATO, or less so, the OAS. A few years ago, there was talk about formalizing a ‘community of democracies’ as sorta like a global NATO of liberal states. But I don’t see this here at all. When we think about the US-Canada relationship or EU relations, we see a reasonable amount of warmth that suggests that ‘we-ness,’ shared concern for the other’s well-being, and an unwillingness to exploit the other. I don’t see here. Korea and Japan are more like ‘frenemies’ than liberals in solidarity. Liberalism and democracy – and all the conflict-reducing things that are supposed to flow from that, like student exchanges, tourism, mutual language learning, lots of Track II interchange – don’t seem to be working. Germany and France managed to do this stuff and build a real alliance, as did the EU generally. But Korea and Japan are more like Greece and Turkey.

3. Constructivism/Culture: Shouldn’t culturally similar states find it easier to cooperate, like the US and Canada? In EJIR, I argued that Confucianism played a role in keeping an east Asian peace before the Opium War. The more time I spend in Asia, the more I think Korea, Japan, and China are more culturally similar than they want to admit. (My students bristle at that one a lot.) And if you look at Korea and Japan, they do in fact share a slew of cultural characteristics from the mundane – eating lots of fish with chopsticks – to the profound – long histories of Confucianism, Buddhism, shamanism, monarchy, social hierarchy, ancestor veneration, etc. (NB: This is one of the reasons why Huntington’s clash of civilizations didn’t go down too well in East Asia. Because he couldn’t very well lump China and Japan together for political reasons, Huntington was forced to parse out Japan as radically different based on Shintoism. This wasn’t really convincing.) Brian Myers argues that this cultural similarity is one the reasons why Japan was able to absorb Korea without too much difficulty.

But this doesn’t seem work either. (So maybe Huntington was right after all?) I find Korean students intensely dislike being compared to Japan and hammer away what Freud would almost certainly call the “narcissism of small differences.” If you didn’t know the differences between kiminos and hanboks, just about everyone here is excited to tell you in great detail.

In short, two states that share a lot of cultural characteristics, structural-geographic conditions, threat perceptions, and domestic institutions and values can’t ally and can barely talk to each other. To give a western example, imagine Canada saying the US was a greater threat to it than the USSR. As a rule, I find Koreans worry far more about Japan than China, or even NK (yes, that’s not an exaggeration outside of the foreign policy set), and there is a far amount of paranoia about Japan lurking beneath the surface. I know Japan less well, but Japanese colleagues I know from conferences tell me similar stories about how many Japanese look down on Koreans and secretly think Japanese empire was good for Korea, because it brought modernity.

So what would be a theoretically progressive way to explain this tough case? The actual empirical issues of territory and history that keep them divided are well-known, but it is important to not just tack them on as a transparent ad hocery, like ‘balance of threat only works when partners haven’t conquered each other in the last 50 years.’ I find this a tough one.

So if you’re a grad student, here’s a paper idea.