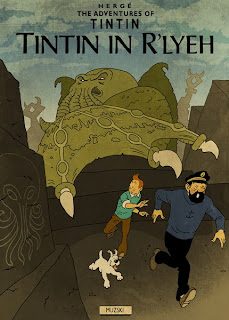 Some years ago I finally got around to reading Goodrick-Clarke’s The Occult Roots of Nazism: Secret Aryan Cults and their Influence on Nazi Ideology. Reading Goodrick-Clarke’s description of various forms of  esotericism and mysticism in the late eighteenth and early nineteenth centuries, and specifically Blavatsky’s Theosophy movement, drove home the degree to which H.P. Lovecraft‘s writings — and, by extension, basically all modern horror — are a product of that milieu. Indeed, it isn’t much of a surprise that horror, fantasy, and science-fiction writers (and not a few conspiracy theorists) have been mashing up Lovecraft and Nazis for decades.

But what really struck me is the degree to which Lovecraft’s mythos amounts to an inversion of theosophic doctrines and those of cognate intellectual currents. After all, such movements promise that decoding esoteric knowledge will lead humanity to a central, enlightened, and powerful place in the universe. In Lovecraftian writings, doing so reveals the insignificance of mankind and generally results in insanity, death, and other bad stuff. So Lovecraft provides a critical reading, of sorts, of these ideas; one with a rather ironic “reveal”: the mystical energy beings coming through that portal you invoked are going to eat your brains.
Daniel Harms has a nice essay on this subject.
No good reason for this post. I’ve been playing Elder Sign on the iPad and reading Charlie Stross’s Laundry books, so I’m in a Lovecraft frame of mind.
Speaking of Stross, he recently posted an essay on the death of SF as a genre. I think he’s got it backward — genre will become more important in a world of rapidly expanding reading options, information overload, and targeted marketing. But he’s right that the intertext of SF is likely to change… but he’s also overestimating the degree to which most consumers of the genre partake in that intertext.
Image from.