This was the tone of an op-ed I pitched regarding the Rio+20 environmental summit. Below the fold, I offer a slightly more nuanced argument …

Rio+20, the twentieth anniversary of the 1992 Earth Summit, kicks off the formal part of the negotiations tomorrow as leaders of 130 countries arrive to take part. It strikes me as a misguided nostalgia tour and will probably achieve even less than the tenth anniversary that took place in South Africa. Environmental indicators continue to deteriorate but sending 50,000 people to Rio (40,000 of them environmentalists) is a waste of time and energy (literally as Joe Biden would say).

How the times have changed. In 1992, President George H.W. Bush, facing a tough reelection, made an appearance in Rio to shore up his green credentials. This time, President Obama won’t be going. Nor should he. Not much will happen there. We a new approach to conserve the resources of the planet both at home and abroad.
Here at home we need to convince Republicans that environmental protection is a conservative value. Internationally, we need to persuade countries in Asia that is in their interest to pollute less and be more efficient in their use of energy. Environmental protection will save lives and money.
Why am I so pessimistic? As I’ve argued elsewhere, mega-conferences do not appear to be great venues for collective problem-solving. In common vernacular, it akin to too many cooks in the kitchen. In political science speak, it’s too many actors with too diverse preferences shackled by consensus-based rules. As David Bosco argues on The Multilateralist:

But the low expectations also reflect a broader dynamic: what might be called “big-bang multilateralism”–in which the world’s nearly 200 sovereign states attempt to hammer out complex agreements–is mired in a losing streak.

Pessimism
Pessimists of Rio+20 are focusing on the lack of agreement on a negotiating text, with developing countries fighting a losing battle for more pledges of assistance at a time when the entire European project is under threat. That negotiating text, which will be a non-binding agreement in any case, covers a raft of issues, including whether a “green economy,” whatever that is should serve as the roadmap for the future. Perhaps the most problematic issue is that developed and developing countries do not see eye to eye about what kind of meeting this is. Developed countries want this to be an environmental meeting, but developing countries want to focus on issues related to poverty. As Todd Stern, the U.S. climate negotiator and leader of the U.S. delegation to Rio, said: 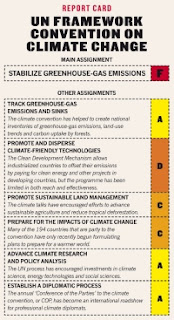 Among the contentious issues is the fate of the United Nations Environment Programme, based in Nairobi. It is a low stature organization within the UN system, and advocates from France in particular are seeking to elevate its status from program to a specialized agency, more like the World Health Organization. The idea would be to make UNEP more politically and financially independent. Given the WHO’s current budgetary woes, it is highly problematic as a model. Moreover, as Adil Najam argued in Global Governance a decade ago, in the absence of political agreement on the environment, the organizational status of UNEP is akin to “merely rearranging the organization of chairs on our planetary Titanic.”
Nature issued a pre-Rio report card on how the world has fared on three core environmental problems, climate change, biodiversity, and desertification. The results are dispiriting, an F for stabilizing greenhouse gas emissions, an F for reducing biodiversity loss, and an F for reversing desertification and land degradation.

While CFR’s Stewart Patrick agrees that the era of “grand multilateral treaty-making is over,” he is more sanguine the Rio may exceed expectations. A number of analysts have suggested that a novel feature of the meeting, of states and other actors registering a “cloud” of commitments, may in time yield significant results. As Patrick concludes:

If this seems a depressing scene-setter, the Rio summit is not fated for failure. It may yet exceed expectations with a low-key approach focused less on the painstaking negotiation of treaties than on generating practical national commitments to advance sustainable development.

Echoing these sentiments was the late Nobel laureate Elinor Ostrum who in a final op-ed before her death praised the actions of cities and other actors to build sustainability from the ground up: “we are seeing a heterogeneous collection of cities interacting in a way that could have far-reaching influence on how Earth’s entire life-support system evolves.” I tend to agree with Thomas Lovejoy that these patchwork of commitments may not be nearly enough: “The best one can hope for is a sort of mosaic approach, which by definition won’t be sufficient.”
I think thematic meetings, organized around non-binding commitments on a particular issue, are likely to be more successful than catch-all meetings like this one.
Despite my pessimism, if nothing else, Rio+20 may have at least one positive benefit. With world media focused on the host country, on May 25th Brazil’s President Dilma Rousseff vetoed key clauses of a land law that would have opened up the Amazon to deforestation.
The Road Ahead
Looking ahead, the environmental community needs to rethink how to approach these issues. In the United States, the challenge is clearly about making the environment a bipartisan issue again. Democrats own the issue and that is bad for the environment.
Internationally, advocates for environmental protection need to be more creative. David Victor and Leslie Coben wrote a piece some years ago that suggested there was a herd mentality among environmentalists who tended to embrace legally binding international commitments as the only way forward. While that has started to change, faith in piecemeal bottoms-up efforts seems to me like small ball. In between are more ambitious efforts like what Simon Zadek proposed — green unilateralism by the major actors.

Rather than seeking to contain this unilateralism, world leaders should leverage it in pursuit of global public goods. Such a strategy’s success depends on three factors: a focus on a small number of big-ticket national and regional actions, adequate policy leverage over these actions, and international coalitions to steer them along a legitimate path.

This is an agenda I can finally get excited about.