“Against Dogmatic Bourgeois Flunkeyism,” or what I learned in NK (1)

In August, I visited North Korea for the first time. It was the most unique travelling experience I’ve ever had. I’d certainly recommend it to political scientists and Asia experts, but it wasn’t anything close to a ‘vacation’ or break or anything like that. (Yes, some of the sites marketing tours of NK actually call it that.)

At a bookstore devoted to the works of Kim Il Sung and Kim Jong Il, I stumbled across an essay, from the latter if I remember correctly, about social scientists’ commitment to the revolution and juche. It included the title line – that we must avoid ‘flunkeyism’ toward ‘bourgeois’ forms. We are supposed to contribute to revolution, not critique too much, and not ‘ape’ western ideas.

(I love that sort of over-the-top Marxist writing – I remember the first time I read Maoists decrying ‘capitalist roaders’ and their ‘imperialist running dogs.’ I couldn’t even figure out wth that meant until I got to college. Who doesn’t miss the Cold War? But wait – perhaps Kim Jong Il is wired into the ‘poverty of social science theory’ debate and knows about the flunkeyism endemic to grad school?! A-hah! He knows! He is the great leader! He sees all!)

So here some thoughts that presumably demonstrate my flunkeyist failings:

There is an endless debate over the ‘real’ nature of NK – is it a gangster state? A neo-Confucian kingdom? A typical stalinist half of a country divided by the Cold War? Semi-fascist? Presumably the answer is some mix of all that, but what really struck me in-country was the personality cult. Back in April Kim Jong Un referred to NK as “Kim Il Sung nation,” and that is certainly what they showed us. The Kims, especially KIS, were all over the place – statues, placards, and their names on one institution after another.
One defining moment came as I was catching up to our guide, and I walked past a large stadium in Pyongyang. Forgetting where I was for a moment, I asked what it was called, only to be told it was Kim Il Sung Stadium. By this time, after a week in-country, one of my friends in the group looked at me like I had a hole in my head. Of course, it’s KIS stadium – my juche spirit was flagging momentarily.

So if had to answer the ‘what is NK really’ question, I would say a royalist, absolutist cult. It felt like France before the revolution, when whether or not Louis XIV clipped his fingernails that morning was a more important political moment than whether or not peasants were starving somewhere. From all the statues and placards, as well as the relentless Kim-focused presentations by all of our guides – without exception – the dominant ideology was the personal awesomeness and perfection of the two preceding Kims. KIS as something like Jesus Christ seemed far more important that Marxism, juche, and the rest of it. 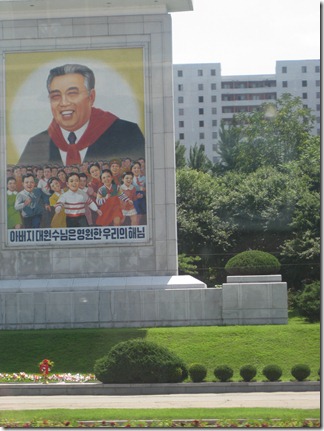 Two examples really stick out. At a bowling alley, the ball and pins which KIS bowled on the facility’s opening were kept under glass at the entrance, surrounded by flowers, with photos and a dedicatory statement from KIS inscribed on the wall. At a museum dedicated to the construction of the Pyongyang metro, the entire presentation was focused on KIS’ on-the-spot guidance of the construction, not the metro itself.

The museum should have been called the “KIS Visits the Metro” museum. A steel cup from which KIS had drunk while visiting the construction had been retained under glass (insert juche holy grail reference here), as well as the subway seat on which he sat on its opening (it had been cut out of the car to seal under glass). Huge pictures throughout showed KIS smiling and pointing, and the guide made a point to tell us how the subway ran better because of his guidance. That guidance included installing ventilation and flood control, because I guess NK engineers thought a flooded, unventilated subway system would be a great success. Good thing KIS was around to point out such subtle improvements. After seeing so many places where the Kims sat or stood or pointed, I asked semi-seriously if we would eventually visit the KIS bench museum.

I could go on like this for pages, but in short, wherever possible, the magnificence of the Kims, especially KIS, was emphasized. Busts, statues, murals, and slogans were everywhere. “Long live the great Korean leader comrade KIS!” was the standard.

All this was far more emphasized than ideology, the revolution, juche, Marxism, the party, songun, even unification. At the Juche tower, several dedicatory plaques just gave up and referred to “Kim Il Sungism,” which dispensing of the fatiguing ideological posturing I found strangely refreshing. At the Juche section of the ‘Three Revolutions Museum,” we learned that Kim Il Sung wrote 18,300 books (that figure is even inscribed on the wall in a huge plaque).

What can you even say at this point? To me it all looked a lot like evangelical Christianity’s intense focus on the person of Jesus, except in the language of a political-stalinist personality cult. A good book on religion in Korea even makes this argument about the North. Deification doesn’t strike me as particularly Confucian, Korean, or Marxist. KIS’s mother was a Christian, so perhaps that is where it came from.