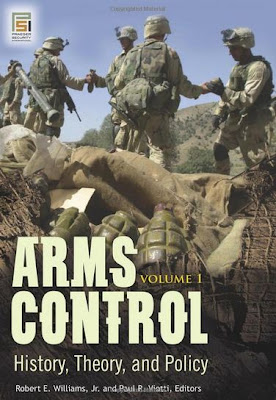 Praeger has published a new two-volume compendium on arms control edited by Robert Williams Jr. and Paul R.Viotti. If you’re writing anything on the subject of arms, weapons advocacy or national security governance Volume 1, at least, is a pretty helpful resource – especially if you have research money to cover the hefty price tag.

The book begins with some theory, history and definitions; some philosophical views and a section on “Arms Control and the Social Sciences” which includes chapters on human security as a paradigm, conflict resolution as an emerging discipline, and agent-based modeling. There’s a section on NGO advocacy and some historical case studies of specific regimes – though this section misses important ones like the blinding lasers ban and bio-weapons, contains no generic historical overview in which to situate the case studies, and ignores non-regimes entirely.

Like many edited volumes, some of the chapters are very good, others more superficial. One of particular note is Jeffrey Knopf‘s analysis of “NGOs, Social Movements and and Arms Control.” This is less of an arms control paper than a piece on transnational networks using the arms control issue area as a focal point to develop a very useful typology of advocacy structures and tactics, so it has general theoretical utility to NGO network-types those working in other issue areas as well. The chapters on specific NGO campaigns like clusters and landmines are written by scholar-practitioners who participated in the campaigns, like Bonnie Docherty who combines a career teaching law at Harvard with research for Human Rights Watch and knows of what she speaks; and Kenneth Rutherford, a landmine survivor and advocate who now teaches at University of Missouri.

I also appreciated Pauletta Otis‘ contribution on “Anthropologists and Arms Control.” Studies of epistemic communities in the arms area have tended to focus on the contributions of hard sciences. Yet as MJ Peterson‘s recent work on indigenous rights and the brouha over DOD’s Human Terrain System suggest, the relationship between anthropology and global normative currents bears further investigation, even in “hard” security studies. And unlike the other chapters that fall under the subsection “Arms Control and the Social Sciences,” Otis writes not simply about what anthropologists have to say about arms control but the extent to which they are players in the politics of it all. While the chapter is little more than a sketch of a research agenda on this topic, that’s ok if it sparks off some genuine studies placed in journals where people will read them.

Now for some criticism.
Volume 2 is egregiously – unforgivably – dominated by nuclear arms control. Not to belittle the significance of governance in the nuclear realm, but ten chapters on nuclear weapons should have been a separate project since the audience for this compendium is not nuclear security specialists per se but generalists looking for a broad overview of “arms control.” So a single chapter on nukes in Volume 1 would have more than sufficed and should have been balanced out with single chapters on other important arms control regimes. If Volume 2 was necessary at all, it should have included a broader range of case studies. Probably it wasn’t.

Part of this is about framing. Let’s assume a separate volume divided between “Weapons of Mass Destruction” case studies and “Advanced Technologies” case studies added enough value to justify itself on top of the already fat-enough Volume 1. To title Volume 2 Part 1 “Weapons of Mass Destruction” and then focus solely on nuclear security rather than analyzing the strengths and weakness of the chemical and biological weapons regimes distorts the readers’ understanding of what WMD includes. And this exclusive focus on the nuclear obscures what seems meant to be a wide-ranging discussion of arms control generally: nuclear arms control is a very specific creature within this wider area of governance, and Volume 2 does nothing but distort that agenda (and significantly increase the price tag of the project to readers).

But it’s also about opportunity costs. The ten chapters on nuclear weapons in the “WMD” part of Volume 2 leaves almost no room for what should have been the most exciting part of the project of all: Volume 2 Part II “Advanced Technologies.” If you wanted to really delve here, you’d have some thematic chapters on the applicability of war law to emerging technologies, or the politics of emerging technologies; if you wanted to minimally cover this now-burgeoning field you’d include a range of chapters on autonomous weapons, synthetic biology, non-lethals, nano-weapons, etc. Instead we get a chapter on outer space and a chapter on cyber-conflict – about each of whose significance there are important points of debate at present.

The moral of the story: book editors, learn how to reject manuscripts.  Book publishers: less is more; cheaper is more salient.