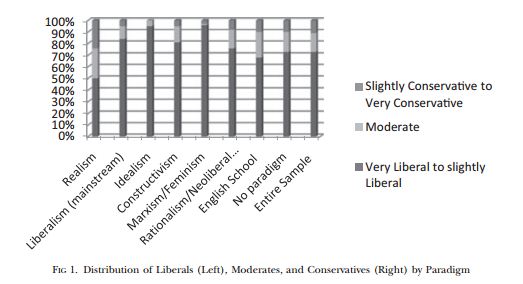 Are international relations scholars objective observers of political events, or do our political preferences influence the way in which we see the world? This article explores that question using data from a survey of international relations scholars. It develops and tests hypotheses about how we might expect adherents of particular paradigms to identify themselves politically on a left-right scale based on the resonance between the content of ideology and the key propositions of different schools of thought in IR. Although they are relatively centrist, I find that realists are the most conservative and right-leaning of international relations scholars, while Liberals are more liberal and left-leaning. Although neither approach has any intrinsic ontological content, rationalism and constructivism also have a distinct ideological profile, the former being more conservative than the latter. Post-positivist epistemological commitments are associated with the political left. More importantly, there is an interaction between ontology and epistemology. Positivism plays a role in breaking the link between political values and paradigm choice. Non-positivists demonstrate the strongest connection between ideology and international relations approach. I consider the implications of these findings for the use of paradigms in international relations theorizing, arguing that they should make us more circumspect about the use of paradigms in our discipline.