5 Fox News Myths about the Fiscal Cliff – and no more ‘Cliff’ Metaphors either… please! stop! 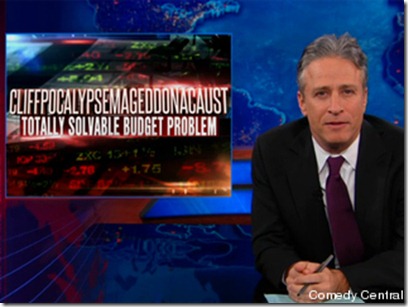 Does anyone else find Fox News strangely appealing to watch? For some reason I watch it all the time. As ideology that is inadvertently entertaining, interwoven with a veneer of ‘news,’ it’s a freaky, terrifying wonder to behold. It is vastly more interesting – maybe because it’s akin to experiencing an alternate reality –  than it’s-so-bland-what’s-the-point-anymore CNN. Watching Fox is like watching yourself become dumber, all while being shamelessly entertained by gorgeous teleprompter-readers and militant American nationalism. It’s like the news + ‘Call of Duty’ + ‘Baywatch.’

As a news station it is, of course, preposterous. Its presentations are astonishingly partisan. Even after 15 years, I am amazed at what Hannity, O’Reilly, etc. can get away with (try here or here in just the last few weeks). It does very little investigative/reportorial work itself. It generally repackages what other outlets have produced, or presents lengthy ‘Crossfire’-style opinionating, which is not really journalism. And it’s Michael Bay-style presentations, particularly its graphics and swooping necklines, make the news look like an action movie, not like, you know, the news.

On the other hand, it does provide a lot of ‘meta’ information about American (really Southern) conservatives if you take a step back. That in itself is useful, as you can see where some of the most toxic ideas in our politics, like death panels or Obama the Muslim, come from. For example, I had no idea just how outlandish the conspiracy theories on the right could become until I heard people like Glenn Beck and Laura Ingraham on Fox. I hear this stuff is pretty common on AM radio, but who listens to that? But as a major TV station, Fox has opened the right-wing bubble to the rest of us, and sociology of that hothouse, where global warming is myth and the UN is taking over America, is both hugely interesting and frightening at the same time.

Or consider the blatantly obvious sexism and lookism of the presentation of the female reporters. You think the excellent Candy Crowley would get a gig on Fox? The tight, revealing clothes, heavy make-up, and high heels tell you a lot about the rather reactionary sexual values of the network and its viewers. First, the female reporters better be good-looking – no, hot – ideally blonde and leggy. But they should be mothers too, because we’re a Christian network. And they better be hawkish too, because America kicks a–. Outcome? Bottle blondes in leather pants and boots demanding that Muslims be tortured. If that sounds similar to the Sarah Palin ‘hot, jingoistic mom’ formula, that’s no accident. Here’s Brit Hume saying he hired Megan Kelly, because she was ‘strikingly attractive,’ ‘believed there was a left bias in the news,’ and has a ‘tremendous air presence’ – i.e., she’s so good-looking that viewers won’t turn the channel even when she has a prototypical, Fox News anchor right-wing freak-out over stuff the rest of us have never even heard of.

So as you can see, I’ve been watching far too much Fox for my mental health, and I’ve picked up a number of its fairly bogus tropes on the the fiscal cliff which I thought I’d share:

1. The stimulus had no effect.

This is a Fox chestnut, even though the counterfactual strongly suggests otherwise. Apparently it just created more debt and was wasted on Democratic voting blocs like teachers unions. That is almost certainly not correct. The stimulus almost certainly turned a second Great Depression into ‘just’ a Great Recession. It’s also worth noting that when government spending that Fox likes, like defense, comes up, suddenly sequestration will kill creativity and damage communities around America. So I guess ‘military Keynesianism’ is ok while more traditional ‘infrastructural Keynesianism’ is socialism. Despite America’s huge infrastructure needs, I guess it’s better to let the wealthy de-link than to take advantage of record low interest rates to invest in such public goods. Come on…

2. The government needs to balance its books just like an American family around the kitchen table.

Another Fox stand-by in place of actually inviting an economist on the shows to speak. This is a basic rejection of the Keynesian role of government established over the last century of economic practice, repackaged as a ‘folksy’ everyday analogy to ‘hard-working Americans.’ It’s also total bunk. It’s worth nothing that Bush 2 made no such effort to balance the books, and in late 2008, signed off on the first wave of bail-outs and stimulus. Yes, this adage sounds right if you’ve never taken economics, but this is one of the first myths you learn is wrong when you do take macroeconomics. Government can provide demand, which in turn drives supply, which in turn drives employment. Yes, it can be wasteful, but when everyone else is deleveraging (i.e., saving and not spending), you probably want the government to step in and provide some demand. Otherwise the paradox of thrift begins to lock-in, and growth stalls as everyone saves, and then keeps saving as recession worsens. As Krugman has noted (how many times now in the last 5 years?), the time for government retrenchment is during the boom, not the bust.

3. Inflation and higher interest rates are just around the corner.

A nice extra Fox likes to add is that this will hit seniors living on fixed incomes very hard. Nothing like scaring the viewership into repeat viewing! Blame Ron Paul perhaps for this, but as Krugman has argued for years in his column, ‘inflation’ has become the major GOP tactic to block stimulus spending. The problem with this of course is that US inflation has been around 2% for years, and US interest rates are astonishingly low, around 1.4% for a 10-year T-bill. If anything, the economy probably needs inflation at the moment to encourage people to get out and spend. Fox, the WSJ, and Romney have all invoked Japan and Greece as analogies, but it’s relentless austerity and deflation that have made those crises so much worse, or least haven’t turned them around. I don’t want inflation either, but letting the money supply grow for a few years could hardly be worse than what we have now in the OECD. It’s worth noting that this is what both Shinzo Abe and Bernanke are proposing.

4. Obama has created massive uncertainty, so no one wants to invest and that creates unemployment.

This is more bunk, and totally unsubstantiated by any general data. The usual Fox-CNBC-Bloomberg tactic is to bring in some corporate executives, like Jack Welch or Donald Trump, who already dislike Obama because he wants to raise taxes on the wealthy, and let them spout off about their ‘sense’ that Obama is killing investment. This is what Krugman calls the ‘confidence fairy’: if business leaders just had confidence that Obama wasn’t a tax-raising socialist, they would invest and expand their businesses. The implication is that the demand for their products is waiting out there, but they are foregoing investing and making even more money, because they distrust Obama’s regulatory environment.

Does that sound credible at all? That the White House killed the ‘animal spirits’ of US business when tax rates, especially capital gains, are at historic lows? That executives would forgo making money because of the wildly overblown ‘risk’ posed by ‘Obama socialism’? Come on. Here’s Buffett’s useful takedown of this preposterous notion. And of course, no meaningful survey data of executive attitudes has ever been presented on any of the business network shows that I have seen when this line is repeated. It’s usually just Welch complaining or something. On the other hand, there is a lot of evidence that there is a huge savings glut in the world and significantly lower demand.

5. Tax cuts forever! or tax cuts will pay for themselves, or we’re still on the high-end of the Laffer Curve.

Unlike the left, I actually think the Laffer Curve is a good model. It seems indisputable to me that a tax rate of 100% would generate zero government revenue. Why work if the government will take it all? Similarly, one can imagine low government revenue when the effective tax rate is still very high, around 90%, or 80%. On the high end of the curve, it makes sense to reduce rates to incentivize work, which in turn would boost the tax take. So at the high end of the curve, I don’t think the idea is ‘voodoo economics,’ as Bush 1 once called it.

I think the real question is where the inflection point on the Laffer Curve is. The GOP obsession with tax cuts suggests that the curve bends downward only very close to zero (although in this graphic, pulled from Laffer himself here, seems to suggest it’s somewhere around a 50% tax rate). The average US federal tax rate is below 20% right now though. If one includes state and local, the average American pays probably 25% of her income in taxes. That is really, really low. The reality of course is that the last big round of tax cuts (Bush’s of 2001 and 2003) created a gaping deficit, which suggests the inflection point is higher than 20-25%. Conversely, the top marginal tax bracket of the Bush 1 and Clinton years was 39.6%, and there was very good growth in the 1990s which generated a surplus. That suggests the inflection point may be over 40%. Wherever it might be, the causal relationship is way more tangly than just: tax cuts –> growth explosion.

In short, we are almost certainly well past the inflection point where further tax cuts would be revenue neutral or better. At this point, it should be pretty obvious that more tax cuts would mean less government money and vice versa. And certainly cutting taxes while increasing spending on wars and Medicare (part D), as Bush did, flies right in the face of this blindingly obvious non-insight. This doesn’t necessarily mean that raising taxes is a good idea, just that the Fox-Romney-Ryan idea that a massive tax cut could be kept revenue neutral through ‘dynamic scoring’ is almost certainly incorrect given what the government is spending. Yes, ceteris paribus, lower taxes are good, but that’s a non-insight too, because government needs varying wildly depending on circumstance. It’s not 1981 anymore; there are no more big ‘unleasings’ of the private sector to be captured on the bottom end of the Laffer Curve. We’re already there.

Finally, I can’t help but add how awful the ‘fiscal cliff’ metaphor has become – we are ‘falling off’ the cliff, ‘going over’ the cliff, ‘climbing’ the cliff… Enough! Stop! The wild overexposure of this metaphor perfectly fits the worst news-as-hyperbole manner of Fox and others. ‘Cliff’ imagery feeds exactly the kind of sensationalist cable news feeding frenzy the policy process does not need, but the networks love. All kinds of talking heads can bemoan the oncoming ‘apocalypse’ and sound insightful while throwing around non-starter banalities about how ‘Washington is broken’ or ‘the system doesn’t work’ or ‘we need leadership.’ And I’m just about positive that we’ll soon see budget ‘countdown clocks’ on all the cable news stations, just like we did for that other manufactured faux-crisis-that-didn’t-need-to-be, the debt ceiling fiasco of 2011. All the while, such shenanigans do cause real damage to our credibility as a debtor and the integrity of our institutions…