Abenomics is a Not an Excuse for Comfort-Women Denialism 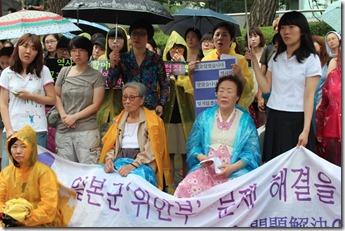 One of the traditional responsibilities of sane conservative parties is to write-out of respectability and legitimacy the scary, nut-job right-wing fringe. There can’t be a ‘no-enemies-on-the-right’ strategy, or you wind up with anti-Semites, racists, and black-helicopter guys grabbing all the media attention and delegitimizing wider conservative goals. In the US, Bill Buckley explicitly intended the National Review to screen out the John Birch Society and the American Mercury. In Germany, the CDU/CSU keeps the nationalist/neo-Nazi fringe at bay. (I worked for both GOP and CSU legislators in the past, so I’ve actually seen this in action. The late-night/AM newsradio listeners come out of the woodwork to tell you all about Jewish banker conspiracies and stuff like that.) In Japan, that means the LDP has to tamp down the endless Pacific War revisionism that keeps popping up. And for as much as I think Abenomics is an important Keynesian antidote to the right-wing monetarist-austerity hysteria of the last five years, it’s also increasingly clear that Abe’s victory allowed the Japanese version of the Birchers to get all sorts of air time they shouldn’t.

Here is what I wrote on my own blog, which has a substantial Japanese and Korean readership (it’s blocked by the great firewall in China unfortunately):

“If you’ve ever read this blog before, you know I try to avoid the details of the Korea-Japan tussle. It gets so emotional so fast. Like most Americans, I want Japan and Korea to reconcile so they can work together on the larger, more important issues of North Korea and China. I don’t take a position on the Dokdo/Takeshima flap. I refuse to call the Sea of Japan the ‘East Sea’ (do you want to re-name the Korea Strait too?). When Koreans push me about the war, I try to deflect the issue. It is really not appropriate for outsiders, especially Americans, to weigh in on the details of Asian disputes. We can’t be an umpire to local fights, and our intervention would be seen as illegitimate by the losing party anyway. This is also the USG’s position: we have no position other than that we want all the parties to work out the disagreements with coercion or force. That’s the right attitude IMO.

Since Abe came into office, I have been defending him in Korea, which is fairly thankless and annoying to lots of people here. He’s made regrettable and obnoxious noises about revising the Kono Declaration. His cabinet is filled with righties, some of them genuinely unnerving. Catering to domestic right-wing attitudes on the war isn’t really what his PM-ship should be about anyway, but my Japanese colleagues say it’s all just cosmetic or needed baggage to push through necessary economic changes. And then there’s always the Global Times – the Fox News of China – to reliably exaggerate any Japanese swing to the right as a return to fascism. It’s easy for China and Korea to get carried away.

Hence, I defended the Abe government early on in Korean media. That didn’t win me any friends here, but I thought it necessary to give him a chance. And I figured Abe was smart enough, even if he is a nationalist, to avoid provoking all Asia over Yasukuni yet again. I got that one pretty wrong *sigh*. I have chastised Koreans for fetishizing Dokdo to point of war preparations against Japan. When Newsweek Korea asked me this week for an article on the ‘rise of right-wing Japan,’ I sent in an article instead saying that Koreans and Japanese need to work out their differences and that the US should not play a ‘moral hazard’ role empowering maximalists on both sides to say outrageous stuff. In that same piece, I criticized President Lee Myung-Bak’s trip to Dokdo last year as an embarrassing, flag-waving nationalist gimmick (which it was).

I also thought Abenomics was a great idea. Austerity has pretty clearly failed in Europe, and if a nationalist Abe was what was needed to shake Japan out of its decline, then so be it. Japan is the main bulwark against Chinese primacy in Asia, even if Japan’s erstwhile colonies don’t want to admit that. In the last few days, I made all these remarks, defending both Abenomics in the JoongAng Daily and a stand-offish US attitude toward the details of the Japan-Korea flap in Newsweek Korea. I am about as ‘pro-Japanese’ – in the sense of encouraging a Korean-Japanese reconciliation – as you get in Korea without getting in trouble.

But the comfort women denialism of the last few days is just too much. Jesus Christ. Do we really have to go through why sexual slavery is god-awful and should be apologized for? And don’t tell me it was ‘prostitution;’ almost all these women were coerced and not ‘paid’ – except that they were given a place to sleep and something to eat. This is a real WTF moment after months of creepy talk from the corners of the Abe coalition. This endless re-writing of the Pacific War in Japan really needs to stop. Abe needs to say something. The respectable right in Japan needs to contain the revanchists, as it does in Germany.

My friend Dan Pinkston of the International Crisis Group here in Korea is a much tougher critic of the Japanese right than I am, but he’s absolutely correct here. If Dan is right that the US could get Japan to lay off the Yasukuni stuff, we should do it. Abenomics is not a blank check for shameless revisionism.”