How Do Americans Feel About Fully Autonomous Weapons? 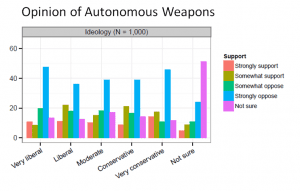 According to a new survey I’ve just completed, not great. As part of my ongoing research into human security norms, I embedded questions on YouGov’s Omnibus survey asking how people feel about the potential for outsourcing lethal targeting decisions to machines. 1000 Americans were surveyed, matched on gender, age, race, income, region, education, party identification, voter registration, ideology, political interest and military status. Across the board, 55% of Americans opposed autonomous weapons (nearly 40% were “strongly opposed,”) and a majority (53%) expressed support for the new ban campaign in a second question.

Of those who did not outright oppose fully autonomous weapons, only 10% “strongly favored” them; 16% “somewhat favored” and 18% were “not sure.” However by also asking respondents to explain their answers, I found that even those who clicked “not sure,” as well as a good many “somewhat favor”-ing respondents, actually  have grave reservations and lean in favor of a precautionary principle in the absence of information. For example, open-ended answers among the “not sure” respondents who claimed to “need more information” included the following:

“Generally, without additional info, I’m opposed. Sounds like too much room for error. Or the terminator in real life.”

“It seems like ideas with good potential eventually end up in the hands corrupt or dangerous people with bad intentions.”

“I have no concrete opinion, but I believe that it is dangerous enough with a human controller, let alone a robot.”

“I don’t know enough about this subject to have a fully formed opinion. It sounds like something I would oppose.”

As these break-out charts detail, this finding is consistent across the political spectrum, with the strongest opposition coming from both the far right and the far left. Men are slightly more likely than women to oppose the weapons; women are likelier to acknowledge they don’t have sufficient information to hold a strong opinion. Opposition is most highly concentrated among the highly-educated, the well-informed, and the military. Many people are unsure; most who are unsure would prefer caution. Very few openly support the idea of machines autonomously deciding to kill.

Interestingly, of the 26% of Americans who at least “somewhat support”ed the idea of man-out-of-the-loop weapons, the most common reason given in open-ended answers coded so far (about half the data-set) is “force protection” – the idea that these weapons will be beneficial for US troops, and many of those who opposed an NGO-run ban campaign say that only the military should be making these kinds of decisions. In that sense, it is interesting to note that military personnel, veterans and those with family in the military are more strongly opposed to autonomous weapons than the general public, with the highest opposition among active duty troops. (Click the graph to enlarge.)

I’ll have more presently on some of the more detailed findings of this study, as well as why it may matter in terms of the legal parameters of debate as the Campaign to Stop Killer Robots picks up speed. Meanwhile, happy to hear feedback as I’m new to survey research and will want to draw on some of these findings in a new paper I’m writing.