APSA Special: Social Movements and the Politics of Markets

So, in the interests of shameless self-promotion, I just wanted to mention that if you are attending APSA and stop by the Cambridge U Press booth, there should be copies of my new book with Ethan Kapstein entitled AIDS Drugs for All: Social Movements and Market Transformations. Pick up a copy, or order a hard or softback version here for a 20% discount (an e-version should be out soon). Below the fold, I’ll describe the book and unpack the argument, but I wanted to raise the question here: who is doing good work in the discipline on the politics of transnational social movements and markets? Most of the relevant newer cites seem to come from sociologists such as Tim Bartley, Brayden King, and Sarah Soule. IR folks, help me out.

Outside and Inside
Outside the discipline, a lot of work in this space by folks emphasizes firm behavior rather than broader market outcomes. For example, Eesley and Lenox in one study assess why environmental groups particular companies and not others and the determinants of firm response. While focused on U.S. companies, Nicole Raeburn’s book on how gay and lesbian workplace rights proliferated in Fortune 500 countries is a notable exception in its macroscopic view.

Inside the discipline, much of the research in the social movements arena, like my last book Moral Movements and Foreign Policy (CUP, 2010), focuses on states and international organizations as the main targets of activity. While there has been great work on movements and markets by the likes of Susan Sell on the politics of intellectual property rights and Ken Shadlen on pharmaceutical companies, I have not seen much new work in political science that goes beyond the anti-globalization years of the late 1990s and early 2000s like Shareen Hertel’s book on sweatshops mobilization.

In researching this book, some of the best work in political science comes out of European scholars of environmental governance like my old friends Phillip Pattberg and Klaus Dingwerth who sought to describe emergent practices of private governance, focusing on niche markets like forest certification standards. But, in terms of broader market outcomes like access to medicines or information, our reading of the field was that this is less well-trodden territory, at least of late.

The Argument – Strategic Moral Action
In our book, Ethan and I seek to answer the general question, “Under what conditions can social movements transform markets?” We try to get at that broad question through interrogation of the case of universal AIDS treatment advocacy that has successfully helped extend access to live-saving antiretroviral drugs from the low hundreds of thousands in early 2000s to more than 8 million people in low- and middle-income countries. During this period, the resources available for fighting HIV/AIDS rose from the hundreds of millions to the tens of billions of dollars. Over that decade, the prices for antiretroviral (ARV) drugs fell from costing more than $10,000 per patient per year to less $100 per year per patient for first-line drugs. In essence, the principle of market access was transformed from one based on high-price, low-volume to one based on low-price, high-volume. How did this happen? 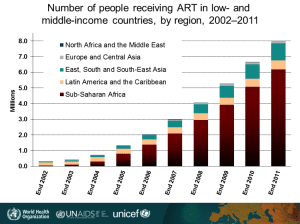 We make the case that the market for AIDS drugs was politically constructed, that generic companies that came to dominate provision of drugs did not enter the market spontaneously. They were actively recruited by advocates who appealed to them to cut prices and enter the market but who also successfully helped organize and support demand. More generally, we tried to identify the essential pieces that made market transformation possible and probable in this case.

Our theory argues that advocacy-led market transformations are most likely when several distinct factors conjoin. We suggest that a movement’s ability to transform markets depends upon whether: (1) markets are contestable; (2) they have framed their arguments to resonate across their target audiences; (3) the movement itself has a coherent goal; (4) the costs are low, or the benefit-to-cost ratio is favorable; and, finally, (5) stabilizing institutions are present to reward continued achievement of the new market principle.

The book is organized around the five factors with chapter length treatments of each in Chapters 2-6. In those chapters, we draw on diverse sources of evidence including experimental survey work as well as extensive elite interviews with civil society activists, drug company executives, and public officials from national and intergovernmental organizations, among others.

We suggest that because the market for ARVs was concentrated among a handful of producers, the market could change quickly and there was pressure to do so given the highly unequal access differences between rich and poor countries. At the same time, the rules protecting intellectual property of firms were new, giving advocates leverage to contest them. Because AIDS drugs were essential for survival, advocates could frame market access to them in terms of bodily harm, that denying drugs to those living with HIV would consign them to death. This, we try to demonstrate through experimental evidence, had broad appeal. At the same time, by initially focusing on rducing the prices of AIDS treatment drugs down, advocates were able to unite around a common ask, leaving aside more difficult and politically contentious issues of AIDS prevention and wider issues of treatment access like infrastructure and distribution. Once advocates were able to persuade branded drug companies to reduce their prices and for generic companies to enter the market and cut prices even further, the high per patient price tag declined as a compelling objection to extend access, both to firms and to donor countries. Once this rationale was overcome through successful pilot programs, procurement programs and drug quality regimens backstopped the new market principle based on the aspiration of universal access (though still about half of the world’s population sick enough to require treatment has yet to receive it). This is, in essence, our argument of strategic moral action for the AIDS treatment case, but we seek to do something more.

Applications to Other Arenas
These insights are then applied in Chapter 7 to a range of other cases including malaria, maternal mortality, water/diarrheal disease, non-communicable diseases, education, climate change, the ivory trade, sex trafficking and the Atlantic slave trade. In that comparative chapter, a draft of which is available here, we code these diverse cases for the likelihood of market transformation. Most of these cases were selected for their intrinsic importance. Through the lens of market transformation, we hope we can provide fresh insight to important real world problems like climate change and unpack why advocates have had such trouble succeeding on this issue.

In a sense, climate change is a least likely case from our perspective for successful market transformation. The market is fragmented and not easily contested, advocates have struggled to identify a transnationally compelling frame, the movement is now divided without a coherent policy ask, the perceived costs of action for both governments and private actors are high, and there are few institutions in place to stabilize and reward new market outcomes to reward clean energy and penalize carbon-intensive sources of energy.

We hope our argument also travels to other issues that we didn’t have a chance to explore like the Occupy Wall Street Movement. That movement, we argue in passing, did not have a coherent policy ask, so one reason we think it was such a ephemeral voice was the failure for the group to unite around an organizing demand. In any event, we hope that this book proves useful to scholars interested in movements and markets in a number of different domains.