A prominent “rationalist” explanation for war concerns commitment problems created by the anticipation of rapid shifts in power (see also here and here). When a state expects that the 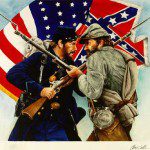 mere passage of time will lead it to fare worse in a potential future war against its rival, the rival’s inability to credibly promise not to exploit its future power by demanding a revision of the status quo can lead tempt the first state to attack so as to forestall (or at least slow down) the shift in power.

The canonical example of this was provided by Thucydides, who wrote in History of the Peloponnesian War “It was the rise of Athens and the fear that it inspired in Sparta that made war inevitable.” But today’s international relations students, alas, have little interest in antiquity. Nor are they particularly impressed by systematic evidence that wars occurred more frequently between 1816 and 2001 in the presence of observable indicators that a substantial shift in the bilateral distribution of capabilities was on the horizon (which I nonetheless provide in class). For better or worse, our students view as immediately suspect any theoretical claim that cannot be illustrated with an example they’ve actually heard of.

For that reason, I now discuss the American Civil War after explaining the general logic of commitment problems induced by an anticipation of a future shift in power.

Why the American Civil War? Is it because the Union was growing more rapidly than the Confederacy? No, the reason I like this example so much is because of this working paper by Paul Poast, which argues that Lincoln’s decision to invade the South (which was not how he originally intended to respond to the secession) was motivated in no small part by a desire to prevent British recognition of the Confederacy.

I can’t do Paul’s argument justice in this post, but, in brief, his argument is:

This not to say that fear of British recognition was the reason for the war, but I think Paul makes a compelling case that it was an important consideration. When discussing the causes of the American Civil War, most people tend to focus on what the war was fought over. But, as I repeatedly tell my students, if you want to explain (a) war, it is not sufficient to identify what (the) actors disagree(d) over, because most disagreements don’t end in war. If we are to explain war, we must explain why a more efficient means of resolving the disagreement was not chosen. In this case, that means explaining why, after 75  years of doing just that, it was no longer possible for the North and the South to manage their disagreement about slavery peacefully. Lincoln’s election is surely part of the answer to that question, as is the secession, but even then, we know that Lincoln believed the crisis could be resolved short of war. Thinking about commitment problems induced by the anticipation of future shifts in power helps us to understand why Lincoln changed his mind, and thus pointing to the American Civil War helps me to convince my students that commitment problems are a thing. Perhaps you will find this example useful as well. At any rate, I encourage you to read the paper, because Paul does a much better job of fleshing out the argument than I did above.