I found two pieces that asked similar questions to my earlier post on why this typhoon appeared to be so destructive and why similar storms in Asia are especially deadly. Both raise interesting questions for scholars of security studies and environmental politics.

Max Fisher raises a similar set of concerns in the Washington Post asking why the Philippines wasn’t more ready. Beyond the sheer size of the storm and the country’s poverty, he also addresses the governance challenges, writing:

The Philippines’ political system, though, can make centralized governance difficult. Owing to the country’s remarkable diversity — more than 100 languages are spoken, including eight recognized regional languages — local and provincial governments can have a degree of autonomy. That helps with political stability, but it makes it tougher for the central government to push through big infrastructure development, or to organize a national response once disaster strikes.

He also points to a related issue that I think deserves more attention among scholars of security studies, the connections between natural hazards and insecurity and challenges to local order, which has received some attention by social scientists (including by the likes of Dawn Brancati, Nel and Righarts, Claude Berrebi, Drago Bergholt, Rune Slettebak, Smith and Quiroz Flores) but not nearly enough. The connections between natural hazards and conflict onset have thus far produce mixed results, in part because of inadequate data but also because sometimes scholars use data on disasters (which is a social process) as a proxy for the physical process of natural hazards exposure. That’s a mistake since disasters are an outcome measure that reflect a mix of physical exposure to hazards, where people live, what resources they have to protect themselves, and whether their governments can or will help them in times of need.

Fisher helps bring our gaze down to the causal mechanisms that might lead to looting and insecurity in the aftermath of natural hazard events:

The Philippine military is also struggling, in Tacloban and elsewhere, to simply establish order. Looting has gotten so bad so quickly that relief groups say their convoys have come under attack. This may be an extension of the country’s ongoing struggle with crime, which has grown so severe that the government was losing control of public order long before the storm hit.

He also contrasts the Philippines experience with hazard prone Japan where hardly any looting occurred in the aftermath of the 2011 earthquake and where large-scale evacuation was achieved in an orderly fashion within a couple of days. In the Philippines, Fisher notes that fears of looting may have also made people reluctant to leave.

The apparent fear that the Philippine government would be unable to provide or police may be self-reinforcing, making criminals and non-criminals alike more likely to loot if they believe the state won’t come through. It may also help explain why a number of families in the worst-hit areas reportedly ignored the warnings and stayed in their homes. Reportedly, many feared that the state would be unable to protect their homes from looters, leading them to try to do it themselves.

An AP story draws a slightly different conclusion, suggesting that decentralization and federalism may be to blame, contrasting the situation in the Philippines with Vietnam:

[The Philippines] lacks a strong central government and provincial governors have virtual autonomy in dealing with local problems.

Contrast this with Vietnam, which sees about a dozen typhoons per year and is similarly poor and densely populated. But a centralized, Communist Party-led government broadcasts clear messages that cannot be ignored by the provinces.

The story behind the destructiveness of Haiyan rings true of most powerful cyclones that occur in this region of the world: 33 of the 35 deadliest tropical cyclones on record have occurred in southern or southeastern Asia – due to a confluence of meteorology, geography, population density, poverty and government.

Of this specific storm he notes:

In the case of Super Typhoon Haiyan, Tacloban city and its 220,000 inhabitants are located at the tip of a funnel-shaped bay in the Leyte Gulf. The center of Haiyan’s eye brushed just a few miles south of Tacloban, putting the city right in the strongest part of the storm’s right-front quadrant. This unfortunate location along Haiyan’s track led to Tacloban receiving the brunt of the storm’s Category 5-equivalent winds, destroying“up to 80%” of the city’s buildings. He elaborates by talking about the shape of the bay:

Adding insult to injury is the shape of the bay on which Tacloban sits. Haiyan’s storm surge was funneled into this bay and amplified, leading to a storm surge reaching 10 to 20 feet deep in spots. This combination of storm surge, high population density (clocking in at nearly 2,900/square mile), and the simple destruction of anything that couldn’t stand up to the winds accounts for the steep death toll estimates.

Another consideration is whether anything could have been done differently. He contrasts the situation in the Philippines with the cyclone that struck India in October where mass evacuations meant that only 44 people died in a densely populated region despite large-scale damage.

That might not have been possible in this mountainous island in the Philippines, but Mersereu writes that for those who did evacuate, many of the buildings could not withstand the storm. Here, the sheer intensity of the storm may have been too great, but I wonder what better building codes and infrastructure might have meant for the deadliness of this typhoon.

This multi-media effort from the New York Times is simply stunning. 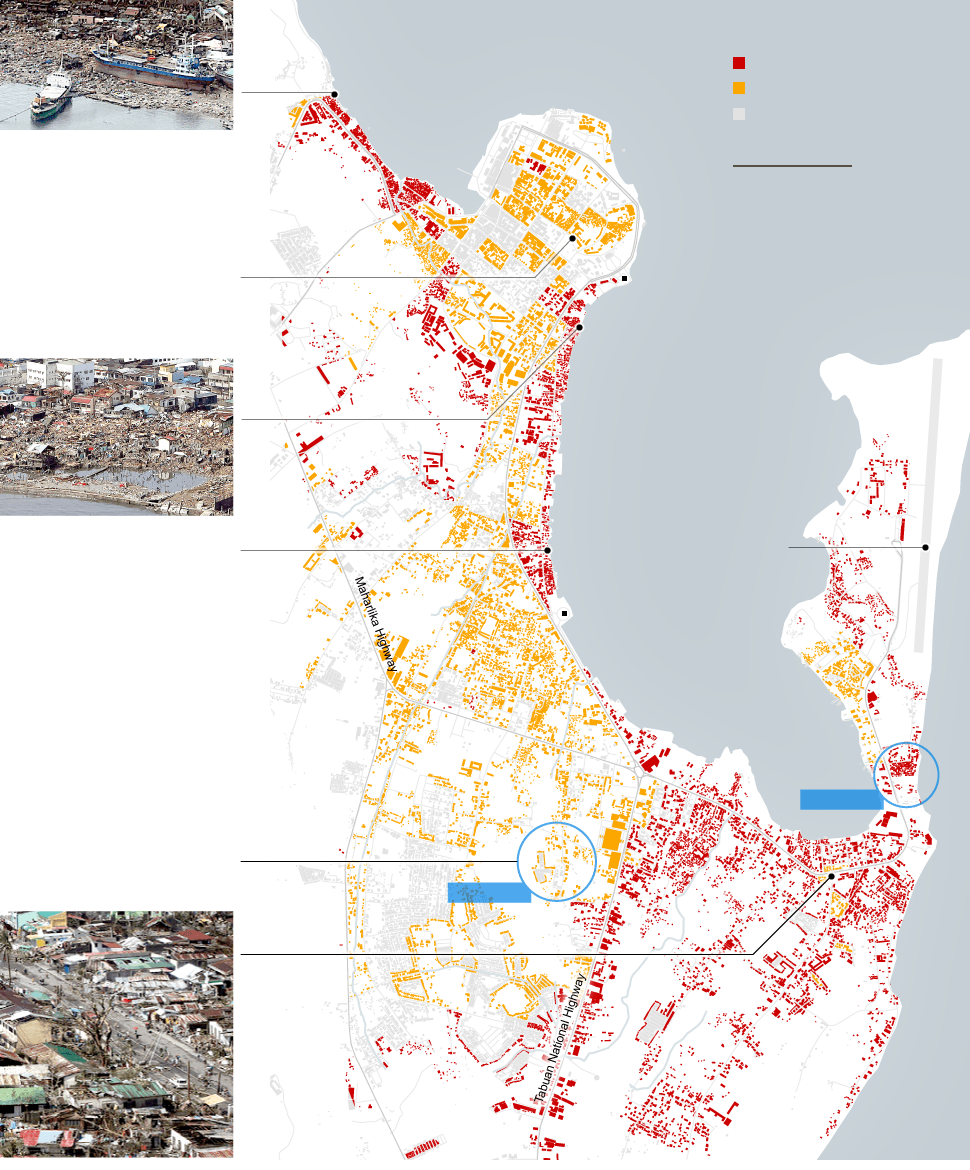