With Crimea’s secession and accession drama still unfolding, we wait with baited breath about whether we will bear witness to yet another war (Kimberly Marten’s post on the Monkey Cage is sobering). Sure hard to believe that Steven Pinker is right with Syria blazing, the Central Africa Republic aflame, and Ukraine and Russia poised for conflict.

More parochially, I’ve been reading the story, perhaps apocryphal of the female job candidate whose negotiations for a job led to the school rescinding the offer. I’ve also been followed additional debates about underrepresentation of women in foreign policy and whether academics have anything to say. Krugman had some choice words for Nate Silver’s new enterprise, reminding us of the importance of theory.

Landing the Academic Job: The Art of Negotiation

Philosophy job market candidate gets a job offer, sends email with a variety of asks, and liberal arts Nazareth College rescinds the offer, so says anonymous blog post. Sets the internets ablaze with commentary. Did she ask for too much since this was a liberal arts college (personally I think that’s bullshit)? 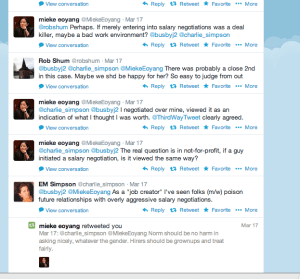 To discuss how you are negatively perceived forces people to see you though your detractor’s eyes. To discuss sexism is to invite pity, to be reduced, even in support, to something less than what you are. When you work in the realm of ideas and trade in the currency of respect, this is a tough balance to pull off – and it goes hand in hand with the tough balance Slaughter describes of career and family.

But you can’t be an effective fox just by letting the data speak for itself — because it never does. You use data to inform your analysis, you let it tell you that your pet hypothesis is wrong, but data are never a substitute for hard thinking. If you think the data are speaking for themselves, what you’re really doing is implicit theorizing, which is a really bad idea (because you can’t test your assumptions if you don’t even know what you’re assuming.)

Now, about FiveThirtyEight: I hope that Nate Silver understands what it actually means to be a fox. The fox, according to Archilocus, knows many things. But he does know these things — he doesn’t approach each topic as a blank slate, or imagine that there are general-purpose data-analysis tools that absolve him from any need to understand the particular subject he’s tackling. Even the most basic question — where are the data I need? — often takes a fair bit of expertise; I know my way around macro data and some (but not all) trade data, but I turn to real experts for guidance on health data, labor market data, and more.

This is what you get when you analyze big data with no theory. pic.twitter.com/ZoQ0LZhFa0