Ukraine: A Tale of Dueling Humanitarianisms?

This is a guest post by former Duck of Minerva blogger Betcy Jose, Assistant Professor at University of Colorado-Denver and contributor to Al-Jazeera and Foreign Affairs.

As the number of posts here suggest, lots of us are watching the fast-moving and somewhat unexpected events in Ukraine with great concern and interest.  Others have expertly discussed the reasons for Russian military intervention in Ukraine and how the international community might respond to it (here, here, here, and here).  I’d like to contribute a different angle to this complex story by inquiring into Russian narratives for its military action in Ukraine.

When Vladimir Putin requested the Russian parliament’s approval for authorization to use the military in Ukraine, he claimed Russia needed to act because of “the threat to the lives of citizens of the Russian Federation, our compatriots, [and] the personnel of the military contingent… deployed in… Ukraine.”  Putin also made this argument to President Obama during their March 1 phone conversation.

That Russia might be concerned about its security interests with the ouster of a supportive Ukrainian President Yanukovych isn’t difficult to grasp.  Not only is Crimea important to Russia historically and for identity politics, but Russia’s only warm water naval base is in the Crimean city of Sevastopol.  A pro-Europe government in Ukraine, turning away from Russia and controlling Crimea, can have negative impacts on these Russian interests. Concerns for these interests provide strong motivations for Russian intervention. Which is why the use of humanitarian arguments to also justify this intervention are puzzling.  In addition to protecting its soldiers, Russia asked its Parliament to authorize military action in Ukraine to protect its citizens.  However, at the time of the request, there were few stories in the Western media about attacks against ethnic Russians or Russian citizens in Crimea prior to the intervention. So why bother?

One obvious answer might be that the resort to humanitarian claims might provide legal cover for interest-driven intervention which violates international law.  However, that argument is unsatisfactory for a number of reasons.  First, the humanitarian argument is harder for Russia to make in this instance than in the case of its intervention in South Ossetia in 2008.  As Stefes and George argue, Russian citizens had been attacked in South Ossetia prior to Russian military action there.  Yet, as noted above, threats to Russians in Crimea had not yet materialized to the extent necessary to justify a rapid and internationally unsanctioned military intervention on their behalf.  Second, the emerging norm of Responsibility to Protect (R2P) requires military force for humanitarian considerations to be used as a last resort.  It would be difficult to argue that Russia exhausted diplomatic options prior to its use of force in Crimea.  Third, international endorsement for the use of humanitarian force is preferable both for normative and interest based reasons.  Prior to its conflict with Georgia, Russia arguably made its case to the UN Security Council about the need to protect Russians in South Ossetia to gain this approval.  The desire to defray the costs of military action in Iraq is a reason some claim the United States pitched humanitarian concerns to the UN Security Council.  However, as stated previously, Russia has not pitched its justification for intervention to an international audience but to a domestic and regional audience.  Fourth, citing humanitarian concerns in Crimea opens Russia up to claims of hypocrisy for its obstruction of interventions in Syria and Libya, as the following cartoon depicts. 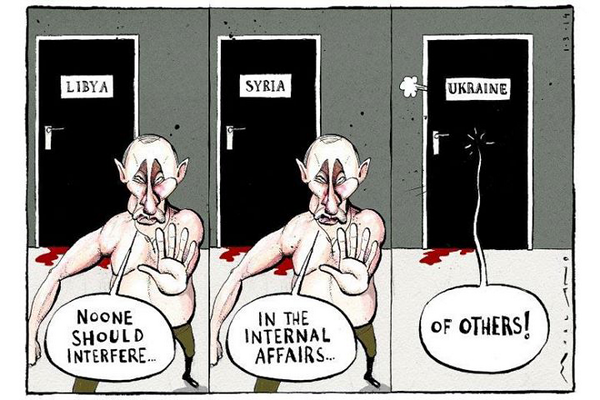 Thus, based on conventional interpretations of permissible humanitarian military action, Russia’s actions in Ukraine might not pass muster or seem consistent.

So why make the argument?  One reason may be that Russia utilized these arguments to present an alternative justification for humanitarian action.  In other words, Russia may be attempting to influence the still yet-to-be defined parameters of the emerging norm of R2P.  As Chris Borgen argues about Russian rhetoric surrounding the Georgian conflict:

In the case of South Ossetia, Russia found a set of legal concepts different in application from how most states would have interpreted international law, resonated with the views of a regional audience that Russia was targeting. Thus, the primary way that Russia may be changing international law is not, at first, by convincing states of a different interpretation, but rather by providing voice to an interpretation that resonates with norms already accepted by a certain grouping of states. What Russia has really done is organize and rationalize a legal argument around existing norms that have been against the prevalent rules of international law and, possibly, started its own interpretive community that will legitimize its actions and, in certain aspects, allow it greater leeway.