Many Ducks are posting about their highlights from #ISA2014. Mine – aside from the Bloggers’ Reception and the many smart junior scholars I met in the lobby – was a meta-theoretical twitter conversation with former Duck Patrick Thaddeus Jackson occurring as I was headed to the airport.

First the context. Just before departing, I live-tweeted Chris Tenove‘s “Representations Beyond Borders” panel (description here) after my presentation on same. There were many terrific papers: Wendy Wong and Ron Levi on “money as representation”; Chris on who gets to represent the aggrieved at the ICC; Hans-Peter Schmitz on how representations of acoholics prevent alcohol from being taken seriously as a global problem despite its global health burden.

My paper was on science fiction representations in advocacy campaigns (here is the YouTube trailer). While discussing my paper, Sarah Stroup observed that scholars of the sci-fi/IR intertext have largely (and surprisingly) neglected Star Wars. When I tweeted thus, the great PTJ (from somewhere else at the conference) replied with:

The rest of the conversation is below the fold, but suffice to say even if I accept PTJ’s definitions of science fiction and high fantasy (and I’m not at all sure I do) I am unconvinced that Star Wars is

Indeed as an empirical if not interpretive “fact,” (though let it be noted that PTJ and I also disagree on the definition of ‘facts’), Star Wars is understood as and increasingly invoked in ways that are extremely political and subversive.

See? Also: this and this.

Now I don’t know exactly what is going on here – the Sith Lord has been barred from the ballot in Ukraine – but I do (tentatively) think PTJ and I agree on three things: 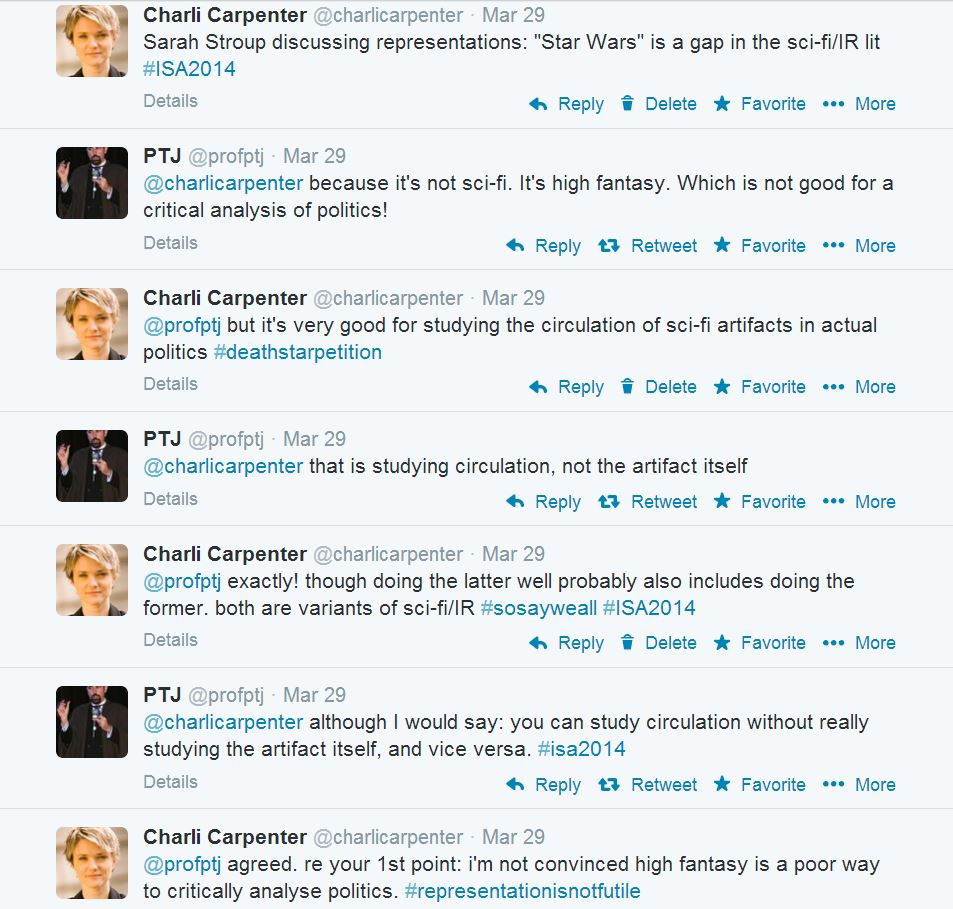 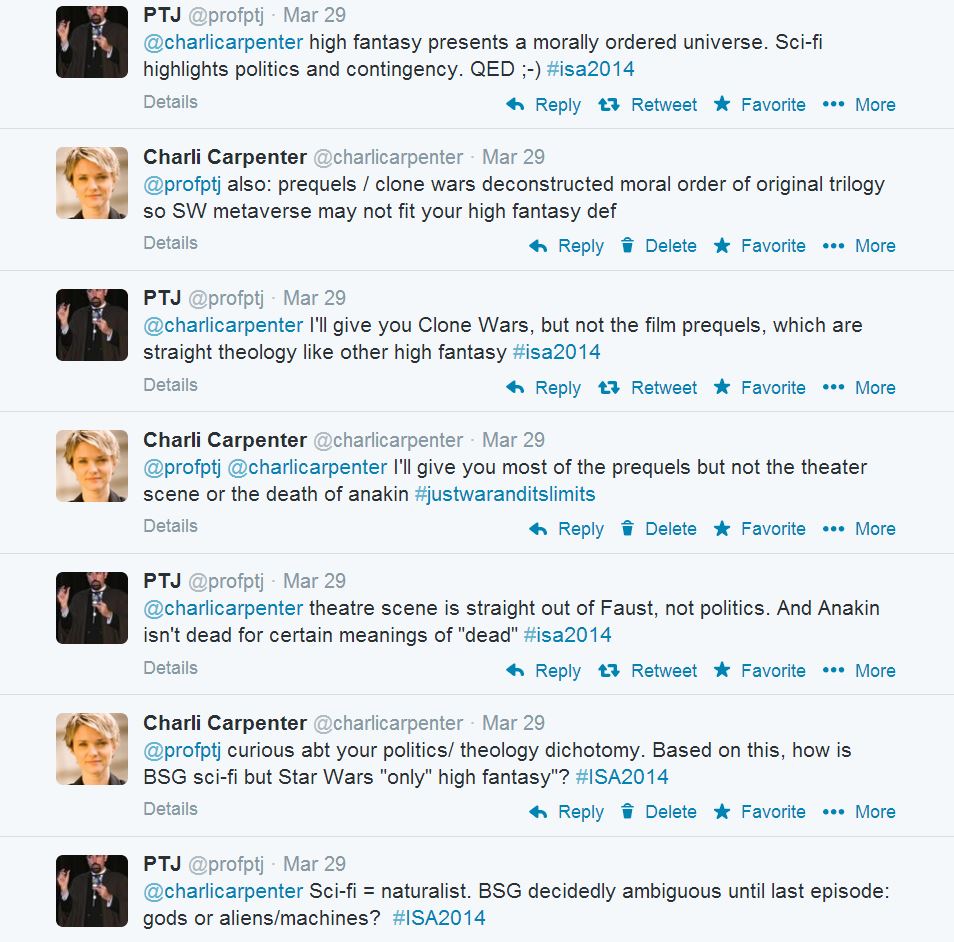 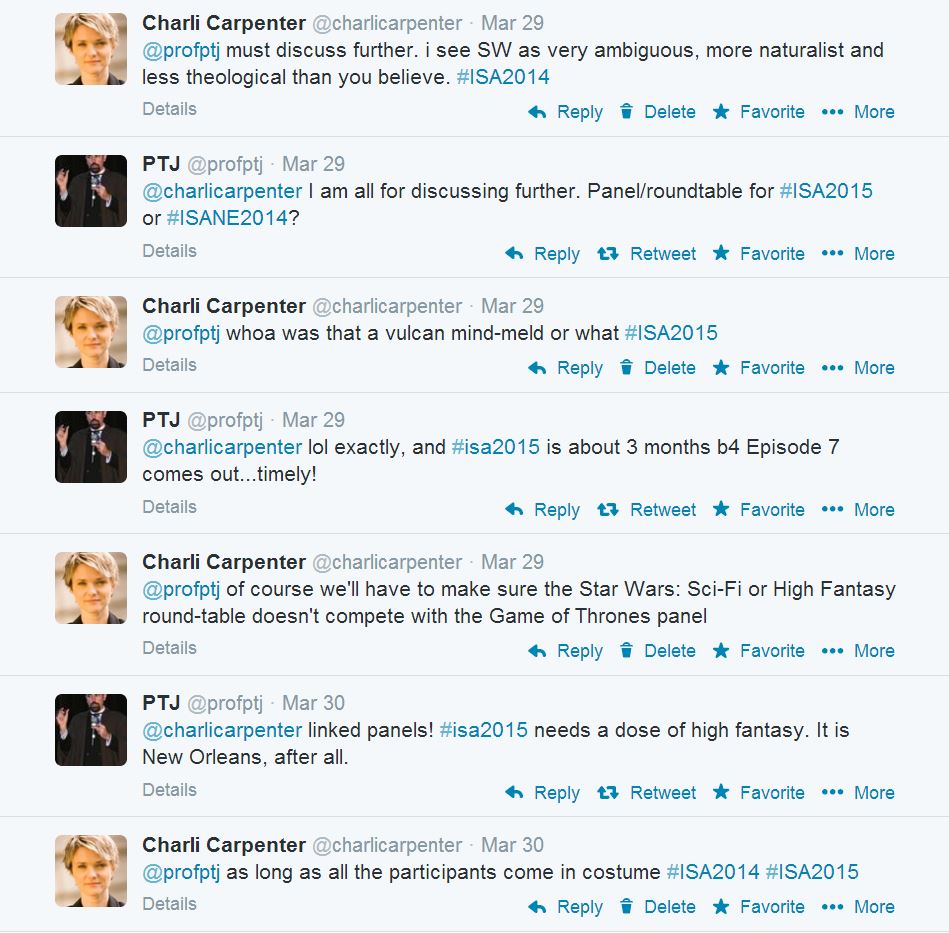 What do readers think? Does Star Wars count as science fiction? And if so, what explains the Star Wars gap in the literature?

*To be fair, the “Jedi religion” is framed as a kind of righteous wizardry in the originals, but that said there’s plenty of science in the fiction of Star Wars. Even the Force is essentially an energy field consistent with quantum theory, and in the prequels we get glimpses into a bio-chemical basis for Jedi power in the midi-chlorians, so I think even the “magic”  can at least argued to turn on science rather than theology or at least that this dichotomy might be worth interrogating.

**The originals were perhaps more ‘morally ordered’ than something like Battlestar Galactica, in that there are clear good guys and bad guys and epic battles between good and evil and the lines aren’t often blurred; but surely these easy dichotomies are chipped away at by elements in the prequels and later Clone Wars that introduced complexity, contingency, and perspective.