Report: US Drone Casualty Estimates Are Likely Too Low

Defense analyst Lawrence Lewis has authored an unclassified report critically analyzing the metrics used to estimate civilian casualties from drone strikes.* Lewis is an analyst and field representative for the Center for Naval Analysis, which published the report today. He has led numerous projects on operational effectiveness for DOD, including the Joint Civilian Casualty Study in support of General Petraeus, and knows of what he speaks. He is also the author of a classified study of casualties from manned and unmanned air attacks in Afghanistan. 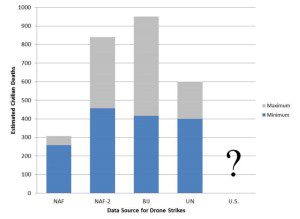 This remarkably balanced analysis begins with the observation that US casualty statistics are significantly lower than NGO counts, and provides an explanation of how institutional cultures and estimation techniques can result in such a gap. The report argues that this can be explained by three factors: the irregular nature of the enemy that makes it difficult to distinguish civilians from combatants, misidentifications that often occur as a result, and the fact that the US uses air surveillance rather than ground surveillance to conduct battle damage assessments.**

Although the report primarily serves as context on the production of casualty estimates, Lewis also uses his analysis to make at least two other important conceptual points that are generally lost in the debate over drone casualties:

First, that “precision” in weaponry is not merely a function of weapons systems but also factors like planning and training, which means that it is misleading to focus on drones as “precise weapons.”

“The failure to recognize and mitigate factors besides the platform in the targeting process [can] result… in an increased risk to civilians from the use of drones, despite some desirable characteristics of those systems.” (p. 2)

Second and crucially, this is the first report I know of to underscore that the definition of a civilian, crucial in terms of coding civilian casualties, is meant to include ‘unknowns’ which are often not considered civilians in both US and NGO/UN counts:

“It is important to note that this is a negative definition: per international humanitarian law, the burden of proof is to determine whether a casualty is a combatant. If this is in doubt, it is to be considered a civilian.” (p. 9)

To his credit, Lewis corrects for this important mistake, made by analysts across the board, in the graphs and charts he prepared for his report.

In an era where drone casualty statistics are highly politicized and largely incommensurable, this is one of the more balanced analyses I’ve seen. Lewis not only provides some information with which to understand and critically compare NGO reporting on drone deaths, but also provides a far more nuanced explanation of how the United States “sees” civilians and civilian casualties for the purpose of counter-terror policy. Hope this one gets widely read and discussed.

*Note this report deals with strikes in Pakistan only, rather than strikes broadly; and ducks questions of the overall legality of such strikes inside sovereign territory.
**While I’m not entirely convinced that the first two can explain the gap – these factors could as easily inhibit NGOs and the UN from accurate counts but seem to do so only in the US case – the third factor regarding how estimations are done is extremely informative and makes a lot of sense.