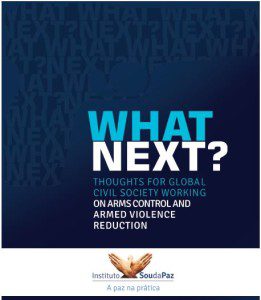 For a perspective on how global civil society might better mobilized for armed violence reduction read this new report, by a Brazilian humanitarian disarmament NGO, Instituto SoudaPaz. “What’s Next?” is both an up-to-date manifesto on the importance and political tactics by which small arms advocates might more meaningfully influence global debate and policy, and a reflection on the nature, challenges and promise of global civil society mobilization in this area which might be usefully generalized to other thematic transnational advocacy domains. It’s a long read but a helpful resource if you are doing research or praxis in this area.

What I like best about this report is that it is coming from an NGO rooted in the global south. The World Cup has put the spotlight on human rights issues in places like Brazil, but too seldom do news outlets or researchers in the north pay attention to what activists in countries like Brazil have to say about the same global issues. Here we find a more inclusive and critical perspective than many publications that come out of Northern-based organizations, and connects to a wider effort – exemplified by initiatives like OpenGlobalRights – to engage the global south in human rights and humanitarian practice more inclusively. Not surprisingly, when it comes to small arms, the report explicitly attends to questions of access, power, and the political economy of ideas and influence in a global policy arena that remains, as I describe in my book, deeply hierarchical. And as a South-initiated effort to create a global dialogue on how to produce better small arms policy, I hope it gets lots of attention in the mainstream disarmament sector.