Potpourri this week with Micah Zenko on the tendency for mission creep in humanitarian interventions and other U.S. military missions, Marc Lynch pushing back on whether arming the Syria rebels would have worked, story on ISIS’ capture of the Mosul Dam and an interesting twist on water and security challenges, bad air in China (I’m shocked) and the challenges the country is finding tapping its shale gas reserves, and, finally, why the lead Sierra Leone doctor fighting Ebola didn’t get the experiment treatment.

This has been a hell of a summer for bad news, foreign and domestic (Ferguson and Robin Williams’ death are just the latest in a dark period by contemporary standards). Internationally, Gaza and Ukraine were temporarily displaced by horrific stories of Islamic State militants beheading minority groups in northern Iraq.

Iraq, Syria, the Middle East
Just as President Obama authorized aid drops of humanitarian relief to the Yazidis trapped on Mount Sinjar and airstrikes against ISIS fighters about to besiege the Kurdish stronghold of Erbil, Hillary Clinton gave an interview that was widely interpreted as a knock against her former boss:

– Peter Beinart makes the case for humanitarian efforts in northern Iraq based on the Pottery Barn rule of ethics:

It’s a risk worth taking, in part because in Iraq today, as in Southeast Asia four decades ago, we are culpable. Were it not for our war, and the anarchy it has bred, the Yazidis would likely not be facing imminent death. The reasons Americans want to turn away from Iraq are precisely the reasons we should not.

– Micah Zenko makes the case why humanitarian interventions often morph into something else:

When you listen to administration officials today, assume that their claims of a limited, relatively short, and narrowly scoped intervention will turn out to be false. Secretary of State John Kerry acknowledgedthat, in reversing the threat posed by the Islamic State militants, “The president has taken no option off the table.” Meanwhile, an anonymous official stated that White House conversations have focused on limiting the intervention, because, “[Obama] did not want to create a slippery slope.” But, when the United States intervenes militarily in another country it does not have control over the decline or slipperiness of that slope. The two most likely outcomes of the most recent U.S. attacks in Iraq are that the lives of some civilians will be saved in the near term, and that there will be a military commitment larger and longer than what administration officials presently claim.

Would the United States providing more arms to the FSA have accomplished these goals? The academic literature is not encouraging. In general, external support for rebels almost always make wars longer, bloodier and harder to resolve (for more on this, see the proceedings of this Project on Middle East Political Science symposium in the free PDF download). Worse, as the University of Maryland’s David Cunningham hasshown, Syria had most of the characteristics of the type of civil war in which external support for rebels is least effective. The University of Colorado’s Aysegul Aydin and Binghamton University’s Patrick Regan have suggested that external support for a rebel group could help when all the external powers backing a rebel group are on the same page and effectively cooperate in directing resources to a common end. Unfortunately, Syria was never that type of civil war.

ISIS has captured the Mosul Dam, threatening both the water supply to Baghdad but also could be used to unleash a wave of water flooding folks in Mosul and Baghdad

ISIS has already used Iraq’s water supply as a weapon. Earlier this year it seized control of the Falluja Dam, in Anbar Province, and flooded a vast area that sent thousands of refugees fleeing, submerged hundreds of homes and several schools and interrupted the water supply to southern Iraq. 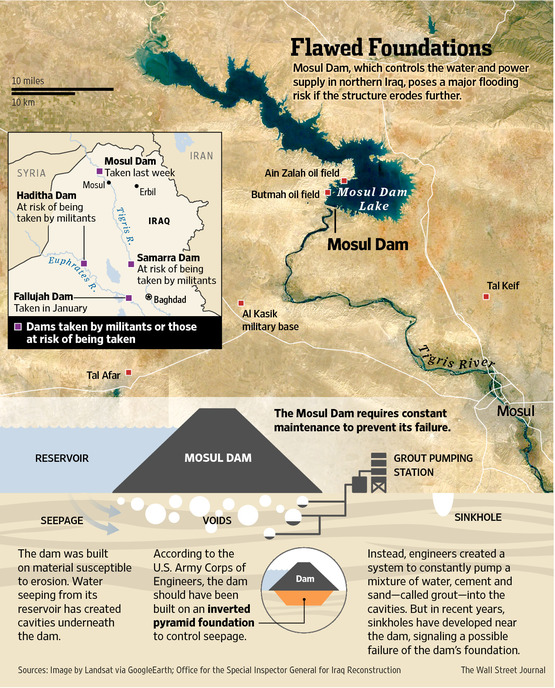 China, Energy, and the Environment
– Technology Review ponders whether Shale gas is a bust in China?

China is estimated to hold the largest technically recoverable reserves of shale gas in the world—nearly twice as much as the U.S. But the shale industry in China has struggled to get off the ground. Most projects are still in the exploration phase. In many cases the formations that hold gas are deeper than in North America and more expensive to reach. Further, Chinese shale tends to have more clay in it, which is an obstacle to extraction (see “China Has Plenty of Shale Gas, But It Will Be Hard to Mine”). These challenges led the government last week to reduce the 2020 shale-gas target to 30 bcm.

– In other news, only 9 of 161 (!) cities in China met the country’s new clean air rules in the first half of this year

If you are looking for a Chinese city with clean air, your best bets would be Shenzhen, Zhuhai, Zhoushan, Zhanjiang, Yunfu, Beihai, Haikou, Sanya or Lhasa, according to the Ministry of Environmental Protection. Chinese leaders have vowed a “war” on pollution as one of its most visible forms, smog, regularly envelops the country’s major cities, particularly in the north. Health officials warn that exposure to fine particulate matter, known as PM 2.5, can lead to serious health problems. Last year, a doctor treating the country’s youngest patient ever diagnosed with lung cancer, an 8-year-old girl, attributed the disease to air pollution.

Ebola
– The New York Times unpacks why the lead doctor in Sierra Leone didn’t get the experiment treatment for Ebola even though relief workers had it on hand.

“What they really didn’t want to do was kill Dr. Khan with their attempt at therapy,” said Dr. Armand Sprecher, a public health specialist at Doctors Without Borders. “If word got out that M.S.F. killed Dr. Khan, that would have implications for outbreak control,” he added, using the initials for the French name of the relief group.

– Though the WHO now endorses the use of the experimental drug in humans, the manufacturer now says it is out of supply: