You Are Doing It Wrong

The former Greek finance minister Yanis Varoufakis (also a former colleague) has compared Greece’s situation to “fiscal waterboarding” at the hands of its creditors. Thomas Piketty has accused Germany of forgetting its own post-World War II experience with debt relief. When I read some of the appeals to Germany and the European Union on Greece’s debt situation,  I thought as an act of strategic framing that Greece/Syriza (and to a lesser extent those of its supporters like Piketty) might be going about it wrong.

As I wrote about in my first book Moral Movements and Foreign Policy, in the late 1990s, the Jubilee 2000 campaign galvanized a global movement to write-off the debts of the world’s poorest countries. That movement succeeded in persuading key creditors, including Germany, as well as the World Bank and IMF to embrace (or at least grudgingly implement) debt relief.

Now, the stakes in the current situation are very different. Then, Germany was only owed about $6 billion by developing countries, and unlike Greece with the common currency, Germany’s own economic situation was scarcely implicated in the economies of the developing world. That said, there are some parallels here that I think are potentially relevant, the traditional reluctance by the German finance ministry and elites, particularly among Christian Democrats, to write-off debt being among them.

The Jubilee 2000 campaign succeeded in putting moral pressure on creditor governments and international organizations. By framing their campaign in terms of the Christian notion of a Jubilee year, the campaign was able to mobilize religiously minded supporters at the grassroots and elite levels in many countries. While that appeal did not resonate everywhere (I talked about the case of Japan in my book), the campaign was particularly successful in identifying a frame that had  far-reaching appeal in many countries, generating international support and pressure for action. ticular moments where campaigners were able to turn the world’s gaze on Germany to be more forthcoming on debt relief. Indeed, the cover of my book shows the human ring of 40,000 campaigners who encircled the summit and the Cologne cathedral. While the Germany case ended up on the cutting room floor for my book, my dissertation goes into more detail. There I describe the stakes for the new left-leaning government headed by the recently elected Gerhard Schroeder:

By being host to the G-7 summit, the Germans wanted to have a successful meeting. National prestige and reputational concerns become significant motivating forces for the hosts of such summits. Advocacy efforts created what was perceived as a political success, a new agreement on debt. This put the onus on the hosts to lead….

As Peter Lanzet of the Protestant relief service EED argued, “As for the SDP, I don’t think without mass mobilization Wieczorek-Zeul would have had the ear of Schroeder to that extent.” In this regard, Misereor’s George Stoll saw the contribution of the churches as especially important for mass mobilization. You can “have expert groups that do brilliant research,” he argued, “but if you want to have a chain of 40,000 people at the G-8 Summit, you need 40,000 people to come from all over Germany.” If you want the issue to be covered by the press, he suggested, you also needed this mass of people to turn out. How was the campaign able to mobilize people? As Jurgen Kaiser argued, the campaign was able to mobilize people because the message transcended the political system. Even though the core support for the campaign came from the “ecumenical left,” Jubilee rang into the CDU stronghold with a former CDU Minister for Social Affairs, Norbert Blum, taking part in the human chain.

Jubilee campaigners did try to evoke Germany’s own post World War II past with respect to debt relief (for a recent effort with respect to Greece, see here), with British campaigners sending thousands of postcards to the government of Helmut Kohl with pictures of the signing of the 1953 London agreement. Tom Callaghy and Ronald Kassimir described the campaign:

As I write in my dissertation, I’m not sure that effort was all that successful, as it raised objections from the German government who said their situation was very different at the end of World War II compared to developing countries, similar to objections Kindred raised on this blog about comparing Germany and Greece today:

Believe me, those statements and others like them were noted in Berlin and Frankfurt. This is the context of the last 6 months of negotiations, which surely is relevant. In Syriza’s words the reduction of Greece’s debt is explicitly linked to continued German genuflection over the War. In addition to being unbelievably offensive, this does not seem to have the desired effect on Germans or the rest of Europe, which was as damaged by World War II as Greece was, so doubling-down on this strategy is unlikely to have any positive impression on anyone.

More broadly, what I think the Greeks have failed to do, unlike the Jubilee 2000 campaigners, is create a reservoir of good will and support in Germany, the rest of Europe, and the world for their cause.  Jubilee campaigners tied the shackles of heavy external debts to human suffering, death, hunger, and lack of access to health and education. While that has been in the statements of Varoufakis and the Greek government, it’s not clear to me that has been the main message.

Polls suggest the German public remains firmly on the side of the Merkel government in taking a hard line.  What messages, if any, would convince them to take a different view? Rationalists would likely say if Germany saw its own self-interest at stake in the outcome, then this could potentially move both elites and the mass public. Joseph Stiglitz made just such the case on Twitter:

Stiglitz: Preventing Grexit will take Angela Merkel to say “we don’t want to be blamed for destroying Europe for the 3rd time in 101 years.”

That may be in this case what’s necessary to convince the public that the costs are worth bearing. What about non-material arguments, moral arguments, ideational or emotional appeals? My own work suggests moral arguments can play a role up to a point, but this becomes more difficult the costlier the associated action and certainly Germany and European support for Greece is costly action (though it may be relatively more cost effective to support Greece now than face the consequences of Grexit later).

Let’s say that moral argumentation has some role to play in convincing Germans and Europeans to care about Greece. Framing continued or enhanced financial austerity as akin to torture may be too antagonistic, leading the Germans and Europeans to reject the concerns out of hand.  The literature on framing from Acharya and others suggests the need to identify locally resonant messages that will appeal to target audiences. From my reading on the negotiations over Greece’s debt, Syriza hasn’t done nearly enough to appeal to the hearts and minds of the international public generally and the German public specifically to create more support for what is arguably both morally and pragmatically right. At the moment, if Germany ultimately commits to more debt relief to Greece, it will be with a headwind rather than with a neutral or supportive public. 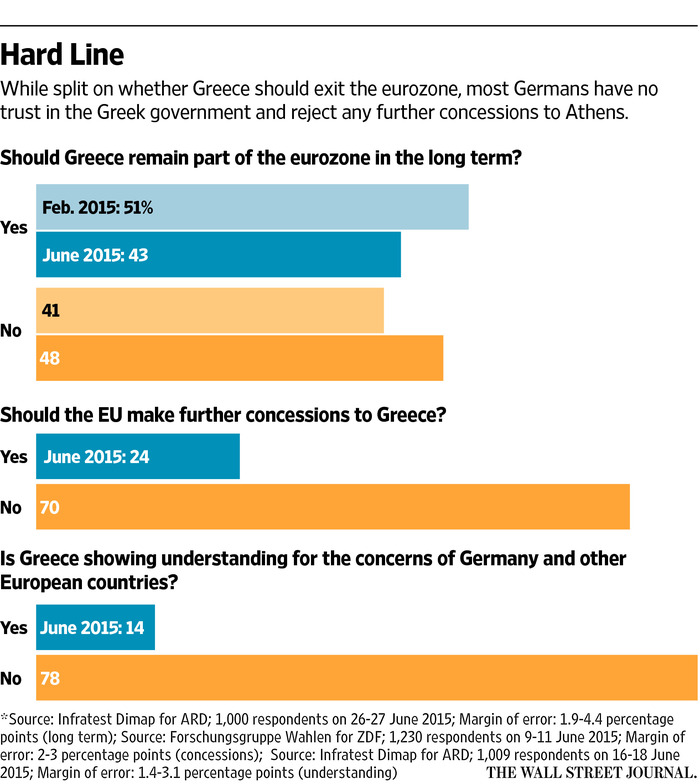 * If you accept Mark Blyth’s recent piece in Foreign Affairs, this whole situation is not really about Greece but about bailing out big European banks in France and Germany in particular. From this perspective, strategic framing and messaging might be totally irrelevant, but there you go…