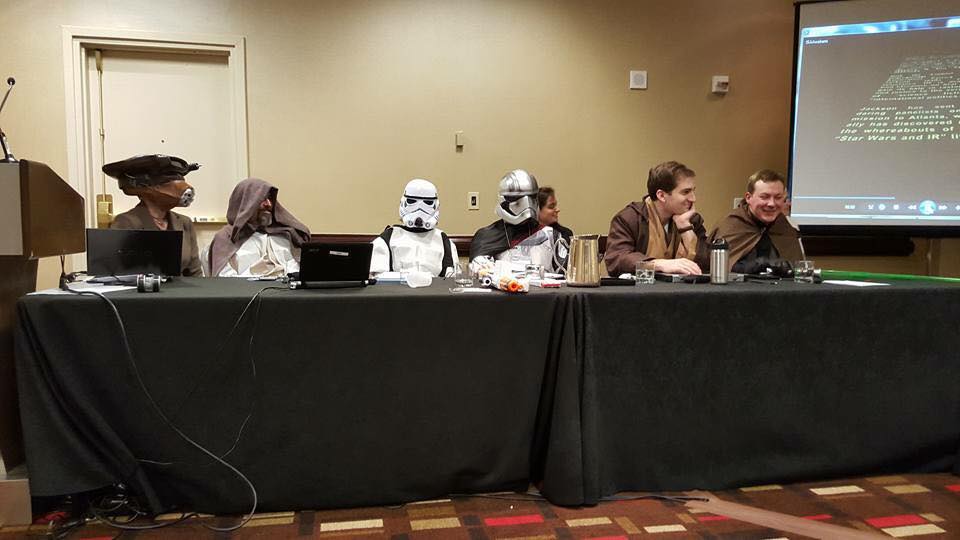 An argument broke out about this question after the “Star Wars and International Security” panel at ISA this month. A few people on Twitter and PSRM (or so rumors have it) say dressing up renders pop culture research more marginal than it already is. I suppose a TRIP survey could more conclusively answer the question about trends in the discipline.

Personally, I’d love to see that survey, since my new article in Perspectives is all about science fiction and global politics, so I have skin in the game of “taking pop culture research seriously.” In fact, perhaps we can conduct a natural experiment on this question by simply tracking citations / responses to this piece, which is the exact same piece I presented on the Star Wars panel while dressed as Princess Leia, and comparing them to my other work. If doubters are right, this will be one of my most marginalized papers ever and in fact will adversely affect my standing in the discipline (and perhaps the standing of pop culture research generally).

Ha! I doubt that will happen. I have no TRIP surveys under my belt, but my anecdotal experience says the opposite is true: dressing up to present pop culture research has no negative effect on people’s impression of pop culture research or researchers in IR. Rather, the ability to do so is an indicator of the reverse: pop culture scholarship has hit the IR mainstream.

Here’s what I’ve observed over the past several years of doing this:

That said, none of this explains why panelists at ISA choose to dress up. No one I know is doing it for strategic reasons – we’re doing it for fun and because we can. I can’t imagine fewer people would come to a pop culture panel if there weren’t costumes – Iver Neumann and Nicholas Kiersey’s Battlestar Galactica panel four years ago was just as packed, with panelists in suits, as ours was this year. People come to these panels because the topics are interesting and the research is increasingly sophisticated and widely acclaimed. (For example, Neumann and Kiersey’s edited volume Battlestar Galactica and International Relations attracted attention  from Edward Olmos Himself after it was published. Multiple book publishers have approached me asking when the Game of Thrones or Star Wars edited volumes will be ready.)

As I argue in my new article, what matters most (and should matter most) in whether pop culture research gets taken seriously by scholars  is the quality of the research. Indeed, if there is anything that in the past has made pop-culture research seem less serious than it is, my bet is it’s not cosplay but the fact that some of the earlier research hasn’t really been research. Treatments of pop culture that have simply described political themes in cultural artifacts, or argued by assertion about enabling effects (without investigating them empirically) have perhaps made pop culture papers seem like little more than a fun diversion from serious social science.

But that is changing. Papers on both the ISA panels where I have dressed up included serious, methodologically sophisticated empirical work on the way that popular culture circulates in, gets deployed by and impacts real-world political actors. The Star Wars panel this ISA included Annette Stimmer‘s case study of Strategic Defense Initiative advocacy and counter-advocacy; Scott Brown‘s content analysis of Death Star imagery in media coverage securitizing the “China Threat”; and a critical discourse analysis of national security blog content by Brenna Bridwell, Benjamin Carbonetti and Corinne Tagliariana to examine “dark side” rhetoric and US strategies in the war on terror. (And an epic genealogical study by Patrick Thaddeus Jackson exploring what Star Wars tells us about the very category ‘science fiction’ – dig for his 50-pg treatise in the ISA archive or read the blog version here.) Like the Game of Thrones panel last year, the resulting conversations were not simply a pop-cultural nerd-fest but reflected serious epistemological and methodological concerns about how we study the impact of second order (fictional) representations on first order political processes.

So if anything, the fact that scholars across ranks feel increasingly comfortable dressing up for these panels at professional conferences signals that research on pop culture’s impact on global policy is mainstream enough now, that it’s possible to be taken seriously AND have a little fun. And that’s a good thing!