Trump and IR Theory: Did We Forget Great Men?

I was reminded on twitter that international relations professors have trained students for generations to focus on the third and second levels of analysis and dismiss the first–that individuals and their characteristics matter much less than the constraining impact of institutions and the incentives provided by the international system.

So, should we just apologize as Trump sells out the postWWII order and ends American hegemony by whim or fiat?  No, we need to drink heavily.  Seriously, there are a few real responses to this question of agency and structure.

First, realists will say, and mostly rightly so, that their main focus is not on what states do but on how the system punishes states.  That the security dilemma operates always–so attempts to improve security vis-a-vis China will only threaten China, producing a reaction by the Chinese that will leave the US worst off (Herz, Waltz).  I have no doubt this is going to play out.  The more recent realists added stuff to their theories so they can predict foreign policy better, but the strength of it was and is how the system produces dynamics that are enduring.  And they will endure during the Trump era, but his complete lack of awareness will mean that the tendencies of IR will be exacerbated, not mitigated or managed by the strongest player in the system (until the US is so weakened that it is not).
International institutionalists have been mostly right in that anarchy can be mitigated by cooperation, but cooperation is not easy.  Institutions endure and adapt because building new ones takes a lot of work.  So, an alliance built to deter the Soviet Union got in the business of peacekeeping, democratization (teaching civilian control of the military to Eastern Europe–one of the real boons of enlargement), counterinsurgency, and now back to deterring Russia.

Second, domestic institutionalist types (that would be me) would say that institutions tell us when individual personalities matter (Presidential systems, not coalition governments).  The problem with Trump for these folks is: he is unconstrained by institutions and owes no interest groups much fealty.  He violates norms and rules without much penalty, undermining the institutions.  He is rich (sort of) and has a cult of supporters.  And polarization has broken US institutions.  The Republican Party is so hostile to Obama and Clinton that they are supporting someone who might be an agent of Russia and who is definitely acting as if he will be drunk at the wheel of government, careening from one crisis to another.

To be fair, the international structure and domestic institutions had a good run–the US followed a relatively stable set of policies for over 70 years through Democratic and Republican Administrations.  But as social scientists we have to admit a couple of things.  First, individuals have agency.  We (IR types) most don’t like studying individuals (see Elizabeth Saunders as a timely exception) because it is easier to risk tautology and harder to make predictions.  Second, and relatedly, we might be better at getting outcomes right than intentions.  Third, Trump is, indeed, a black swan event–he had a low probability of success at first, he got empowered by a bunch of things in the primaries, won the general election due to a tainted opponent, a misguided media and much help from Russia.  And now he stands ready to gut American Foreign Policy, because, as we have long taught, whatever constraints there are on Presidents, they are weaker on foreign policy than domestic policy.  It is far easier to sell out to Russia than to end the Affordable Care Act.  That the GOP is so obsessed about the latter that they are willing to overlook the former speaks poorly of them.

So, did we mis-teach the kids for so long? Perhaps we could have played up the role of individuals a bit more, but mostly, I think we got it right.  And we will keep on getting it right–we may not be able to predict what Trump does (Trump’s razor tends to work–the dumbest policy is most likely), but we will get right the effects.  Hegemonic instability theory is going to become quite hip.

Update: I was pushed on twitter, where folks suggested there was plenty of first level analysis stuff, which returns me to TRIP data and to the class question of how much is a lot or little.  You make hte call (number and percentage of articles over thirty years that use first level of analyis–see TRIP codebook): 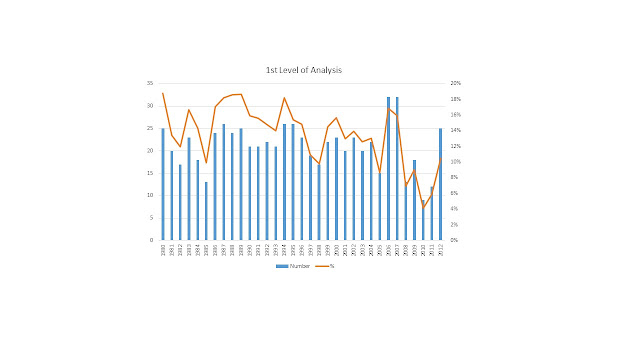