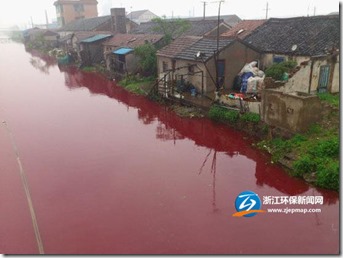 The following is a re-up of a piece I wrote for the Diplomat last month as part of an informal back-and-forth series with the National Interest this summer on the US pivot to Asia and AirSea Battle. (Here and here are some of the other entries.) That pic, which has got to be the grossest river in all China, is from here.

In brief, I increasingly think that ASB is a mistake, because it’s almost impossible to read it as anything other than hugely provocative from the Chinese point of view, no matter what we say to them about our peaceful intentions. (Read this, and tell me reasonable Chinese wouldn’t flip out.) It’s a classic example of the security dilemma, but as I argue below, I am not really convinced that we actually need this high-tech, super-fearsome-sounding ASB right up in their face. More generally though, the pivot to Asia – a sharpening of American attention on the region – is probably a good idea. China is vastly more influential on American life than Israel or Iran. But the Middle East and Islam activates belligerent American religiosity so much, that I doubt we’ll really be able to pivot. In any case, the essay follows the jump and is written in an op-ed style.

END_OF_DOCUMENT_TOKEN_TO_BE_REPLACED

Over at the National Interest T.X. Hamnes has a nice critique of AirSea Battle, seemingly the Pentagon’s reigning  strategy…sorry, operational concept…for dealing with a rising China and the problem of Anti-Access/Area Denial (for the official overview, see here).  I expect I’ll be writing a bit on ASB during my time at the Duck, so I won’t try to engage in every debate in the first post. For now I’ll limit myself to one question Hamnes raises: does it make any sense to talk about an operational concept as isolated from strategy?