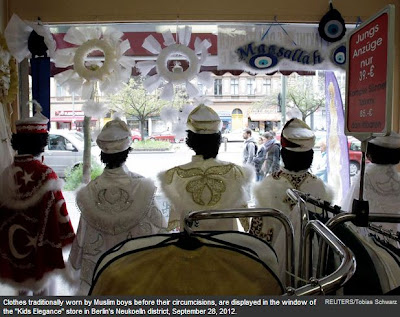 The German Justice Ministry has outlined a new draft law regulating the circumcision of children in that country, on the heels of a Cologne court’s decision that circumcision of non-consenting minors constituted a human rights violation.The decision, after a four-year-old Muslim boy experienced uncontrollable bleeding following his ritual circumcision, sparked a firestorm, with some child rights activists hailing the decisionand while Muslim and Jewish communities within Germany and abroad argued that the ruling constituted a violation of religious rights.
The new law must pass by at least a 2/3 majority in the Bundestag, and could still be challenged in Germany’s highest court. However given the ease with which efforts to outlaw circumcision have been struck down in other contexts, it would not be at all surprising if this ruling were rolled back. Indeed already religious communities in Germany have resumed preparations for circumcision ceremonies, the industry having slowed to a halt in the weeks after the Cologne decision as physicians feared criminal liability under the ruling.
This week I’m at the 12thInternational Symposium on Genital Autonomy in Helsinki Finland, where I’m conducting field research within the transnational movement to eradicate the practice of surgically altering female, male and intersex minors. From my vantage point here, the political significance of these developments in Germany will not simply be determined by whether or not the law passes. Rather, the Cologne ruling (and press coverage of it) has shifted the framing of the circumcision debate away from questions of health or gender equity and toward the tension between children’s bodily integrity rights and the rights of parents to religious freedom.
END_OF_DOCUMENT_TOKEN_TO_BE_REPLACED