WPTPN: Global Cities in a Time of Populist Nationalism

This World Politics in a Time of Populist Nationalism (WPTPN) guest post is written by Fiona B. Adamson, an Associate Professor of International Relations at SOAS, University of London.

In the aftermath of the UK Brexit vote, London Mayor Sadiq Khan and Paris Mayor Anne Hidalgo issued a joint letter committing themselves to work more closely together and to deepen connections between cities in Europe and across the world, declaring that “the 21st century belongs to cities.” They are not the only ones who think so – sociologists, geographers, urban studies scholars and others have long focused on cities as important sites of power in the international system – sites that increasingly make up a networked global structure that exists side-by-side with the system of nation-states.

The tension between the globalized world of interconnected cities and the still territorially-defined system of nation-states is one of the factors that has come to the fore in both Brexit and the US election. Voting preferences in both cases mirrored the rural-urban geographic divide – with urban centers overwhelmingly voting “Remain” in the UK and for Clinton in the US. Indeed, both the “Leave” and Trump campaigns played on this distinction. The Brexit vote was as much about perceptions of London’s “elites” and “experts” as it was about fact-based arguments or the actual workings of the European Union. Trump’s “America First” and “Make America Great Again” version of nationalism was pitted against the “globalism” of metropolitan elites – who were deemed to represent neoliberalism, mainstream media and corporate power – but also pluralism and cultural diversity.

END_OF_DOCUMENT_TOKEN_TO_BE_REPLACED

The Global Diffusion of Bikeshares (I) 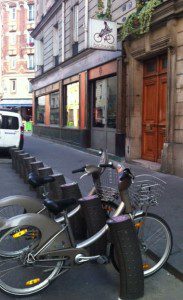 Editor’s Note: This started off as two bullet points, but it’s morphed into a surprisingly lengthy piece about Bikeshares.  Blame the easy availability of both picturesque bike rides and cheap wine in Western Europe.  This is the first installment; a second will follow.

At the age of 19, I moved to the Netherlands for a summer.  Like most tourists, I had read about the famous Dutch “white bikes,” a non-locked bike-sharing system that guidebooks were fond of presenting as proof of Dutch civic-mindedness.  The system was simple: see a white bike, take, use, leave wherever.  Of course, there was an alternative course of action, perhaps unforeseen by white bike planners: take, use, spray paint, keep.*  I never saw a white bike.  There are mixed reports on whether the system was ever particularly vibrant; by the 1990s, however, it was gone.**

In the mid-2000s, the solving of the enforcement issue allowed the birth of modern bikeshare systems in western Europe.  These systems relied on locking stations, credit card-secured rentals, and heavy step-through commuter bikes.  They now exist in major cities on five continents, and we’re inching toward exponential growth in both numbers of systems and riders.  Western Europe is increasingly saturated, and bikeshares are spreading to smaller towns, especially in France, Spain, and Italy. North America has been slow out of the gate, but there are established systems in DC, Boston, and Denver.  New York’s Citibikes are finally online. Los Angeles, Chicago, Miami, San Diego, and others should be up within the next year.  Though information on bikeshares outside the OECD is bikeshares is minimal, they do seem to be a truly global phenomenon. In Asia, Hangzhou currently has the world’s largest bikeshare with 66,500 bicycles, roughly 3 times the number of Paris’s Velib; Beijing’s currently has 14,000 with plans to expand. Several Indian cities have incipient bikeshares, as do cities in several Latin American countries.