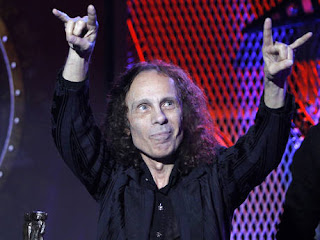 I am not a nerd. I have tried to make this abundantly clear. So what if I just watched 12 episodes of Battlestar Galactica in the last week? That doesn’t PROVE anything. But I haven’t always been a fan of period pieces and pro football. My anti-nerdishness in high school expressed itself much differently – I was a metalhead. Not one of those poofy-haired spandex-pants-wearing metalheads. If you wore a Poison shirt to school, I’d have shunned you. A Warrant shirt and I’d have kicked you in the balls. Metallica, Iron Maiden, Megadeth, Black Sabbath – those were my bands. I had the mullet to prove it.

Being a metalhead these days makes you feel very old. Van Halen is releasing their first album with David Lee Roth since 1984. His stage outfit now consists of overalls and a train conductor’s cap. The first single, Tattoo, is truly terrible. Live Fast, Die Young? Not quite. Maybe Live Fast, Die after First Collecting Social Security.

Why can’t Van Halen do what Motley Crüe is doing? Just let us relive our glory days by hearing our favorites. Shout at the Devil!!!!!! Motley Crüe is booked for a two-week residence in Las Vegas. I am serious. Nikki Sixx is now Tom Jones. Come to think of it, that is much sadder than recording new songs. For them. For us.

Or you could go the experimental, “staying young” route. Like Metallica’s album with Lou Reed. I am serious about that too. Critics have been afraid to say it because the IDEA is so cool. But it is worse than your neighbor’s kid’s band. A poor man’s Henry Rollins.

Being a metalhead these days also pisses you off. When I was in high school, metalheads were “freaks,” social pariahs. The only time we could see music videos of our favorite bands was if we stayed up until midnight and watched the “Headbanger’s Ball” on MTV on Saturday night. Otherwise it was all Belinda Carlisle, all the time.

But now it seems everyone was a metalhead. Everyone loves Ozzy. Besides the reality show, there is this car commercial featuring a middle-aged man singing Crazy Train with his kids and his wife in his minivan, like this was some guilty pleasure from everyone’s past. But it wasn’t; it is a guilty pleasure from OUR past. We didn’t like you and you didn’t like us. Don’t pretend otherwise. There were 1800 people in my high school and a total of 20 owned the “Blizzard of Ozz.” If you don’t know what that is, you have proved my point. Now go play your Duran Duran albums and get out of my face. NEEERRRRDDDDSSSSS!