The Chart That Explains Your World 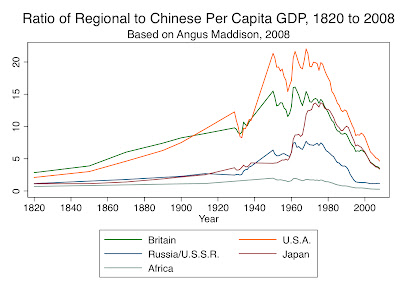 Everyone agrees China is a rising power. Some people think it can rise indefinitely; some people think its rise will decelerate; and some think that its rise is illusory. But it’s hard to put even the People’s Republic stellar growth rates into perspective without taking a longer view.

The chart above shows the ratios of Chinese to other countries’ GDP per capita. It’s based on painstaking work by Angus Maddison to reconstruct long time series about output. There are reasons to think that Maddison’s estimates before 1900 are a little speculative, but they are widely agreed to capture the broad picture fairly well.

Interpreting the chart is straightforward. The y-axis shows how many times richer each country or continent is than China. In 1960, for instance, the United States was about 20 times as rich per head as China, while Britain was about 15 times as rich and Japan and Russia about 8 times as rich. The chart is showing us, then, just how far behind the rest of the world China had slipped. And note that a lot of that is due to the early Communist regime; the Cultural Revolution and the Great Leap Forward are visible in the time trends as the post-World War II peaks in the ratios (since Chinese output fell dramatically as Western and Soviet output continued to rise).

Over the past 30 years, however, those ratios have plummeted. The United States and other developed countries are still much richer than China, but they are no longer vastly richer. Those falling ratios portend just how dramatic the shift in the global distribution of wealth, and of power, from the North Atlantic community will be.

Superpowers Are What We Make of Them 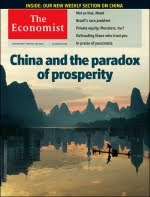 The Economist lead story this week on China’s Paradox of Prosperity offers some fascinating fodder for a lecture on constructivism:

“In this issue we launch a weekly section devoted to China. It is the first time since we began our detailed coverage of the United States in 1942 that we have singled out a country in this way. The principal reason is that China is now an economic superpower and is fast becoming a military force capable of unsettling America.”

What strikes me about this paragraph is the factual assertion that China is now a superpower. Perhaps I’ve been reading too much of Dan Drezner, but my first reaction was “really? Prove it.” Yet now that The Economist – a leading authoritative news source – has stated this, is it now “fact”? Are superpowers what we make of them?

The decline of American math and sciences?

One of the parents referred me to an article and data published last summer in Money magazine. A key finding:

As math and science talent accumulates abroad, companies do more of their hiring there, reducing demand in the U.S. That’s partly why undergraduate engineering majors are a shrinking proportion of the total, down from 6.8% to about 4.5% over the past 20 years. Employers then claim they can’t find engineers in the U.S. — so they have to hire abroad.

Another passage generated a sharp response from several parents:

The fastest-growing college majors in America as of 2007, says the U.S. Education Department, were parks, recreation, leisure, and fitness studies, as well as security and protective services.

Then this morning, Thomas Friedman’s column added another plug for the decline of American math and sciences in American education.

I’m certainly not pollyannaish on the state of math and science education in the United States. My 12-year-old son loves math and sciences but complains about “math limbo” at his school — as he puts it: “They keep lowering the bar and asking us to go under it.” OK, that may be a bit of pre-teen bravado speaking, but in the era of underfunded No Child Left Behind mandates, teachers are increasingly incentivised to teach to the state tests and discouraged from using a range of differentiated teaching techniques to meet a broad range of student interest and aptitudes.

But, my broader objection to this discussion and to the broader debate on relative decline, power transition, and the “rise of China and India,” is the failure to understand or examine the complexities and challenges that both China and India face. No one can dispute the extraordinary economic transitions and growth rates realized by China and India over the past twenty-five years. But most of the political discourse on power transition (and the lament of American decline) seems to assume linear trends over the next twenty-five to fifty years.

I’m not sure I see it that way. I co-edited a volume last year on China and it included interesting chapters by Iain Johnston and Sheena Chestnut from Harvard, by Susan Shirk from UCSD, by Cheng Li from Brookings, and by Kelly Sims Gallagher at Tufts among others, that all presented significant internal contradictions within China and questioned the viability and sustainability of current trend lines. With all due respect to the challenges facing the United States, both China and India face far greater obstacles in terms of internal political challenges and vulnerabilities, in terms of the relative disparities in the distribution of wealth, in terms of dealing with abject poverty, in terms of rural to urban migration and the subsequent social and cultural dislocations, as well as in terms of environmental degradation and resource scarcity. Given these challenges, I’m not sure I see China’s rise as inevitable — we may see it, but we may not….

All of this has implications for the more immediate discussion on the current state of American math and sciences. Prachi Patel has a nice summary of some of the contradictory indicators in last month’s issue of IEEE Spectrum Magazine (the flagship magazine of the leading professional organization for advanced technologies). She writes there remain significant quality gaps in the education standards in India and Chinese engineering programs. While students at the elite Chinese and Indian institutions graduate with skills on par with the top American students, these elite students account for only a fraction of the total graduates with these degrees:

Lower-tier colleges and universities in both India and China suffer from passive learning styles. Design and project work is typically absent, the curricula do not focus on problem solving or building project management and communication skills, and there are no internships or other work experience….

….[Vivek]Wadhwa [an executive in residence at Duke University’s engineering programming] adds that the quality of the educators is very poor, and there’s not enough depth or funding. The main problem, though, is the sheer mass of students enrolled in engineering classes. ”When you have 100 students per teacher, you really can’t get hands-on and be interactive,” he says.

The result is that most of the engineering graduates in these countries are not landing jobs nor are they fundamentally transforming their societies at the expense of the United States. I understand the instrumental claims, but we (especially Thomas Friedman) invoke(s) national security imperatives for everything these days. We should be able to discuss and address the current problems and weaknesses of math and science education in the United States without the constant drum beat of power transitions and interstate competition — especially when the analytic claims are so dubious.