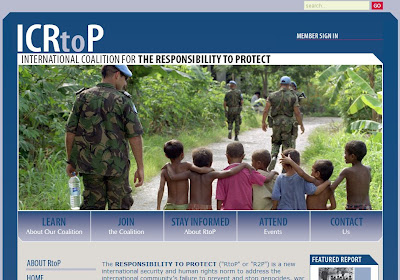 The banner image of the ICRtoP (International Coalition for the Responsibility to Protect) website  features a photo of seven boys under the protective gaze of a UN peacekeeper as he carries his bottled water, while other soldiers patrol ahead on the pathway that they all share together. From a structural perspective, the image is compelling because it situates the viewer as the rear-guard of the mission.

Unfortunately, there is absolutely no context provided for this image on the ICRtoP website — not even a photo credit [there is a photocredit on the “contact us” page].

Nevertheless, there are several details about the photo and the context in which it was taken that I believe are worth mentioning: First, the photo was taken by Eskinder Debebe on March 1, 2000 in the Becora district of Dili, East Timor. All of the adults in the photo are Portuguese soldiers supporting the UNTAET (UN Transitional Administration in East Timor) mission; there are no Timorese adults in the photo.  Second, although all of the soldiers on this mission were armed, there are no visible weapons on the soldier standing closest to the children. One might notice the handle of an assault rifle on the soldier ahead on the path in front of the children, if one examined the photo very carefully, but weapons are clearly not foregrounded in this image. In fact, the soldiers are wearing berets and baseball caps rather than helmets, again creating the image of paternal protection without reference to the violence that may accompany humanitarian intervention by foreign forces. Third, while Debebe took several other photos on this day for the UN, including photos of one of the Portuguese soldiers who is clearly of African (and/or possibly Brazilian) descent — that soldier is not visible in this image. Fourth, there were other photos of these children interacting with the soldiers, but this was the only one in which all of the boys are clothed. Fifth and related to the previous point, there are no buildings from the surrounding impoverished village, making it easier to focus on the lives of the children saved by the presence of these troops rather than the monumental and prolonged task of rebuilding and developing this area. Finally, there is no hint of the complex colonial and neo-colonial history of East Timor or the political maneuvering by regional powers that led to UNSC Resolution 1264 which brought the peacekeepers to Dili. Without careful research one would not even suspect that the soldiers are from the former colonial power in this region. In fact, there is no hint of politics at all in this pleasant scene; power is masked through paternal benevolence.

One might suppose that the selection of this particular photo as the banner image is just a fluke, but the same photo is also used as the cover image in the ICRtoP’s latest report — again without any attribution or context.  In fact, the same image is now used on over 200 websites.  The preference for this 11 year old photo — particularly for a website that discusses current interventions justified on the grounds of R2P is peculiar to say the least.

In the absence of any context, the image becomes an abstraction; it is an image of European soldiers, acting in the name of the international community and benevolently protecting a group of happy but poor, brown children in some nameless tropical locale. In other words, this is the new portrait of the white man’s burden.