Tweets of the week #4

This was another busy week in global politics and I’m going to highlight some of the best tweets in my Twitter feed. Before starting, however, I will acknowledge that this post is late.

I believe my excuse is pretty good as it involves lots of late night baseball. I grew up in Kansas rooting for the local team — and the Kansas City Royals are in the playoffs for the first time since winning the World Series in 1985. Tuesday, Thursday, and Friday, the Royals won three consecutive extra inning games. All ended after 1 am Eastern Time. I then had to read for 30 to 45 minutes after the long and exciting games just to unwind enough to sleep.

None of those victories featured  the longest game of the week. As DC residents know, the Washington Nationals lost to the San Francisco Giants 2-1 in the 18th inning. I caught a bit of that contest:

END_OF_DOCUMENT_TOKEN_TO_BE_REPLACED

At the request of the US Secret Service, Facebook has removed this poll from its site: 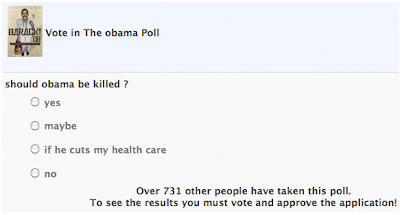 According to ABCNews, the Secret Service is investigating the creator of the poll “to determine intent.” But if the goal is to identify threats to the President rather than police hate speech, wouldn’t it be more logical (and easier) to go after those who voted “yes,” “maybe” or “if…”?