Oh, goody! Another round of “is America an Empire?” in the academic blogsphere. Our path begins with Adloyda’s criticism of Linda Colley’s appearance on the BBC and her essay in the Guardian called “The US is now rediscovering the pitfalls of aspirational imperialism.” Colley, whose book Captives : Britain, Empire, and the World, 1600-1850 is a great read, makes the standard arguments about the existence of a US informal empire created by its basing agreements, security relations, and economic influence (see, for example, Chalmers Johnson’s Blowback: The Cost and Consequences of American Empire and any number of books in the “American Empire Project” series).

Chris Betram follows up with the important point that some of the debate about American Empire pivots on a singular instance of historical amnesia. Many of those who reject the existence of a contemporary informal American Empire insist that the US could never be an empire because of its anti-imperial ideology of freedom, liberty, self-determination, and puppies for everyone. They forget, of course, that the United States’ history is riddled with imperial expansion:

if the expansion of China and Russia via a process of subjugation of native peoples and colonial settlement is a bona fide instance of empire and imperialism then so must be the expansion of the United States across the North American continent in the 18th and 19th centuries. It too involved the subjugation of native peoples and the projection of settlers and the eventual incorporation of the newly colonized territory within the expanding state. Of course, a little bit of selective amnesia and pretence can avoid the acknowledgement that, just like Britain and France, American too was a classically imperial power, just one that, in the end, was more successful.

This doesn’t sit well with a certain American self-image: one that sees the United States as somehow different from other powers, as not, historically, imperialist or colonialist at all. And that isn’t an image that is restricted to the right, it also occupies the thoughts of American liberals who believe that there is a danger of the US becoming something that, historically, it wasn’t and thereby somehow betraying its original ideals. But like their opponents, those liberals have bought into a myth. If China and Russia both were and are imperial powers, then, by exactly the same token, so was and is the US.

Over at Lawyers, Guns and Money, Robert Farley riffs on the general weirdness of the “United States cannot be an empire” claim.

Chris Bertram reminds us that contemporary discussions of American imperialism miss out on the fact that the United States has historically been a very successful imperial power. It’s not as if we just pulled 37 new states out of our collective ass The conquest and colonization of the West was so extraordinarily successful that modern Americans simply don’t think of it as a conquest in the same way that we think of Russian expansion, Chinese expansion, or European colonialism.

Of course, “exceptionalism” doesn’t require one to claim that “American Empire” is an oxymoron. In the eighteenth and nineteenth century, American Exceptionalism provided an ideological justification for empire.

The United States, the argument went, was a different kind of empire: an “Empire of Liberty” based on freedom rather than domination. Its manifest destiny might, of course, require the conquest and destruction of barbarism and tyranny… but this was all in the name of human progress and divine providence (I’ve blogged on one variant of this argument before).

The comments on Betram’s post are quite fascinating. For one, the pull to discuss contemporary “American Empire” (or the lack thereof) is clearly quite powerful, as the debate has quickly devolved into precisely that issue. For another, the amount of nonsense being offered up by otherwise thoughtful people is staggering. Many just can’t stomach the notion that the US was built through imperial expansion.

I wrote a fairly long comment on the subject, which I present here in an edited and expanded version.

I’ve already blogged at length on the subject of how to define empires. In my own work, my blog commentary, and in discussions with colleagues I keep on coming back to a few key points:

• “Empire” and “imperialism” are distinctive concepts. “Empire” describes a form of political control involving (1) heterogeneous subordinate political communities, (2) rule through intermediaries who enjoy significant-but not unlimited-lattitude over rule-making and enforcement within a subordinate political community, and (3) a core-periphery structure characterized by limited political ties between peripheries. “Imperialism,” on the other hand, is a strategy of expansion involving the subordination of previously independent political communities for the purpose of extracting resources from those communities (land, raw materials, tax revenue, military manpower, strategic position, and so forth). Colonialism is a particular form of imperialism that involves settling populations from the core in peripheries – or elsewhere in the empire, often from “inner peripheries” such as, in the British case, Scotland and Ireland.

• The political structure of relations – both domestic and international – may have emergent qualities. This is particularly salient in the context of putative informal empires, where a state may never engage in “imperialism” but nonetheless ultimately wind up in a relationship which has imperial elements. A state may engage in imperial expansion but ultimately form a political order that looks, on balance, more federal, confederal, or nation-state in character.

• Informal empires, as international-relations scholars such as David Lake, Alex Wendt and Daniel Friedhiem, and others argue, are extremely difficult to detect. This is particularly true when we ask whether a relationship is hegemonic or informal-imperial (the two ideal types are very similar) Often, we only know an informal empire when we see “off-the-path” behavior, i.e., when a subordinate polity departs from implicit rules and suffers from highly asymmetric coercive sanction. Lake uses the example of US intervention in the Carribean Basin, which is a rather good one.

What are the implications of these points for the more general issue of American Empire?

To begin with, successful imperialism always leads to imperial forms of rule… but the imperial relations may prove transitional. Empires sometimes voluntarily or involuntarily relinquish control over a subordinated political community. They may evolve into confederal or federal arrangements, or even into nation-states.

Most of the major European monarchies, for example, passed through various stages of imperial control as they expanded their territories in Europe. In the end, this process sometimes culminated in reasonably successful consolidation of a nation-state (think of France’s relationship to Burgundy, Provence, or Aquitaine). Sometimes the result has been a rather tendentious mixture of confederacy and nation-state (think of Spain’s relationship to Catalonia, Valencia, and the Basque region). Other times, the resulting political community has been through fragmentation, reconstitution, and renewed fragmentation (think of Russia’s relationship with Ukraine, Georgia, and Lithuania).

Thus, it shouldn’t be all that hard to understand that American westward expansion was imperial and colonial in character, even if the current form is now more federative than imperial – with the possible exception of the complicated governance arrangements between the Federal Government and Amerindian territories. Similarly, the US did opt for empire after the Spanish American War in a number of places, such as the Philippines and Puerto Rico. It did so again after World War II with respect to a number of Pacific islands. The fact that it has subsequently abandoned formal empire in most of those places doesn’t change the imperial character of its past control over them.

That, I think, should be relatively incontroversial. But let me take this a step farther: as long as the US occupied Germany and Japan it had an imperial relationship with them. 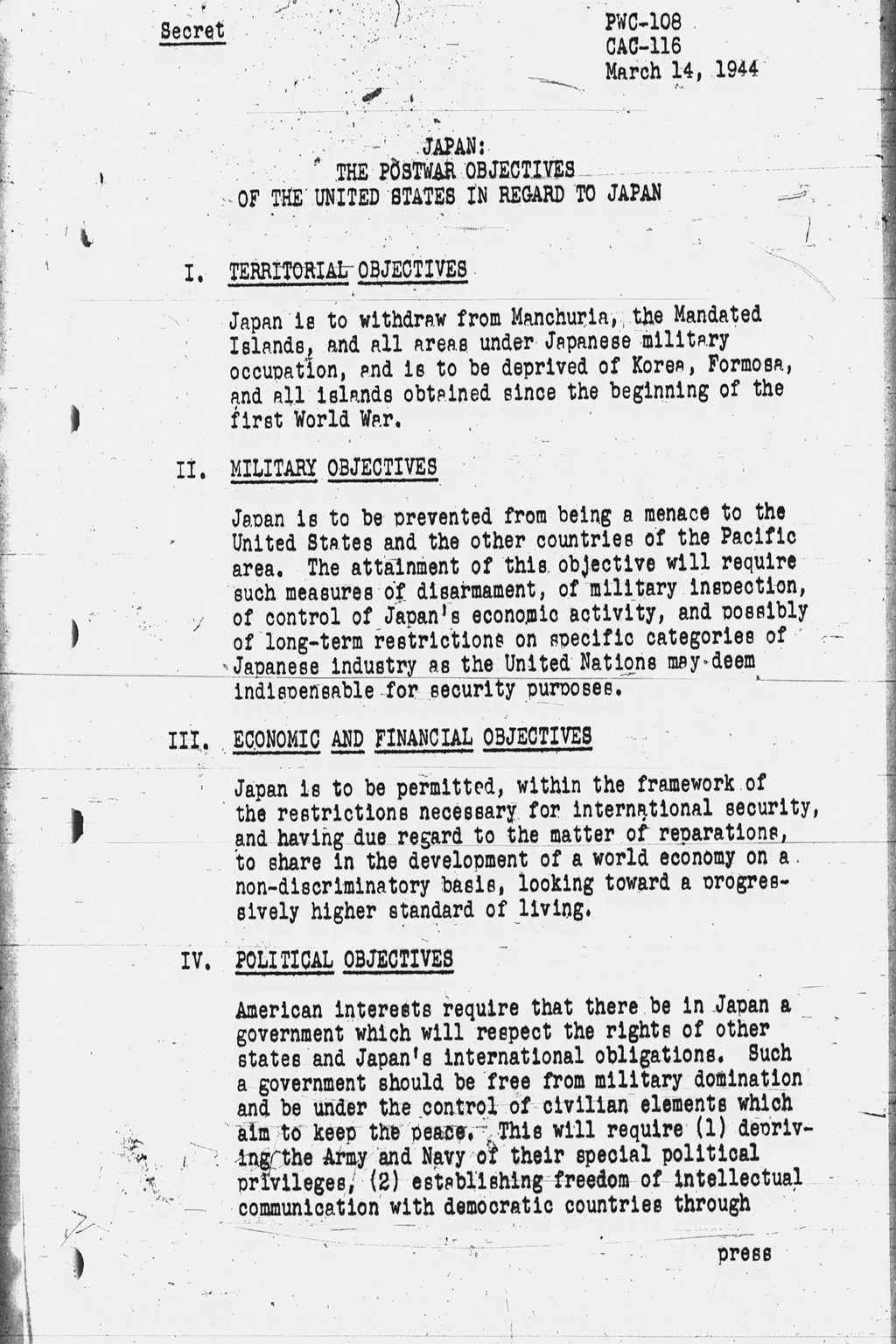 The fact that the US had no intention of retaining formal imperial control over the defeated Axis powers means that its strategy for dealing with them can’t be described as “imperialist,” but it doesn’t deny that, for at least this period, the United States maintained an imperial relationship with them. During the early phases of the Cold War, I also happen to think it would be accurate to describe the relationship as one of “informal empire,” although that term becomes less and less appropriate as we move towards the present day.

The question, of course, is why the US did not adopt an imperialist strategy towards Europe and (most of) Asia after World War II, and why it generally abandoned its earlier attempts at empire building. One answer, suggested by the debate over at Crooked Timber, is the “exceptionalist” character of the United States as an avowedly anti-imperialist polity. But another is that we’re looking at a particular conjunction of circumstances and interests that, while somewhat unique to the United States, suggests very little that is inherently different about America. Some, for example, contend that the US:

1) Didn’t need to establish formal imperial control over Western Europe because it didn’t need to be as worried as the Soviet Union was about defection from its security architecture;
2) Realized before a lot of other polities did that the “empire game” wasn’t worth the candle, i.e., that nationalism, Cold War competition (eventually), and other factors made empires – particularly formal ones – too costly to maintain;
3) Had a particular configuration of domestic interests that made abandonment of formal empire relatively politically expedient when compared with, say, that of Belgium or the Netherlands.

My own sense is that all of these factors are at work, in that US political culture certainly shaped all three “interest-based” processes.

All of this also has implications for the debate over American “informal empire.” Many of the same factors discussed above make “informal empire” adaptive in the context of current international normative, economic, and political conditions. Whether or not the US adopts “imperialist” policies is interesting, but not determinative with respect to the debate about an “American Empire.” It also follows that relations with Europe are a terrible place to look if one wants to make the case for Empire. Colley is simply wrong to treat the UK as a client of the United States, for example, On the other hand, US relations with Iraq and Afghanistan do have an imperial character. Even though US aims aren’t easily described as “imperialist” (leftist argument aside), it is pretty hard to argue that the relationship as it currently stands doesn’t involve aspects of indirect rule. Somewhere inbetween we find relations with states such as Pakistan and those in Central America. I don’t have an answer to how to characterize those relationships, but there’s a lot to be said on either side of the debate.

And my own (with Thomas Wright) working paper (PDF) on the subject. The usual applies: comments welcome, do not cite without my permission, and the version is a bit dated.