The New York Times published today a chart obtained from a classified military briefing that shows how the US military is measuring Iraq and charting its descent toward chaos. 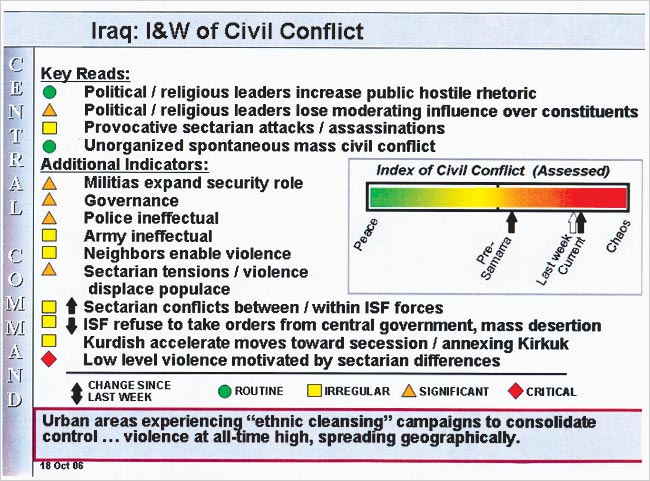 This chart is fascinating on so many levels.

The first is the most obvious. The US military paints a bad and worsening picture of sectarian violence in Iraq. Quite disturbing, actually. Moreover, this is not new– they have been monitoring this for some time. The article reports that:

According to a Central Command official, the index on civil strife has been a staple of internal command briefings for most of this year. The analysis was prepared by the command’s intelligence directorate, which is overseen by Brig. Gen. John M. Custer.

Of secondary interest is the methodology. This chart presents several indicators giving a descriptive picture of what the military is monitoring in Iraq. These are items that military intelligence in Iraq is keeping track of. Some are easy to “measure”– you can talk about incidents of violence, or number of times an ISF unit refuses to take orders. But some require much more ethnographic methods– like violence motivated by sectarian differences or governance. How is one to know the level of violence and from whence it originates? How is one to know the effectivenes of the police or army unless one goes on patrol with them, observes them in action, and reports an understanding of what just went on?

Of futher interest is how the military chooses to make sense of all this information. As anyone who has ever worked with the military knows, all important knowledge now exists in the form of briefings, and no briefing is complete unless it is chock full of overly-busy powerpoint.

Still, for a military culture that thrives on PowerPoint briefings, the shifting index was seen by some officials as a stark warning about the difficult course of events in Iraq, and mirrored growing concern by some military officers.

The concern is “real”–we’ve been briefed on it.

Now you’ve been briefed too.