China Launches a Bid (for hegemony)? 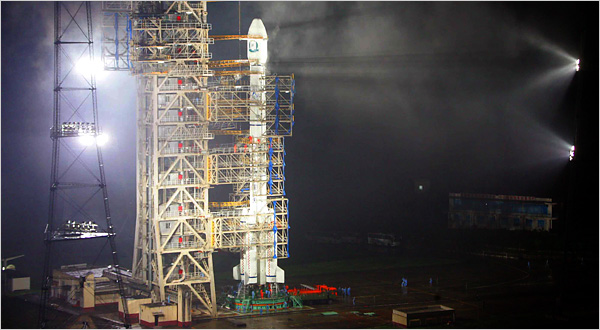 China is in the Satellite business.

The NYT reports that China is launching a communications satellite for Nigeria (pictured right).

The lead says it all:

For years, China has chafed at efforts by the United States to exclude it from full membership in the world’s elite space club. So lately China seems to have hit on a solution: create a new club.

Beijing is trying to position itself as a space benefactor to the developing world — the same countries, in some cases, whose natural resources China covets here on earth. The latest and most prominent example came last week when China launched a communications satellite for Nigeria, a major oil producer, in a project that serves as a tidy case study of how space has become another arena where China is trying to exert its soft power.

This past semester, in my Hegemony and US Foreign Policy class, we talked about China often–usually in terms of a ‘hegemonic challenger.’ One of the point that we often noted, however, was that a hegemonic challenger must do two things: 1) overthrow the old hegemonic order, in this case, knock the US off its block as teh global #1, and 2) replace it with a new hegemonic order. In most of our discussions, we concluded China not really keen on either–instead treating the US as a rival (as opposed to an enemy) and looking to improve its own position within the system, as China now benefits tremendously from certain aspects of the current US order–especially in areas such as trade.

The key line in the lead is “form its own club.” Space has long been seen as a global commons, one where the US can provide certain public goods (such as satellite communication and navigation) and exercise its Command of the Commons as a foundational aspect of US Hegemony. Here you have not just China challenging that US order, but starting its own club for other states with similar interests.

You also see the invocation of “Soft Power.” I must admit, we read a lot of Nye in the class (probably second only to Ikenberry on the syllabus) and his work was popular with the students. The notion of Soft Power as a tool for hegemonic management is the heart of Nye’s work–get them to like you and want what you want so you don’t have to force them to do what you need them to do–and here you have the NYT reading China in that light.

The second interesting thing is the impetus toward the move into space. What I found notable was that the NYT managed, in the span of 3 brief paragraphs, provide ample evidence for Constructivist, Liberal, and Realist explanations of this launch:

For China, the strategy is a blend of self-interest, broader diplomacy and, from a business standpoint, an effective way to break into the satellite market. Satellites have become status symbols and technological necessities for many countries that want an ownership stake in the digital world dominated by the West, analysts say….

China’s more grandiose space goals, which include building a Mars probe and, eventually, putting an astronaut on the moon, are based on an American blueprint in which space exploration enhances national prestige and advances technological development. But Beijing also is focused on competing in the $100 billion commercial satellite industry….

Satellites also are becoming vital to Beijing’s domestic development plans. In the next several years, China could launch as many as 100 satellites to help deliver television to rural areas, create a digital navigational network, facilitate scientific research and improve mapping and weather monitoring. Research centers on microsatellites have opened in Beijing, Shanghai and Harbin, and a new launching center is under construction in Hainan Province….

But China’s focus on satellites has also brought suspicions, particularly from the United States, since most satellites are “dual use” technologies, capable of civilian and military applications. Currently, China is overhauling its military in a modernization drive focused, in part, on developing the capacity to fight a “high tech” war.

All that from one fun picture.