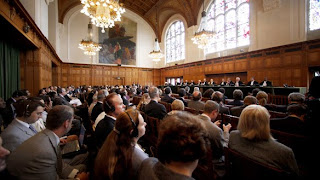 Just in case you were in suspense, the ICJ has declared that Kosovo’s declaration of independence to be legal. Unsurprisingly, the Kosovars are happy, the Serbs are not happy and countries with independence movements are probably a bit more nervous. As the Guardian reports:

The ruling is expected to have profound ramifications on the wider international stage, bolstering demands for recognition by territories as diverse as Northern Cyprus, Somaliland, Nagorno-Karabakh, South Ossetia, Abkhazia and Transnistria.

Still, it was unlikely that a negative ruling would have meant the end of such movements either.

I’d link to the ruling, but I think the website is being hammered by international justice junkies.

So based off my earlier blog post, the Court has effectively confirmed (albeit in a non-binding opinion) a fait acompli. The real tangible benefit for Kosovo now is that it will probably be much more palatable for more countries to recognize it as a member of the international community. (Although whether or not it will change the minds of the Russians is another story.)

Just one final thought – the news reports on the decision have stated that the court has determined that there is nothing in international law which prevents a declaration of independence. It will be interesting to see (once their servers stop being hammered) if they do say anything about the peer-recognition of other states as well. Although this may be getting too far from the original question before the Court.