Punishment Over Peace?: Gaddafi in a Post-Amnesty World 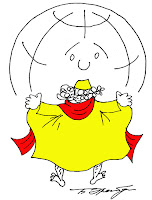 It has been five months since protests in Tripoli sparked widespread ‘civil unrest’/war, a NATO enforced no fly zone, and partial (and unclear) international interventions. Rough death toll figures range from 10,000-30,000. Perhaps the biggest uncertainty is how this will all end. While there is some hope that rebel forces will tip the balance of power, Gaddafi’s forces are strong and have made recent advances.
One possibility that hasn’t been readily considered is the potential benefit of granting Gaddafi amnesty in exchange for a peaceful end to the civil unrest. So why isn’t amnesty being seriously considered by the international community?
There are multiple possible answers; however it is worth considering Libya as part of a ‘post-amnesty’ international justice agenda focused on prosecution. It seems that transitional justice has become a norm, based on the assumption that ‘true peace’ cannot be sustained without justice. I’m not arguing amnesty is the best option- but it is worth thinking about why amnesty has increasingly become an international taboo.

When put in a broader historical context, the current situation in Libya might be seen as a typical example of when amnesty should be considered. Yasmeen Naqvi explains that “amnesties for war crimes and other international crimes come into being mainly when states are going through periods of transition, often from war to peace, and of extreme political upheaval, for example, the handing over of power from military regimes to democratic civilian governments.”
Amnesties used to be more common, they were seen as a accepted part of peace negotiations, and a worthy compromise between the desire for peace and reconciliation and the desire to seek justice and retribution.
Since the end of World War II well over 420 amnesties have been introduced as mechanisms for achieving peace, with recent examples including provisions within the peace negotiations in Sudan in 1997, the 1999 Lusaka Ceasefire Agreement in the Democratic Republic of Congo, and both the Abuja and the Lome Peace Accords in Sierra Leone in 1996 and 2001.
Arguments in favor of amnesty have included the claim that, in many cases of war, peace could never be attained without amnesty (check out Michael Sharf’s work for more on this).
The principle of amnesty is even enshrined in international law, with Article 6(5) of the Additional Protocol II of the Geneva Conventions stating, “[a]t the end of hostilities, the authorities in power shall endeavor to grant the broadest possible amnesyt to persons who have participated in the armed conflict.”
Despite the historical precedence of its use, amnesty has increasingly come under criticism; it is now seen as fundamentally add odds with, and detracting from human rights and international law. But history tells us that amnesty has a place in ending violence. Might it be worth setting aside our desire to punish and set judicial examples in order to allow for a re-examination of the value of amnesty….in the name of peace?