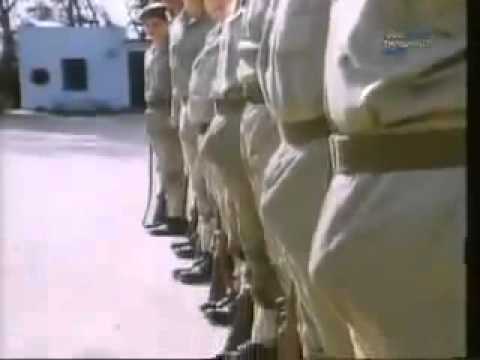 In the follow up to Defense Secretary Ash Carter’s  recent announcement that all combat jobs will be open to women, there have been several articles highlighting men’s fears about working with women on the frontline. In particular, a survey of Special Operations men found that the majority would prefer not to work with women, and that some held serious “fears” and “concerns”- especially in relation to women’s apparently unpredictable bodies. That’s right, the Special Forces-  the tip of the spear, the elite of the US military- are scared about the three P’s: periods, pregnancy and PMS. Most of these discussions pit women’s unpredictable, leaky, and fragile bodies against men’s stable, solid, and predictable ones. But is that true? Well, if folks want to take the debate to this level, its worth considering what science tells us about  men’s creaky, leaky, fluctuating and hormonal bodies and how this might impact their combat readiness.
So, I’ve compiles a list of 3 ways men’s bodies might be a liability in combat. It starts with- you guessed it- unexpected erections (bet you didn’t expect to see that arrangement of words in an IR blog post today).

1. Unexpected Erections: Did you know that men, on average, get 11 erections a day? That can be a serious physical liability in an intense combat situation. If we are going to talk about unexpected pregnancy or women’s PMS, we should talk about men’s boners too. Sounds silly? Well, it is actually a serious consideration. It should be noted that erections aren’t just about sexual arousal, many men experience “reflex erections, which can happen when a man is nervous, scared, angry, or under stress.” Sounds like a definite combat liability- particularly with younger male troops. Also, men can get unexpected erections due to the need to urinate, which can be a reality for soldiers travelling or in action in the field. All these fears about women ‘holding it’ and getting bladder infections in combat  might be nothing compared to the risk of men ‘holding it’ and getting an erection. I’ll spare you all the jokes about negligent discharge (ok I won’t), but in all seriousness, we need to ask if men’s unexpected erections put troops at risk.

2. Testosterone is unpredictable and fathers loose it rapidly: Many opponents of women in combat point to the role of testosterone in providing men with an edge when it comes to aggression, bravery, fearlessness, physical strength and other attributes that are presumed to be essential in combat. Conversely, women’s lack of testosterone and ‘excessive’ estrogen has been attributed with women’s apparent nurturing, risk averse, and weak nature. But such characterisations assume that testosterone is dependable and expresses itself the same way in each ‘man’ (we’ll leave aside for the moment, the broader assumptions about biology, bodies, and gender here and how trans* and non-conforming bodies are erased in this type of discussion). The truth is testosterone fluctuates significantly over the course of an average man’s life and declines steadily with age. Moreover, men who have kids experience a decline in testosterone that is nearly double the ‘normal’ rate of childless men. Another study concluded that “dad’s brain looks like mom’s” as the result of hormonal and emotional shifts that come with fatherhood. This begs the question: can fathers really perform as soldiers or will their fluctuating hormones and emotions get in the way?

3. Men think about sex too much to focus on combat: You’ve probably heard that men think about sex every 7 seconds? According to research this is an exaggeration. However, the average man thinks about sex 19 times per day. True, even trying to talk about “the average man” or the impact of him thinking of sex might be sexist/heteronormative and may reify an ideal about men’s bodies that is destructive and exclusionary. But since the Washington Post has chosen to list quotes from Special Ops expressing concerns about PMS, including: “Acting on emotions may be a problem. Judgment may be altered. The effects of combat may have a different impact during those times, I’m not sure” and “I think PMS is terrible, possibly the worst. I cannot stand my wife for about a week out of the month for every month. I like that I can come to work and not have to deal with that” then I think the door is wide open to talk about men’s capacity to focus on combat operations when they are so distracted by sex. If we assume that women are overcome with their mothering roles or disabled by regular hormones perhaps we should consider evidence about how thoughts of sex might also distract men and result in reduced combat readiness.

The Washington Post, Huffington Post, and other major news outlet’s decision to give air time to Special Forces’ list of concerns regarding women’s bodies (as well as concerns about how their wives would feel about them working with women) reflects embedded sexism within the US military and the media outlets that cover it. Why indulge a small number of men’s unfounded fears about working with women?

Worries about women’s bodies are rarely based on science or evidence. More often, such concerns are emotional reactions that are code for ‘we just don’t want them there.’

In a fantastic post, “The Military’s Elite Soldiers are Afraid of Women’s Periods,” Tracy Clark-Flory noted that science tells us there is *not* a link between women’s cycles and ‘moodiness’ or weakness. She includes the following quote from a large study on PMS: “These studies failed to provide clear evidence in support of the existence of a specific premenstrual negative mood syndrome in the general population…This puzzlingly widespread belief needs challenging, as it perpetuates negative concepts linking female reproduction with negative emotionality.” Similarly, despite chatter about the costs and liability of women’s pregnancy in the military, research shows that when compared to the time lost for male disciplinary issues and drug or alcohol rehabilitation, “pregnancy is a wash.” And we haven’t even talked about the fact that almost half of women who served in Iraq and Afghanistan were sexually harassed, or that between 20-40% of female troops experience rape or attempted rape during their careers. Special Forces are worried about how their wives will react to them working in close proximity to women? Female service members have consistently had to worry about the probability of violence from their male comrades.

To the Special Forces, Washington Post, and opponents of women in combat who cling to ridiculous biological arguments I say, let’s have a discussion about hormones, bodies, and emotions. If you want to open the “PMS, period and pregnancy” door, I hope we can kick it open a little wider and talk about boners, wet dreams, plummeting testosterone, hernias, gender non-conformity, addiction, disciplinary action, rape, transitioning, and depression.