The Difference Between Feminist Politicians and Politicians with Breasts: a response to Naomi Wolf 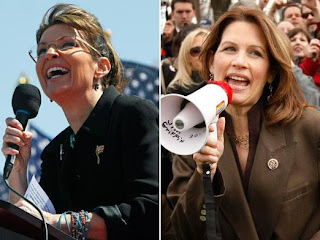 Naomi Wolf recently posted a blog on Al Jazeera entitled “America’s Reactionary Feminists: what do Palin and Bachmann have that make them so appealing to the American public?” I don’t doubt that this is an interesting question. Unfortunately, I was disappointed with the confusing and simplistic answer Wolf provided- particularly the discussion around right wing feminism.

It may be worth taking a step back to ask why female politicians who do not identify as feminists continually get categorized as one. Surely we must be beyond the ‘woman=feminist’ discussion? Sadly, apparently no.

First, the scoop on where Palin and Bachmann stand on feminism: Palin wasn’t a feminist, then she was. She changed her stance on the term and now identifies with it- largely equating the term with her ‘rogue’ approach to politics not her anti-abortion, anti-social safety net, and her support for cuts to the Family and Medical Leave Act. Bachmann has made it more clear that she is NOT a feminist; instead, calling herself pro-woman and pro-man (hmm).

Back to Wolf. Let’s just ignore her references to the two women as tigresses, soccer and hockey moms for now and get to her central argument, which is that there are two reasons Palin and Bachmann are attractive to American voters.

First, Wolf argues that these two candidates are able to project the same emotional populist demagoguery (her words, not mine) that other popular figures like Malcom X and Joe McCarthy did. Truthfully, I’m not sure where Wolf is going with this point- can we put Palin, Bachmann and Malcom X in the same category??- so I’m not going to dwell on it. Instead, I’ll focus on her second point, which is that their popularity is due to “a serious historical misreading of feminism.” She explains “Because feminism in the 1960s and 1970s was articulated via the institutions of the left…there is an assumption that feminism itself must be leftist. In fact, feminism is philosophically as much in harmony with conservative, and especially libertarian, values – and in some ways even more so.” She goes on to claim that “the core of feminism is individual choice and freedom, and it is these strains that are being sounded now more by the Tea Party movement than by the left” and that “even if they themselves would reject the feminist label. In the case of Palin – and especially that of Bachmann – we ignore the wide appeal of right-wing feminism at our peril.”

It is hard to know which feminism Wolf is talking about. Maybe liberal feminism- which does emphasize institutions, equality, quotas, and choice- but certainly the various black, radical, and Marxist feminist voices that were equally relevant- and more focused on labor exploitation, racial discrimination, marginalization, and recognizing difference- during this time weren’t necessarily focused on established institutions of the left or right. To say that the core of feminism is about individual choice and freedom also doesn’t reflect the diversity in feminist approaches and is as intangible and vapid as most other political generalizations about choice and freedom.

So how can Palin and Bachmann prove a wide appeal to right-wing feminism given that they don’t identify as feminists (at least not all the time) and the types of policies they support? Wolf seems to be making the leap to argue that the conservative politics that Palin and Bachmann share represents a new type of right wing feminism; however, feminism has been about eliminating gender inequalities, acknowledging difference, and radical change- the antithesis to the call for a return to ‘traditional values.’ There seems to be some ‘degrees of separation’ logic happening here: most feminism is political, most feminists are women, therefore political women must be feminists. Logic 101 would help identify the problem with this train of thought and point Wolf (and hopefully those who want to write about Palin and Bachmann together in the future) to the following conclusions: the only thing remotely feminist about these two is that they both have breasts.