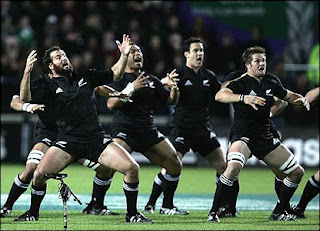 With the rugby world cup semi-final only a few days away, it would take something like a broken ship dumping tons of oil and chemicals onto the country’s beaches to get the country to talk anything besides the All Blacks… Wait… New Zealand is all about environmental protection, green energy, clean air (and funny guys like Jemaine Clement from Flight of the Concords) isn’t it? I mean, what is a ship with oil even doing near this environmental mecca?

Given that the country prides itself on its green and clean image, and given that there is an election in a month, you would think this would be a major story here. Yet, a week after a cargo ship loaded with oil and other toxic materials hit a reef off the cost of the North Island, most Kiwis are remain more fired up about the upcoming match between the All Blacks and the Australian Wallabies. No one seems to mind that the ship may break at any moment, or that it is dumping oil at a rate five times higher than originally projected. It took nearly a week before its major newspaper, the Dominion Post, featured the story on its cover (not a huge surprise considering that it recently featured a cover with two birds that collided mid-air and today is covering the story of a family that got lost in a corn maze in Massacusetts, of course). The gallons of oil dumping into the ocean and the apathetic media and public in New Zealand seems at odds with its lucrative 100% Pure tourism campaign.
Perhaps this is Peter Jackson’s fault with the Lord of the Rings, or perhaps its just because the country is do damn far from everywhere else that few people actual get to check the place out and see if the reality lives up to the hype/myth. Having lived here for almost two and a half years now I can say with confidence that there are three myths associated with New Zealand that are just fallacy.

The first myth is the most important for the moment. The myth here is that New Zealand is not only clean and pure- it is cleaner and more pure than most other places in the world.
By contrast to the stunning images of mountain ranges and untouched native bush and forest, an unfortunate reality is that New Zealand has increasingly relied on farming- especially diary farming- as a primary industry. This isn’t the kind of farming that involves a few dozen cattle crazing on pristine grass- it is a massive industrial, clear cutting, dirty industry.

Greenpeace New Zealand has directly attacked the 100% Pure campaign, focusing on the growing dairy industry in the country and its environmental impacts. 49% of emissions come from the agricultural sector- the growth of the sector has resulted in massive deforestation of native forest, the use of fertilizers and chemicals in the soil, and industries burn coal to process dairy milk powder for exportation- Fonterra (the largest dairy producer) alone burns 450,000 tonnes of coal per year. This combined with the gasses that the cattle themselves emit contributes to a massive environmental problem for a small country. Also, although NZ does use a great deal of wind power, there is evidence that wider environmental policies are relatively weak with WWF New Zealand recently criticizing the local Emissions Trading Scheme for making “further extensions of the loopholes in an already weakened and flawed scheme.”

As for the last two myths- I’ll leave those for now because as a Canadian living in Kiwi-land I’m not exactly objective. Sorry New Zealand. You are truly amazing- beautiful, slow, and isolated- but like many countries, your myths are preventing you from dealing with reality. When the rugby world cup hangover subsides the country will have to wake up and face a serious environmental disaster washing up on the North Shores.