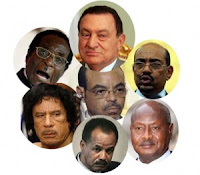 For all you fans of ‘Dictator Survivor: Africa,’ the forthcoming episode is sure to be the most dramatic one yet. Before this year, fans had gotten tired of some of the story lines and characters (I mean it seems obvious that Mugabe will win, so why bother watching right?), but this last season the producers have really intervened to make things more interesting.
Forget about Charles Tayor. Sure he was considered at one time to be the front runner in the dictatorship survival race- from the beginning he was named one of the Top Ten African Dictators of all time (no, really). He had it all: rebel forces in more than one country, massive diamond wealth, and illegal elections. Remember his bio episode when he talked about escaping from a US prison so he could return to rule the country? What about the shots of his election campaign where we learned that his slogan was ‘He Killed My Ma, He Killed my Pa, I’ll Vote for Him‘ (seriously). Even when Taylor was voted off, producers continued to pursue his story line. They brought in celebrity guests to spruce up ratings when audiences grew tired of his Special Court trial, which continues to drag on. Bringing in Naomi Campbell and Mia Farrow with the whole diamond drama was pure reality TV genius. Bitchy drama, big rocks= high ratings.
Then we had Hosni Mubarak- no one thought he would leave so soon and most assumed his sons would join the cast.
But the real story is Gaddafi…

What a spoiler! Most audience members were convinced that he and Mugabe had formed an alliance that would assure they remained the last dictators standing. However, a few weak efforts in the regular Survivor challenges (control of the media, for one) has left Gaddafi all but assured of losing his place. What will the producers do without Gaddafi? His sexy female guards, the speculation about his ever-changing hair and face (check out the before and after photos), the costumes that seemed part Bea Arthur from Golden Girls and part Jesus Christ Superstar…can the show go on without him? Luckily the producers are dragging his exit from the show out over several episodes. Recently, an element of humor has been added to the story line, with a key Gaddafi spokesperson being caught dressed as a woman trying to flee the country. Audiences have also been taken on a virtual roller coaster with teasers about Gaddafi’s location: he was getting on a South African plane, he was underground in a bunker, he fled to Niger, he’s at the Algerian border…what will happen in the real finale?
Stay tuned for the developments. If past seasons are any indication, even if Gaddafi is voted off it will likely be another few years before he gets his own spin-off series . Viewers will remember that Taylor was voted off in 2003 and didn’t get his series until 2006. This drama is now in the 6th season, with viewership dropping drastically after the Naomi Campbell episode.
So fans may need to stay committed for the long haul. Luckily, for Mugabe, all the diversion in attention has meant that he has crept even further in the Survivor lead, with more years, more financial ruin, and more human rights violations than ever. Unfortunately, he may outlast the show.