Friday “I Really Am Just a Nerd” Blogging

I was shocked, shocked to read Brian Rathbun’s characterization of me in a recent Canard as a “robot” who has only been posing as a Battlestar Galactica addict as part of my cover (!):

The academic and foreign policy worlds were rocked today by the news that Charli Carpenter — prolific academic, policy wonk, and mom — is in fact a robot. An anonymous source told this paper: “There were the academic writings, then all the policy work, the grant writing and management. She never missed her son’s soccer games though… it was just too much. Her makers made a mistake by not giving her any weaknesses.”

The revelation replaces the previous rumor among academics that Carpenter was actually an alien from the series Battlestar Galactica that she loves so much. That appears to have just been a hobby for the robot… Our CIA source said, “There is no room in this country for relentlessly hard-working academic robots raising well-adjusted families, no matter who it turns out they work for.”

This bit of yellow journalism, peppered with conjecture and misinformation, regurgitates a malicious leak from the alleged intelligence community without corroboration, and ill-befits a blogger of Rathbun’s caliber. The saddest part is that colleagues I know and love (to watch sci-fi with) have apparently taken these rumors at face value and are now doubting my status as a bona-fide nerd:

Friends were shocked, but not necessarily surprised. Dan Nexon, a professor at Georgetown University, said, “We always joked that Charli was a machine. She writes like a book a week. And good ones, too. Not the usual schlock we turn out.” He added, “She was always so good with technology. And she really likes science fiction. We all hoped she was just a nerd though. I guess we were fooling ourselves. I feel so betrayed.”

Well, to Dan and to anyone who has fallen victim to this conspiracy theory, I offer up the following as proof of both my humanity and my authentic nerd-dom:

1) Rathbun’s source is mistaken in claiming that I never miss a soccer game. In fact, I missed one in April 2011 to attend a panel on Zombies and International Relations and one the previous year to attend a panel on Battlestar Galactica, both at the yearly geek-fest known as the International Studies Association Annual Convention and both about as nerdy as one can get.

2) Rathbun erred in taking Dan’s statement that I write “good” books (that is, serious works of political science) every week at face value. A quick fact-check would have shown that I’ve written exactly three books since 2006, and one of those was only an edited volume – a weekly book-production rate of only .0096 even if you consider an edited book a book. In fact a comparison of my publishing record to those of my Duck colleagues suggests that if I’m an academic robot, they probably all are too, especially Patrick Thaddeus Jackson and Rodger Payne (and these numbers do not even include their ‘other publications’):* 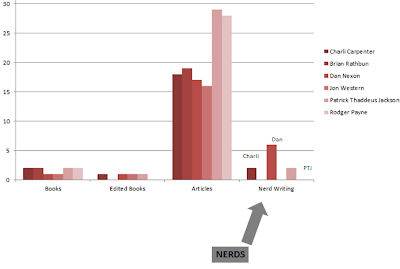 Note however that my publications in the less-than-serious area of science fiction and politics outweigh those of several Duck colleagues, placing me firmly within the Duck nerd block – PROOF OF MY NERD CREDENTIALS.**

3) Regarding the robot conspiracy, nothing could be farther from the truth. While Rathbun unblinkingly echoes the CIA’s claim that I’m heralding a robot takeover, I have in fact been constantly at the vanguard against such a threat, studiously tracking developments in autonomous lethal systems, training my son in weaponry and small-unit tactics in preparation for Judgment Day, and even sounding the alarm when powerful members of our own profession exhibit cyborg-like tendencies.

4) Additionally, I most emphatically dispute Rathbun’s claim that “Battlestar Galactica is just a hobby” for me. This would be like saying that Star Trek, Star Wars, Firefly or Game of Thrones are “just hobbies” for me, or that Harry Potter is “just a hobby” for Dan Nexon. Perhaps if Rathbun would spend more time watching Portlandia and less wasting brain-cells on Downton Abbey, he would understand.

5) Finally, Rathbun might have thought twice about his source’s credibility when s/he referred to my children as “well-adjusted.” Clearly this is not a person who has ever had a look at my Friday Nugget Blogging posts from my days at Lawyers, Guns and Money.

Indeed this piece of writing is so far beneath the quality of Rathbun’s usual astute investigative journalism that one wonders whether Rathbun himself is actually the author. I suggest instead that this particular Canard may be a politically motivated attempt by actual undercover robots within the (artificial) intelligence community to divert the general population from their impending takeover.

Note how the author of this post (whoever it is) makes it sound as if the Cylons of Battlestar Galactica are mere “aliens” rather than themselves lethal autonomous robots. I suspect government elements (including possibly Dan Drezner, a known CIA schill), are behind this blatant attempt at misinformation and mass distraction. I urge my good friend and co-blogger Brian Rathbun to check his anti-virus software, reinforce his fire-walls, and change his passwords. Networked computers will be the death of us all, and this Canard is likely just one more sign of the looming apocalypse.

___________________________
*Data includes only those Ducks whose complete CV I could find online; it excludes those who list only ‘selected publications’ on their websites.
**Of course, I’m clearly not as nerdy as Dan, but remember this is someone who named his child after a character in a fantasy novel so frankly I’d be out of my league trying to compete with him.