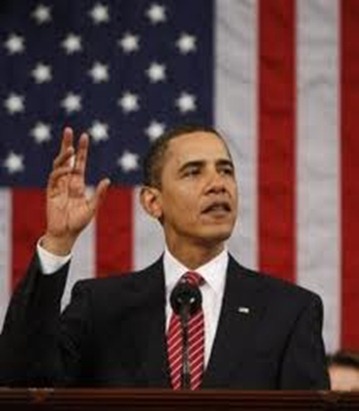 Part one of my response to Obama’s 2012 State of the Union is here.

3. The foreign policy section was weaker and more militaristic than usual. The opening bit about the Iraq war making us ‘safer and more respected around the world’ was jaw-dropping. I guess this really is a campaign speech outreach to the right, because I can’t believe any of the president’s 2008 voters actually buy that line. Does anyone believe that anymore, except for the right-wing think-tank set or something? Wow. Didn’t we vote for Obama because of exactly the kind of Bushian American hubris that can read an unjustified, unprovoked, unilateral assault on another state (which would have provoked howls of rejection by Americans if done by any other country in the world) as a great American victory? Veterans too got a pander wishlist – even though even Michelle Bachmann (!) has come to realize that VA benefits will have to be included in any budget deal.

Next came the deeply disturbing comparison of the US democratic body politic to a special forces team. Wow, again. Really? A wildly diverse, sprawling, open, liberal culture should look to JSOC for its model? We are not a nation of armies, and the discipline and anti-individualism of the military is exactly not what we want in our politics. We want our politics to be open, rich, boisterous, a bit chaotic, even fun; we want a social culture open and tolerant enough to create artists and musicians, entrepreneurs and eccentrics, poets and hippies and weirdoes and all that. This is basic Mill here, not Starshship Troopers. This reminds me of Huntington’s infatuation with a military lifestyle compared to pluralism in the Soldier and the State. The militarization of American culture since 9/11 is terrifying, and that even the president would deploy such analogies is all the more reason to end the war on terror and slow the growth of the military-industrial complex.

Finally, I guess Israel now is pretty much a state in the union: our guarantee is ‘iron-clad,’ which sure sounds a lot like a blank-check for Netanyahu to do something erratic. Iran, here we come! And you’ll notice there was nothing on the much-hyped ‘Asian pivot,’ which I am convinced is bogus, because Americans don’t care about Asia.

4. The 2010 GOP response was so reliably jingoistic, shallow, and self-serving, I gave it its own post. But was anyone else really pleased to see how restrained, polite, and professional Daniels was? I was amazed; I expected Tea Party-style hysteria about un-American influences, appeasement on ‘islamofascism,’ incipient erosion of the Constitution under ObamaCare, betrayal of allies, etc. (Where’s Glenn Beck when you need him?)
Instead Daniels was measured and his concerns reasonable. He called the GOP a ‘loyal opposition,’ rejecting the extremism of the GOP presidential debates about Obama as the greatest threat to American since WWII or something. He noted the president’s upright personal life. Ideally this wouldn’t make a difference in a liberal state’s politics. I couldn’t care less how many wives Gingrich has had, but the GOP has become worse than the nuns of my Catholic grade school on sex. The modern GOP wants to regulate the bedroom and the family, so it is nice to see Daniels admit that Obama meets that standard (hint: Gingrich,Limbaugh, and Rove don’t). He also noted how Obama didn’t create the crisis, even if he bucked how much W is actually to blame.
The criticisms that then followed were fairly reasonable. He’s right that we can’t just keep spending like this. Our status as a reserve currency printer does not permanently insure against a Greek-style run (although it does give us a lot more room to misbehave than anyone thought). The math on middle-class entitlements and debt is pretty terrifying over the next generation.
Here’s Sully again on Daniels, saying something similar. See how nice is to have a midwest Republican speaking like a normal guy? Kinda makes you like Ohio after all, huh?
Cross-posted at the Asian Security Blog.